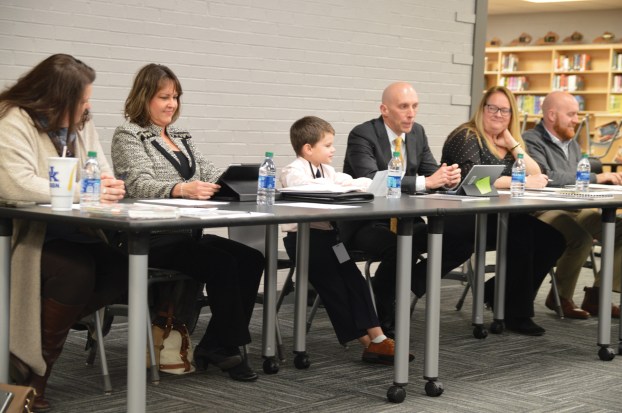 Zyler Hughes, third from left, is seated next to Boyle County Schools Superintendent Mike LaFavers during Thursday night's board of education meeting. Zyler spent the day with LaFavers, including attending part of the board meeting that night, until his parents decided it was time for bed. (Photo by Bobbie Curd)

Boyle County School District received a pretty glowing annual audit from its CPA last week. Accountant Denise Keene told the board Thursday the district received “an unmodified opinion,” which is the “best opinion you can get,” which means “that your financial statements are presented fairly in all material respects.”

“I want to tell you that I brag on your district regularly,” Keene said. “You have some of the best procedures in place. I love the way that you approve purchase orders, the detail that you have for every transaction to make sure that it’s appropriate,” and that the district is commended for its procedures.

Keene went through a summary of the report, pointing out what she felt are highlights. The unassigned fund balance is just over $8 million, which she says is “wonderful because … we moved over $870,000 from the general fund to construction last year, and even with that, we still improved our unassigned fund balance.”

However, the district spent $258,000 more than it took in, which was attributed to the transfer for construction. Keene said this was not something the district needed to be concerned about.

Keene wanted to spend some time talking about food service.

Keene also pointed out that the state’s share of the net pension liability — funding for teachers’ retirement — went down from $113 million in 2018 to $56 million in ‘19. “So, that’s exciting,” she said. “We’ve basically cut our unfunded liability by half. And it is the intention … of the teachers’ retirement to do that for the next several years, and the hope is by 2025, that will be down to zero. … We’re actually making some progress in funding that pension liability.”

Superintendent Mike LaFavers said, “I don’t think that can be stated loud enough, with all the news about pensions underwater, the trajectory that they’re on is by 2025, it could be zero, if they stay on the path they’re on.”

LaFavers said the district has worked five years with Keene for its audits, and thanked her for being so thorough and teaching them along the way.

“You’ve helped us improve our processes. I want to thank you for five really good years,” he said.

The Kentucky Department of Education recommends that after five years, the CPA contract be bid out again, LaFavers said. “Hopefully the next person we have will be as good as you’ve been for us.”

Keene said Boyle is “definitely one of my favorite districts, because your internal controls are really very good, and that means a lot to me, because I want to make sure that you are improving and doing well. I think we have made some progress together.”

Board member Steve Tamme said he appreciated how Keene used the terms “our” and “we” during her presentation. “It feels like that you’ve been really good for our schools.”

Other highlights the audit reported included: