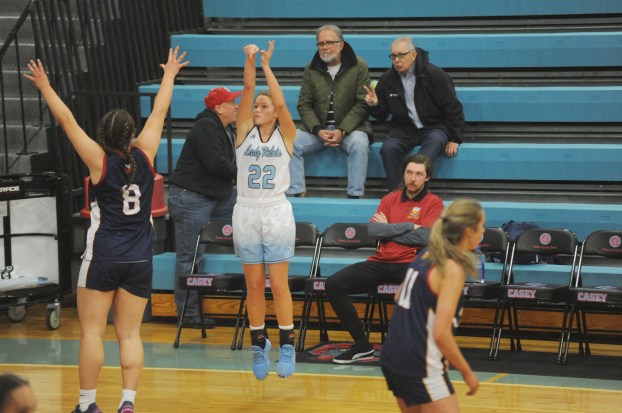 When Gena Cravens hit a 3-pointer — something she has been doing for five years — against Manual on Saturday, it put her in rare company as she became only the third Casey County girl ever to reach 2,000 points.

“To be one of three girls in Casey County history to reach this milestone is truly a blessing,” Cravens said after joining Debbie Miller and Megan Pittman in the Casey 2,000-point club.

Last season Lincoln County’s Emma King and Danville’s Ivy Turner both went over the 2,000-point mark. The year before it was Mercer County’s Seygan Robins. Now Cravens has reached that illustrious level for the 12th Region’s top-rated team this year.

She thinks her first points came on a 3-pointer when she was a seventh-grader but never envisioned becoming such a prolific scorer.

“Honestly wasn’t sure how many points I would end up with at the end of my high school career, but like most girls my goal was to reach 1,000 points,” Cravens said. “Once I got it as a sophomore, my goal was to get to that 2,000 mark.”

She has three senior teammates — Lauren Lee, Natalie Duggins and Jordy Stephens — all over 1,000 points and Cravens credits them and others for her success.

“Most of us have been playing together since third grade and we do a very good job of sharing the ball and playing as a team,” Cravens said. “And my coach, Tara (Weddle), has always made me believe in myself and in my shot. She does a great job of setting myself and my teammates up to be successful.”

The Rebels are 13-5 after Saturday’s loss going into Tuesday’s game at Pulaski County and have faced a schedule loaded with talented teams.

“This season has been a tough one. We have had really hard competition which has resulted in losses that we believe will help us when it does come to tournament time,” Cravens said. “Our goal is to win the 12th Region. We understand the caliber of teams in it, but we have just as good a shot as anybody.”

Cravens is averaging 11.3 points and 2.7 rebounds per game this year while shooting 31 percent from 3-point range. She’s also hitting 88 percent at the foul line.

Despite her scoring prowess Cravens doesn’t anticipate playing college basketball. She has a 4.1 grade-point average and 27 on her ACT and plans to attend Eastern Kentucky University to major in nursing.

“Although I love the game of basketball, I believe this will probably be my last season of playing,” she said.

Her whole family has helped influence her career. Her father was her coach when she was growing up and helped “tremendously” with her game.

“My mom, sister, dad, grandmas and aunt have been to almost every game supporting me and they’ll never know how much that helps knowing that they’re there,” she said.

Her grandfather passed during the basketball season her freshman year.

“Pa has been my guardian angel, biggest fan and the reason I give my all every single game,” Cravens said. “I couldn’t do any of this without them (her family).”

Same with her teammates, especially the seniors.

“Playing with those girls for so many years has been a blessing. We have become so close on and off the court,” Cravens said. “I’ll remember my relationship with those girls more than any award or accolade I will ever receive.

“When my career ends, I will be most proud of how I carried myself and my leadership on and off the court. Basketball is not all about how many points you score or how many awards you receive, but how it will prepare you for your life after ball.”

After the state championship, Boyle County knew that it was going to have to replace a large and accomplished senior... read more