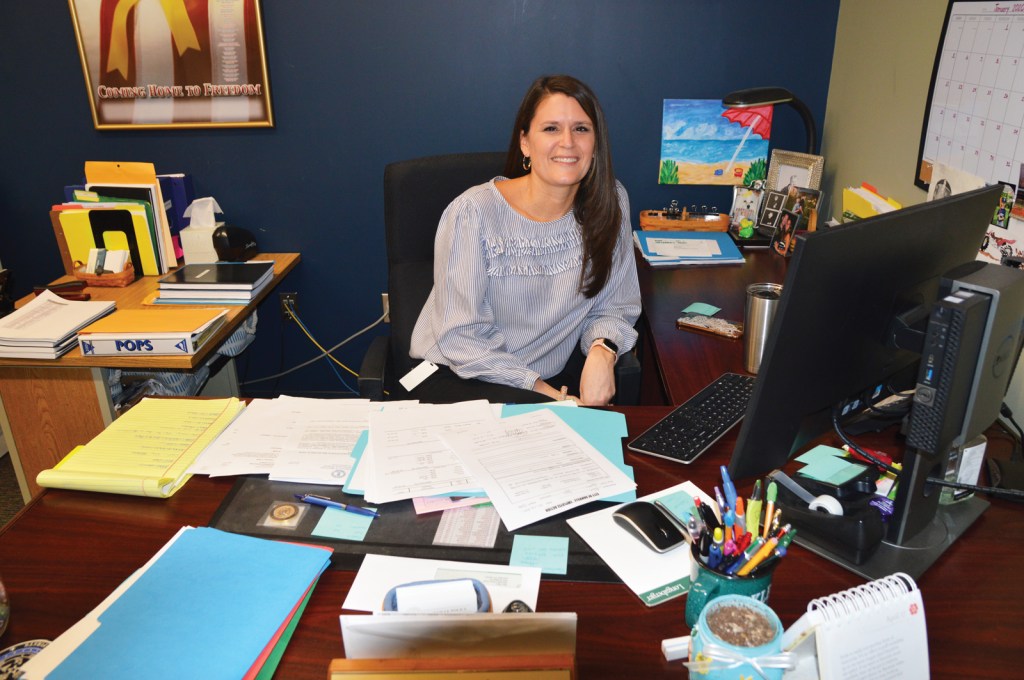 Sandra Curlis sits behind her organized stacks of payroll work on a Friday. She's been the administrative assistant for the Danville Police Department since November of 2016, and loves her job. (Bobbie Curd photos)

“A lot of our responses to questions here are, ‘Go ask Sandra.’” That was Asst. Chief Glenn Doan’s take on how the Danville Police Department’s administrative assistant, Sandra Curlis, helps the organization function on a day-to-day basis.

After spending some time with her on a Friday — which was payroll day, and easy to tell by all the papers covering her desk — it’s clear that she’s considered the nucleus of the office; she’s the go-to woman for officers who have questions on just about anything.

“I try to help them as much as I can,” she says. And if she doesn’t know the answer, she finds it out for them. Doan says it’s not uncommon on payroll day to see a line of officers waiting to see her.

Her work area is situated in an open, middle area between Doan and Chief Tony Gray, just inside the PD’s secure door.

“She doesn’t get to sit there too long without one of us asking, ‘hey, can you check on this or that?’” Doan says. “She does everything from training to proofreading memos …” 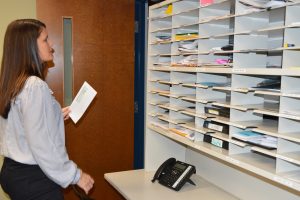 Much of Sandra Curlis’ job is centered around taking care of police officers. Here, she delivers an expense check to one of the officer’s mailboxes.

Curlis has been with the PD since November of 2016, but has worked for the City of Danville for more than 20 years. She began in the finance department, working up front at city hall where citizens pay water bills, then moving on to other financial responsibilities, so doing payroll is no sweat off her back. Curlis had even served as the finance officer before the city had a CFO. Now, she gets officers paid, and does things like organizing training events they must attend, from booking their hotels to getting their meal money.

“They have to have 40 hours of in-service training a year because we’re an accredited agency,” she says. And when they hire a new officer, according to the accreditation requirements, they must be evaluated four times a year, once each quarter. She keeps up with those as well, letting shift captains know when it’s time to hold them, and for what officer.

Today, she’s also working on getting the highway safety grant numbers in. She keeps the past year’s grant information, and runs everything through a program that shows the numbers from traffic incident reports. Next up, Curlis will start getting things together for the PD’s annual report, which shows the numbers on everything.

“I just do whatever comes up and whatever’s needed,” Curlis says. And now that the city is hiring a new human resources director, she’s been jumping in on HR needs whenever she can to help officers.

“I’ve been here 20 years, so I have a lot of experience in things like that, where a lot of officers are newer, and they may not even know who to go and talk to,” she says.

Curlis is married to a Kentucky State Police officer, but everything was still brand new to her when she started with the PD.

“Things like accident reports. We hand out a lot of reports to the public, and I fill in when Cindy (Surber, records clerk) isn’t here. So I was scared to death at first that I was going to give someone something I shouldn’t,” she says.

It took her some time to get used to the procedures, but she got the hang of it.

Curlis says she never really delved into her husband’s job that much until she began with the Danville PD.

“I do really like seeing how all the police procedures work. I’m married to an officer, but I’m not at work with him, so I don’t know everything that he does, and I try not to ask too many questions,” she says.

But now she asks a little more because of what she sees and hears daily.

One of the things that surprised her the most when she began her job was figuring out how busy officers are.

“I don’t think people realize how much they do on a daily basis,” she says. “Whenever I walk into the breakroom, there’s always plates full of half-eaten lunch because they’ve gotten called out. People don’t realize what their schedules are like …”

Curlis can’t find much of anything she straight up “dreads” about her job, other than maybe payroll after holidays. “It can be a pain … having to figure out who worked, figuring out holiday pay …” but again, she comes from a finance background, so she’s used to it. 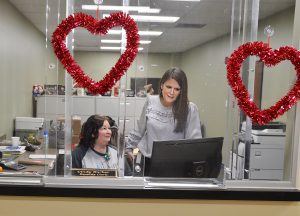 Curlis walks up front to talk to Surber about something in the system, and the two immediately start joking around. Joyce Collins, another city employee, pops by. The running joke by Curlis is that if, “I tell people how amazing I am, they will just think it, too …” she says, jokingly, explaining it all started with what she tells her kids.

Collins joins in. “I think you did tell me that, that you are amazing, so that’s what I’ve always said,” she says, and they all have a big laugh. They say having coworkers who have your back, and who you can laugh with, is priceless. 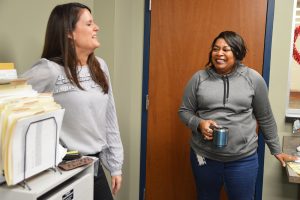 Sandra Curlis and Joyce Collins joke around with each other on a Friday at Danville City Hall. “I just tell people I’m amazing, and eventually they think I am …” Curlis joked. However, her co-workers say don’t let that fool you; “she really is amazing.”

Later, Collins and Surber both say not to let Curlis’ jokes fool me, that “she really is amazing.”

Chief Gray says she’s by far one of the most efficient assistants he’s ever worked with.

“She just gets things done,” he says. “I also call her amazing.”