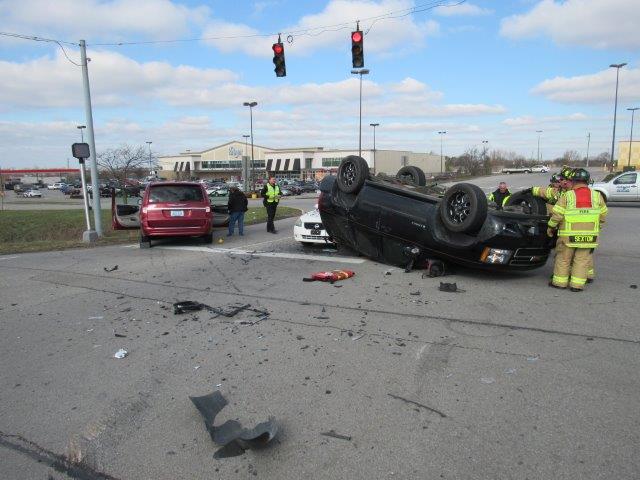 A three-car collision resulted in one vehicle landing on its roof Tuesday in Danville. None of the individuals involved accepted treatment or wanted to be transported in an ambulance. (Photo courtesy of Danville Police Department)

Capt. Chris Matano said that at 10:05 a.m., officers responded to South Fourth and Fackler streets due to an injury collision that had occured in the intersection.

Matano said according to witness statements obtained at the scene, Chris Hamilton, 47, of Danville, was traveling eastbound on Roy Arnold Drive and was in the process of crossing South Fourth Street to continue onto Fackler. He was driving a 2008 Ford Fusion. He collided with a 2006 Cadillac CTS, driven by Josh Southerland, 23, of Hustonville, who was traveling southbound on South Fourth.

Southerland and two passengers — Haven Vaugh, 24, of Hustonville, and a 2-year-old child — were treated at the scene by emergency crews. They were later transported via ambulance to Ephraim McDowell Regional Medical Center for further treatment.

Matano said the extent of their injuries was not known. Officer Clark Logan is the investigating officer.

As the scene at Fackler and Fourth was being cleared, a three-car wreck occurred on the South Danville Bypass/U.S. 150, at the intersection with Skywatch Drive. The call came in at 11:51 a.m., according to a report issued by Sgt. Brandon Record.

Police received reports of an injury collision, which also involved a vehicle rollover in front of Starbucks and Liquor Barn. 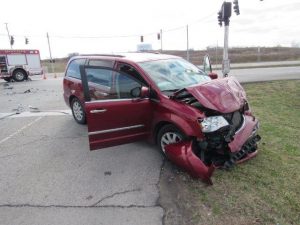 The impact from the van caused Foster’s vehicle to roll over and land on its roof, and the rear of the vehicle also collided with a 2006 Nissan Altima, driven by Marsha Johnson, 59. Johnson was stopped at the red light, facing the bypass, coming out of Skywatch Drive.

Danville City FIre and Boyle County EMS also responded to the scene. Emergency crews tended to all involved parties, but all refused treatment and transport.

The wreck caused traffic to be diverted in the area for about an hour, while crews continued to clear the scene of debris. Officer Brandon Klein is the investigating officer.