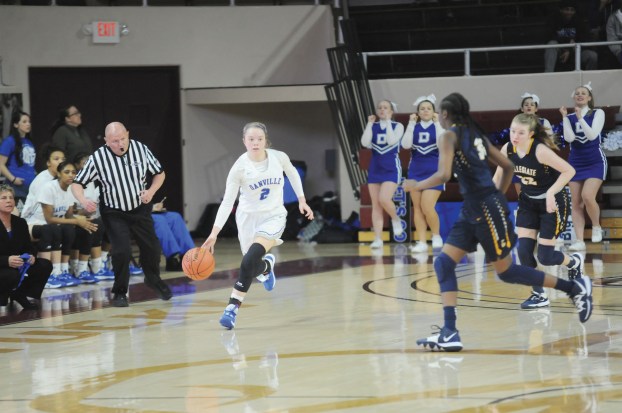 Lara Akers has scored a total of 22 points in the last two games since returning from injury. (Photo Derek Brightwell)

Ads run away from Collegiate, advance to second round

While the Admirals offense eventually came to life in the second half, an old problem hampered them in the first — missed layups.

“We had 20 more shots than them at halftime and we’re up by eight,” Danville head coach Judie Mason said. “We gotta hit our layups and we know that. We’ve been stressing so much about it that I think it’s mental now. So I told them in there, I’m not saying anything else about a missed layup as long as we’re getting those layups. We’re too good of shooters for me to worry about it. The more you dwell on it, sometimes the more it comes back to bite you. I told them in there as long as they’re getting to the lane and getting those shots, I’m going to be clapping for them.”

Danville’s defense kept them in the lead — the Admirals never trailed after scoring the first points on a Jenna Akers three in the games first six seconds — even when their shots weren’t falling.

A big part of that is their vaunted press, which has flustered teams all year and did so against the Amazons on Wednesday.

“We’re not great individuals but we’re great when we all rotate together. It’s pretty when we make it work as a unit,” Mason said. “Getting Cam (Preston) and Lara (Akers) back helps our rotation and it looks a little better. I’m hoping that each game they play, it keeps getting better. Our defense is our key.”

Cam Preston made her official return from an appendectomy in the All-A Regional Final on Friday, but only played two minutes in the win over Somerset. In Wednesday’s win, the junior transfer from Mercer County played 21 minutes and if there was a question of rust, she silenced that with a big performance on a big stage.

Preston scored 11 points, nine of which came in the first half. She also had five rebounds and a steal. But more than anything, her leadership presence was felt throughout the game.

“Cam’s been in that situation before — she’s played in the state tournament,” Mason said about the former Titan. “And the thing about it is — Cam brings something to every aspect of the game. She rebounds, she scores, she plays defense and she knows the game.

“Getting her back — she scared me sometimes because it’s like ‘Honey, you just had an appendectomy two weeks ago and you’re going in full blown against four people and taking it to the basket,” Mason added laughing. “There’s no fear in her and I love that because that’s how I coach.”

But Preston was the only Admiral playing in her second game back from injury — Lara Akers played most of last Friday’s win when she and Ahyana Burnett tied for the team lead with 10 points each. The pair once again matched point totals to lead the team — this time with 12.

Coach Mason said that while it’s great to have those two back, the experience and performance of players who had to step up in their absence was huge and will be key down the line this year.

“Having them back helps, but I am so proud of the kids that hung through when they were gone,” she said. “There’s eight kids who make this team go. Having them back, yes it helps, but we knew that with them out, somebody was going to step up and we did step up. It’s a pleasure to have them all back because we have a full rotation.

Cam and Lara are juniors — we’ve got six juniors and Des (Tandy, freshman) and Tyliah (Bradshaw, sophomore) and I expect them to play that way and be leaders. And I expect all of them to be leaders. Not only is is it good to have Cam and Lara back, it was good for the rest of them to accept them back and look for them, too.

“That’s the beauty of being a team. We’d play 1-on-1 otherwise,” she continued about the players who stepped up. “The beauty of this game is five people have to play together to make it look pretty and that’s what they did today. Especially in the second half.”

Danville will take on Glasgow in the second round. It’s a familiar opponent for coach Mason, if not for the current Danville roster. The last time the Ads advanced beyond the first round of the All A State Tournament was in 2014 when they advanced to the championship to face the Scotties.

“Glasgow knocked us out of the championship game the last time we got that far — beat us by two points. I’m going to use that as motivation,” Mason said. “They’re a nice ball club. I’m a coach that doesn’t look forward so I haven’t looked at them yet but as soon as this one was over, I told them to go get film. I know they’re big and athletic and I know we’ll have to make layups to win. But I will say this — I know my team will compete.”

RICHMOND — Two weeks ago when stars Lara Akers and Cam Preston went down with injuries before the Boyle County... read more