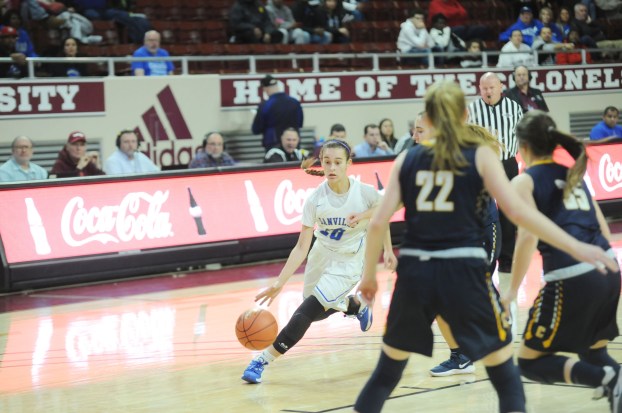 RICHMOND — Two weeks ago when stars Lara Akers and Cam Preston went down with injuries before the Boyle County game, Danville coach Judie Mason challenged her team to step up and win in their absence.

They did — winning three straight before the pair returned and now up to five straight.

One of the players that stepped up in a big way was junior point guard Ahyana Burnett.

After the Boyle County win — in which Burnett had 14 points and five assists — Mason praised the junior for “stepping up and running the show”.

In the next game against Lincoln County, as one of the smallest players on the floor, she finished one rebound shy of a double-double.

And when Akers and Preston came back on Friday in the regional final against Somerset, Burnett tied for the team lead with 10 points and pulled down six rebounds.

Which brings us to Wednesday’s win over Louisville Collegiate.

Now at essentially full strength, the fruits of having to win down two of their leading scorers began to show when Burnett stayed at the level she’d been in the previous two weeks.

She tied Lara Akers for the team lead with 12 points and five steals, and led the team with six rebounds and six assists.

“Ahyana was my MVP today,” Mason said after the game. “She took the ball to the basket and made everything else happen and took care of the ball and she guarded their best player. That girl number 35 (Trinitie) Sutton is averaging 18 points a game and you saw there’s no shot she’s not going to shoot. Ahyana was the one in charge of marking her like you would in soccer and made sure she didn’t get the ball. She was playing on both ends of the ball. She was huge on that.

As Danville goes for the All A State Championship and then turns its focus on the rest of the season — including navigating a tough 12th Region — the elevated play of everyone will be key. And Burnett has been doing her part so far.

By LARRY VAUGHT When Gena Cravens hit a 3-pointer — something she has been doing for five years — against... read more