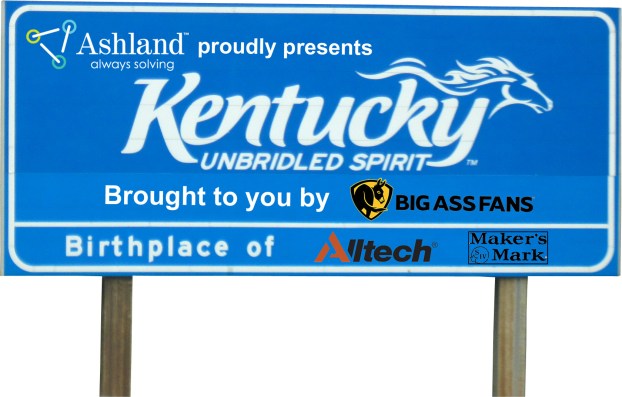 When does advertising go too far? There are advertisements on TV, on radio, in this paper, on websites, in your mail, in your social media feeds, on billboards, sandwiched between YouTube videos, in your smartphone’s notifications, on your favorite team’s stadium …

Advertising these days is overwhelming and invasive, but there are some places advertising shouldn’t go — and right now, it doesn’t. But Kentucky legislators have a chance to change that this session with House Bill 160.

The legislation would enable commercial sponsorships for Transportation Cabinet roads, bridges, tunnels — and even vehicles.

The hypothetical funds paid by businesses to slap their names on these previously ad-free spaces would help prop up the state’s road fund, which is definitely in need of some propping up.

But what are the costs that come with whatever sponsorship dollars this legislation might enable?

“Why not include all state facilities in the ‘naming rights.’ Think of the many possibilities if state-owned buildings were included,” Thompson writes. “Maybe the Valvoline Oil State Capitol Building? ‘Come visit your state Capitol and get a $15 off coupon on your next oil change.’ Or go across the street to visit the ‘State-of-the-Art Toyota Governor’s Mansion where there’s a new model every year.’ The possibilities are endless.”

There’s plenty of fun to be poked at HB 160, but the important point is this: The bill would erode the foundation of our democracy by changing who funds our government.

HB 160 is a step down a path that leads toward corporate oligarchy — a government funded by, and therefore run by, big businesses. It’s because taxpayers are the funders that they have the power to tell government what they want. That power shrinks if legislation like this gives that funding power to commercial businesses.

HB 160 is an attempt to find some much-needed road funding without raising taxes. It may be politically expedient in accomplishing that goal, but it sells off a small piece of Kentucky’s democratic soul in the process.

EDITORIAL The Advocate-Messenger A bill that would outlaw female genital mutilation in Kentucky is moving forward speedily during this year’s... read more