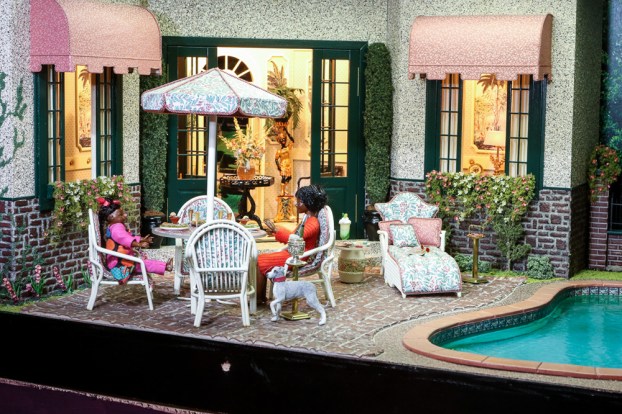 A mother and daughter enjoy a meal by a pool in a roombox by Brooke Tucker. (Photos submitted)

Dolled up for February

“Seniors and retirees are among our most ardent fans,” says Lori Kagan-Moore. She’s director of The Great American Dollhouse Museum, and has decided to offer local senior citizens free admission on Wednesdays and Fridays, throughout the month of February.

She says the move is in celebration of Black History Month, and is being done in conjunction with the Danville-Boyle County African American Historical Society, Citizens Concerned for Human Relations and the Heart of Danville. All that seniors — ages 60 or older — must offer is proof of residence in Danville or Boyle County to enter free.

She says the organizations are public relations co-sponsors of the month-long event. “Although no funds are involved, the museum is delighted to be working with these important community organizations.”

Kagan-Moore says she’s also excited about the new offering at the museum — an installation of a 10-foot photographic storyboard of the history of the museum’s building, which chronicles, in one section, the life and contributions of William “Bunny” Davis. “Davis was a beloved figure in the Danville community, in politics, sports, and business, and we thought it was important that his life and accomplishments be publicly chronicled in a permanent display here in town.”

She says senior citizens often love the history lessons, as well as the funny captions and stories of the foibles of the townspeople, which accompany the displays. 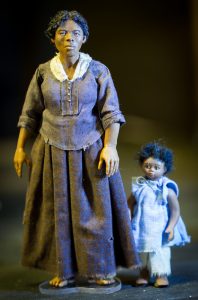 Harriet Tubman, by Sharon Cariola, is seen in part of the Underground Railroad display. (Photos submitted)

“They often remember much of what is depicted in the museum, from early washing machines to the old garment factory. Kentucky seniors often tell us that they grew up or had relatives in the coal mines, or in tobacco, and that they love our tobacco warehouse and our coal mining camp.” Kagan-Moore says some worked or had relatives who worked in Danville’s own Palm Beach company, “and they recall scenes similar to our Copper Hollow Clothing Company,” a specific display in the museum.

“It is also the case that we live in a place where seniors have more expendable income and more leisure time than any other demographic, so most of Danville’s civic organizations are supported by, and frequented most heavily by, seniors.”

Kagan-Moore says that because the particular focus of the museum is United States social history, it is important to showcase the histories of the many and diverse populations that make up the country. 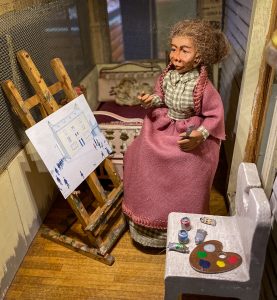 A painter is seen at work in a rented room in the fictional town of Copper Hollow, Kentucky. (Submitted photos)

“Not only is it important for us to be diverse in order to be accurate, but the Dollhouse Museum also wanted to bring to Danville an attraction inclusive and representative of people from a wide variety of ethnic, racial and socioeconomic backgrounds.” She says Black History Month is the perfect time to offer a special opportunity for seniors to visit the museum as its guests, for free.  “At the museum, you will see an exhibit of Native American art, an underground railroad exhibit, an early Mexican-American village, among others representing the country’s diverse origins. In the fictional miniature village of Copper Hollow, You will visit 1910 shops much like those In Danville’s downtown, with owners and upstairs tenants from varying backgrounds. In the Museum’s Copper Creek Coal Company, and in our clothing factory, we have replicated inclusive populations that would have been expected in 1910.”

The museum showcases U.S. history in miniature, with a particular focus on Kentucky history. Kagan-Moore says it is known for its miniature neighborhoods and timelines that include “one of the nation’s most extensive collections” of ethnically, racially, and socio-economically diverse dolls.

“Sometimes people mistakenly believe we are a doll museum,” she says. “What you see here are interconnected miniature buildings and scenes that showcase different periods of time in United States social history. Most importantly, we are about storytelling: the fictional stories of the people living in the hundreds of miniature buildings, the stories of history, and the story of the art of creating scale models.”

A Danville distillery project hit a snag Wednesday morning, when the developer and the Planning and Zoning Commission couldn’t agree... read more