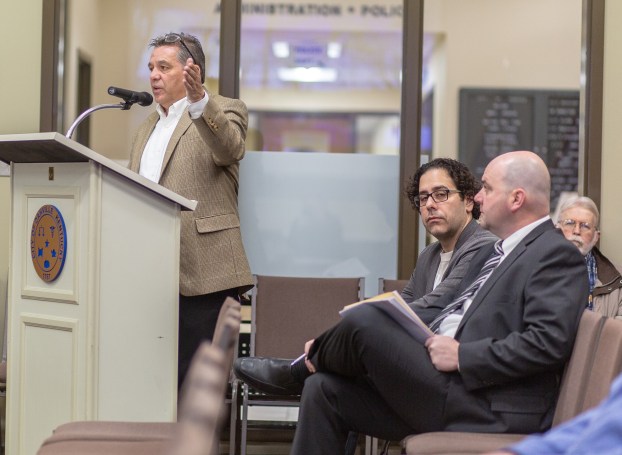 A Danville distillery project hit a snag Wednesday morning, when the developer and the Planning and Zoning Commission couldn’t agree on conditions for a zone change.

But the zone change to “light industrial” requested for the Luca Mariano Distillery project hasn’t been rejected — it’s been tabled in hopes the developer can return with proposed conditions that would satisfy commissioners’ concerns.

Those concerns focus mostly on ensuring:

P&Z Director Steve Hunter said his “main concern” is making sure Luca Mariano commits to improvements along Ky. 52 before it adds a commercial entrance on the roadway.

The state does plan to improve Ky. 52 in Boyle County at some point in the future, and if the state’s upgrades can satisfy the necessary safety improvements, that’s fine, Hunter said. But if the state project doesn’t happen fast enough — it could easily be five or even 10 years away, Hunter said — then he would like to see Luca Mariano promise to improve the roadway itself before it creates any substantial traffic flow with an entrance.

Ky. 52 is currently a two-lane highway with narrow shoulders, with multiple curves and elevation changes near its intersection with Stanford Road. Hunter said he thinks a shared center turning lane on Ky. 52, as well as separate turning lanes from the distillery property onto the highway, could be appropriate upgrades to ensure safe traffic flow.

“We think this part of 52 is the developer’s responsibility if the state doesn’t fix it,” Hunter said. “… I’ll call it a deal-breaker for the staff, if you want to call it that.”

Hunter listed numerous other potential conditions that could be imposed on the zone change under “staff items of concern” in the commission’s zone change report. They include:

Luca Mariano has provided a phased diagram and other drawings showing plans at a conceptual level for rickhouses to store bourbon barrels, a bottling plant, a distillery building and a visitors center. But Hunter said “you never say never in this business” and plans can change.

“If we zone all this property light industrial, what would stop someone from cutting off 10 acres and selling it tomorrow? And there could be a body shop there, in light industrial?” Hunter asked. “It’s not their intention, it’s not probably what the neighbors want to see, but what in this application that’s been filed commits to that?

“Things change in the real estate business; things change in the development business. We need commitments. That’s why the zoning ordinance requires them; it’s why the comprehensive plan suggests them. … I don’t think it’s too much to ask to say there won’t be any body shops or whatever.”

The distillery applicant, LMD Holdings LLC, did include one proposed condition with its zone change application — that it would conduct a traffic study in the future, “if necessary, as development proceeds and future site plans meeting the threshold for a traffic impact study are contemplated.”

Hunter said he sent suggestions for added conditions to LMD Holdings, but got no response back before Wednesday’s public hearing.

Matt Froberger, an attorney representing LMD Holdings and Luca Mariano owner, Francesco Viola, said he doesn’t believe the P&Z Commission is required to place conditions on a zone change and “it’s way too premature” to be placing conditions on the development.

“These all may be good conditions, things we will agree to in the future, but it’s premature now,” Froberger said.

Viola told commissioners the Luca Mariano distillery is a long-term project and nothing is being opened on the property soon. But if the zone change is approved, he can move ahead with things such as landscaping and exercising an option he has to purchase the land. According to LMD’s narrative in the zone change report, LMD owns around 18 acres of the land, while American Farm Investors owns the other 256 acres.

“This is a project that’s going to take — what we have put together is 15 years. It’s not going to happen overnight,” Viola said. “To put conditions on it at this point doesn’t make a whole lot of sense to us.”

But P&Z Chair Jerry Leber said approving a zone change to light industrial, which allows a wide variety of uses, without conditions on the change is equivalent to writing a “blank check.” He said he couldn’t support such a move with his vote.

Hunter said every zone change in Boyle County going back decades has had some number of conditions imposed by the P&Z Commission. Without more conditions than the promise of a future traffic study, Hunter said “I don’t see how this protects the neighbors.”

P&Z Commissioner Terry Manon said it should be fairly easy to draft some conditions that err on the high side of estimates for things such as square footage or development footprints.

“To give us almost nothing and then ask for a zone change on almost 300 acres is not something I can vote for,” he said.

Viola said if the commission didn’t approve the zone change, it could delay the project substantially because his other work would make it difficult for him to return for another P&Z meeting until the fall.

But others said the P&Z Commission could call a special meeting or an attorney could represent Viola’s interests at a future meeting, after conditions acceptable to everyone have been developed.

The commission ultimately voted for a motion from Manon to table the zone change to allow LMD Holdings and P&Z staff to develop agreeable conditions.

Before the vote, Commissioner Jim Boyd assured Viola and Forberger there is support for their ultimate goal among commission members.

“I think most people in this room would love for you to have a distillery there,” Boyd said. “It’s good business … (but) the 52 access is a deal-breaker for me. … We want your development, we just want some assurances.”

Viola first announced his plans for a distillery on the east side of Danville in 2018. The P&Z Commission amended its future land-use map last year to allow the project to move forward. Viola has said he could invest between $20 million and $50 million over many years in the project.