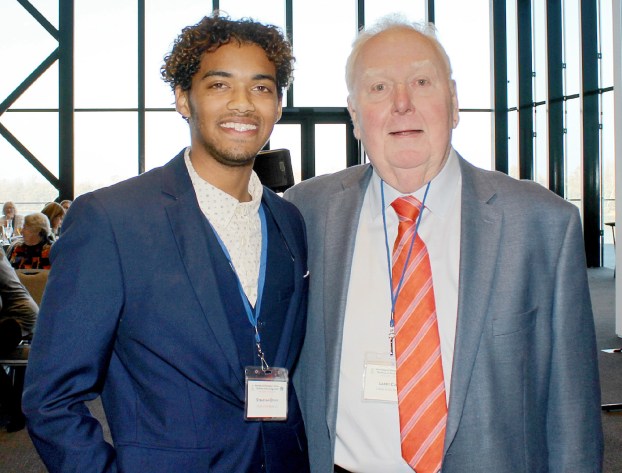 Larry Cullen, right, stands with Sybastian Dunn, a former foster youth for whom Cullen worked on behalf of as a court-appointed special advocate. Dunn presented Cullen, of Danville, with the 2019 Kentucky CASA Volunteer of the Year award in November. (Photo contributed)

Danville man is Kentucky’s CASA Volunteer of the Year

A Danville man was chosen as Kentucky’s CASA Volunteer of the Year for his work on behalf of children caught up in the family court system. 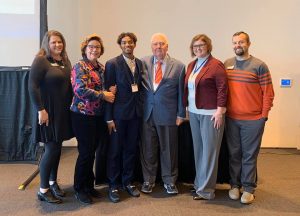 Larry Cullen was honored at the Kentucky CASA Network’s annual conference, held in Owensboro in November.

“I was shocked and amazed” to receive the award, said Cullen, who retired and moved to Danville from Chicago with his wife almost five years ago.

Court-appointed special advocates, or CASAs, are appointed by family court judges to cases involving abuse, neglect or dependency of children. They are trained to study their assigned case, get to know the children, interview adults who interact with the children and present reports to the judge about what they find.

Cullen said he’s been a volunteer for the local CASA of the Bluegrass organization for around four years. His award was the result of one particular case he worked on, involving a teenage boy who was “aging out of the system” — he was going to turn 18 without having been placed in a permanent home.

“This young man wanted to go to college, but he wanted to go to a Christian school and the state didn’t want to pay,” Cullen said, explaining how the state covers tuition to public universities for all foster children, but not private or religious institutions. 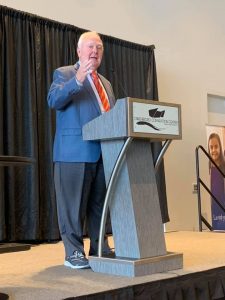 Cullen and others talked to the teen about going to a public university instead, but he was “bound and determined that he wanted to go to a Christian school.”

“I was sitting at home one day, kind of thinking about this, and I thought to myself, ‘Well, Gov. Bevin, this is for all practical purposes your child — he’s in the state’s care. If the boy wants to go to Christian school and you espouse Christian values …’ So, I wrote to the governor.

“I thought it would go nowhere.”

But Cullen got the former Kentucky governor’s attention and there followed “a lot of back and forth” amongst state officials, he said.

Ultimately, the state refused to pay — “they weren’t going to set that precedent,” Cullen said. But because there was now attention on the young man’s situation, he was able to get his tuition covered another way, he explained.

“That’s what this is all about. That’s why I stood out amongst other CASA volunteers around the state,” Cullen said. “But having said that, I was still shocked as hell that I got this award.”

Cullen’s CASA supervisor Tami Wilson was probably not as shocked as Cullen.

“Larry Cullen is one of the most genuine, witty and giving persons I have had the honor of meeting through CASA,” Wilson wrote in a letter of recommendation for Cullen. “He is a volunteer who is always giving his time, talents and heart. He is a fierce advocate for the children he serves. Larry is a champion of CASA at every turn.” 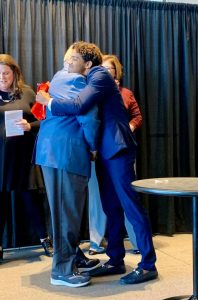 Cullen was given his Volunteer of the Year award by Sybastian Dunn, a former foster youth who spoke about Cullen’s impact on his life, according to a news release from CASA of the Bluegrass.

Cullen said he only began volunteering as a CASA once he moved to Danville. He was familiar with the program from when he used to live in western Kentucky. But he said the justice system in Chicago “is just so radically different, I don’t know that you could have made much of a difference up there. Down here, you can.”

Cullen said he volunteers because “it needs to be done.”

“Kids — a lot of them are floundering and they need somebody to guide them through the system,” he said. “I think it’s important that they have somebody that’s looking out for only their best interests and doesn’t allow them to get ground up in the system.”

Cullen said the local CASA organization is well run and the local family court judge, Bruce Petrie “does a remarkable job” — both facts that make him happy to continue volunteering.

“(Judge Petrie) pays attention to what the CASA on the case says and recommends,” he said. “I probably wouldn’t still be doing it if I didn’t feel that it was worth the effort you put into it. Judge Petrie actually asks you in court, ‘Do you agree with this?’ ‘Do you have any other ideas?’ He acts like CASA is important and I think that’s probably not the case in all family courts.”

“If you go sit in family court — which you can’t do, because it’s closed — you just shake your head at where this society has gone,” he said. “It’s really kind of a shock to the system to see that there’s such a problem out there and so many kids are left to flounder because their parents — most of them, it’s drug-related. … It makes you concerned about where things are going.”

For more information about CASA of the Bluegrass or how to become a CASA volunteer, visit casaofthebluegrass.org.