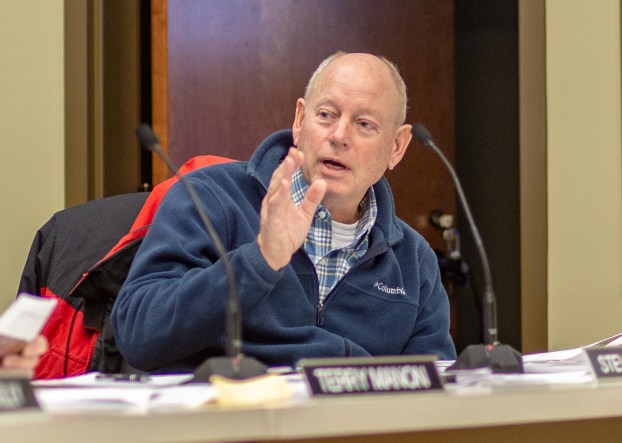 P&Z Commissioner Jim Boyd made the motion Wednesday to approve amending the future land-use map to allow for moderate density development on a 4.2-acre tract of land in south Danville, near Hogsett Primary School. (Photo by Ben Kleppinger)

Plans to build new homes near Hogsett Primary School in south Danville took a step forward this week. The Danville-Boyle County Planning and Zoning Commission agreed to amend its future land-use map to allow for moderate-density development on 4.2 acres of land that border Baughman Avenue and Franklin Avenue. 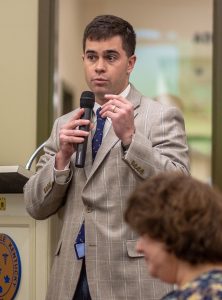 Wesley Carter speaks to the Danville-Boyle County Planning and Zoning Commission Wednesday about his plans for a development in south Danville. (Photo by Ben Kleppinger)

Wesley Carter, a Danville resident and an associate vice president at Campbellsville University, applied for the map modification. He said he wants to add a private drive into the heart of the property and build condominium units that would be part of a home-owners’ association.

“I have the opportunity to help provide higher education in this region, and through that I have learned very keenly how difficult debt is,” Carter testified during a public hearing on the map amendment Wednesday.

There are people who are unable to buy homes that cost more than $150,000 because of their student loan debt, Carter said.

“Our intent is to build nice, efficient homes that can be sold for less than $150,000 — ideally, a fair amount less than that,” he said. “Our desire is to help people have a very positive experience in this neighborhood or this association.”

Carter said “economics drive” the development of the land — the project isn’t financially feasible unless a certain number of houses can be built.

“With regard to this specific parcel, if we have the opportunity to develop it, there doesn’t need to be extreme volume, but there does have to be a little bit of volume and a little bit of density in order to make the numbers work and in order to fulfill our goal of being able to sell these inexpensively.”

Carter said all of the homes would have between 1,000 and 1,300 square feet, three bedrooms, two bathrooms and a connected garage.

A preliminary design drawing showed how a new road could be built at the end of Franklin Avenue to provide access to the property, most of which sits behind existing homes on Franklin and Baughman. The property also touches Baughman in one place, but P&Z Director Steve Hunter said there’s a sinkhole in the area that would complicate using that connection for roadway access.

No one testified in support of Carter’s request at the public hearing; two neighbors who live near the property said they had concerns about the density of homes being proposed and the amount of traffic it would generate.

Joyce Zinner, who lives on Baughman Avenue, said if there are 36 units built, it would generate a lot of traffic for Franklin, which is a narrow, dead-end road. It would also be a lot of extra traffic for Baughman — including foot traffic, which could be problematic since Baughman Avenue never had sidewalks built as residents had been promised many years ago, she said.

“We’d love having more neighbors, but maybe not 36 units,” she said.

Charles Hinkle, who lives on Franklin Avenue, said if Franklin needs to be widened to handle the additional traffic, it would eat up a lot of people’s front yards, which are already not that deep. He speculated that 36 units could mean “75 more cars going up and down” Franklin.

“Franklin is just too narrow to be running another 75 cars down there,” he said.

Hunter said specifics such as number of units and traffic flow would have to be addressed by the City of Danville and considered by the P&Z Commission at future hearings. Wednesday’s public hearing was only for considering whether an amendment to the future land-use map to allow for some kind of moderate-density development on the land was appropriate.

Carter noted he owns multiple properties on Franklin Avenue, which may aid him in the future if a widening of that road is deemed necessary.

A natural gas pipeline travels under the center of the property, which was brought up during the public hearing.

Joyce Fallwell, an engineer working for Carter, said there would not be any homes built directly over the gas line — that area of the land would instead be open, shared space.

“It will be a nice place to walk your dog,” she said, adding that there could also be picnic tables.

Hunter said Carter will have to go to the City of Danville with more specific plans, and the city could determine conditions that would be necessary for the development to progress — such as changing the planned entrance from Franklin to Baughman or improving Franklin.

Add in the sinkhole problem near Baughman and the gas line and “there’s definitely challenges on this property,” he said.

P&Z Commissioner Jim Boyd made the motion to approve the map amendment, while also assuring those in the audience that nothing was a done deal yet.

“I think you’ve got a great idea with … affordable housing in Danville,” Boyd told Carter, before noting how the P&Z Commission had tabled the case of a prior applicant that same day, who had gained approval for a map amendment but didn’t provide satisfactory conditions when it returned for a zone change request.

“We’re going to have a lot of conditions” when Carter’s project returns for a zone change, Boyd said.

Also on Wednesday, the P&Z Commission:

More than $6,000 in grant money has been awarded by the Danville Schools Education Foundation and Alumni Association to fund... read more