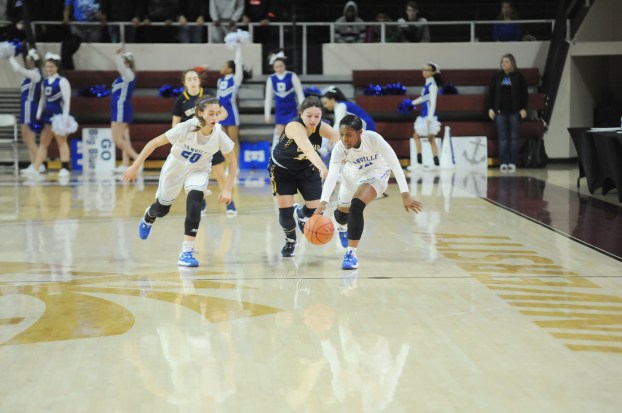 Ayhana Burnett (20) and Tyliah Bradshaw come up with a steal after trapping Collegiate's Trinitie Sutton in the halfcourt on Wednesday. (Photo Derek Brightwell)

‘Team effort’ required for Ads in All A second round

After Wednesday’s win over Collegiate set up a second round match against Glasgow, Danville coach Judie Mason immediately requested some film of the Scotties.

“I’m a coach that doesn’t look forward so I haven’t looked at them yet,” she said.

After she got a chance to look at them, one player immediately stood out — Ashanti Gore.

“The big girl on the inside, number 00, is big for them. Bigger than anybody we’ve got — taller and stronger,” she said about the Glasgow senior. “We’re going to have to play team defense on her, keep her out of the lane and limit her to one shot.”

Team defense will be the name of the game for Danville if they want to Saturday’s semifinals. Fortunately, team defense is one of the Admirals’ calling cards.

“Our team defense has really come along the last two weeks. Especially when Lara (Akers) and Cam (Preston) were out, we had to play defense to win because that was two of our leading scorers,” Mason said.

In addition to Gore — who stands at six feet — Glasgow has another girl taller than anyone on Danville’s roster in Anzley Adwell who is listed at 5-11. The pair leads the Scotties in points — Gore averaging nearly 17 points per and Adwell at 14.3 — and rebounds with Gore averaging a double-double a game.

Stopping those two players — or at least slowing them down — will be the focus of Danville going into the game, but Mason knows that just doing that won’t be enough to lock down a victory.

“That’s our strategy going in but other kids are going to step up just like we’ve had other kids step up,” she said.

Despite the size disadvantage Danville has going into Friday morning’s matchup, don’t expect to see a timid Admiral team that is content to settle for mid-range jumpers.

“We have different lineups that we can put in. We can go small, we can go big or we can do a mixture,” Mason said. “We’re going to play our game. We’re not going to ever let anyone intimidate us and keep us from doing what we’re doing. We’re going to continue to take the ball to the basket and not worry about what they’re going to do to us.”

If team defense is the key to moving on in the All A State Tournament, the lock it goes into is Danville’s press. Coming off a two week stretch that forced her to go deeper into her bench than normal, Mason believes that her team’s depth will allow them to wear out the Scotties.

“Hopefully we can pressure them and get them into a running game with us,” she said. “I feel like we’ve got more depth and we’re hoping our conditioning will pay off.”

In addition to the depth, the Ads also have the experience advantage — unusual territory for a team with no seniors — but that might not be an edge, according to Mason.

“A lot of times when you’re young you don’t realize there’s pressure so (being more experienced) can backfire on you sometimes,” she said. “I’ve taken kids that were eighth graders or freshmen and they dominated because they didn’t realize they were in a state tournament. We just have to take care of business. To be honest, it doesn’t matter if you’re 18 or 14 — you’ve got to put the ball in the basket and that’s what we gotta do.”

But ultimately, as basketball so often does, it comes down to who makes shots and who plays better as team.

“We have to stay out of foul trouble. We’ve got to play as a team,” Mason said. “Like I told you last night — we’re not great as individuals, but when we’re all on the same page and we’re communicating and working as one unit, we’re pretty good. That’s what we’ve got to do. We got to find a way for all five people on the floor to have a common goal and go toward what we’re trying to do.”

Danville and Glasgow play the second game of the day at the All A State Tournament held at EKU’s McBrayer Arena. Gametime is scheduled for 10:00 a.m. Friday morning.

When Chuck Smith announced his retirement before Christmas break, it sent the rumor mill in overdrive. The biggest question on... read more