In his 20-plus years at the helm of Centre College, John Roush compiled a list of accomplishments that would be the envy of virtually anyone in the field of higher education. He has overseen growth in student enrollment, annual accolades for academic and athletic achievements, expansion of study abroad initiatives, significant fundraising campaigns and corresponding capital projects, and he focused the international spotlight on Danville not once, but twice with vice presidential debates. 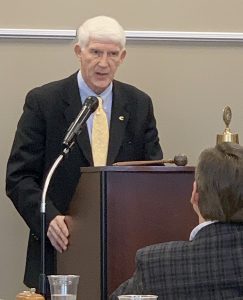 As his tenure draws to a close this year, those who attended the Danville Rotary Club meeting recently got the distinct impression that one of his greatest thrills is interacting with students–something he gets to do often on such a small campus, and something that is even more intense during the three-week intercession between fall and spring semesters when he teaches a class on leadership, titled, “Rainmaking.”

“We cannot direct the wind, but we can adjust our sails,” said Roush in opening the condensed version of his leadership narrative for Rotarians. He added that none of us hold the power to direct the wind, so it falls to leaders to adjust the sails correctly in order for progress to ensue or continue. He further advised that being smart is a prerequisite, but that leaders who rely solely with intellect haven’t a chance to succeed and often destroy. In other words, be just smart enough but look to other attributes — tangible and intangible — as means of defining true leadership.

Citing Canadian journalist and author Malcolm Gladwell, Roush says that extraordinarily successful people “need to have the emotional intelligence to possess the capacity to work with others, to negotiate, to communicate, to work as a member of a team, and to understand the importance and value of culture in an organization.”

Roush went on to discuss what he called the seven qualities of person crucial to good and effective leadership. They are, in order of importance:

Leaders who deserve to be followed are men and women of good character–the highest of compliments that can be bestowed. “Reputation is what men and women think of us; character is what God and angels know of us,” said Roush quoting 18th century philosopher Thomas Paine.

Roush went on to add that character defines leaders because of what they do when no one is looking; what takes place when there is no promise of applause; and when doing good is done for no other reason than it needs to be done.

Roush and Centre’s first lady Susie, who has also contributed importantly to the greater good in Danville as a member of several boards and community task forces, will leave the college after 22 years on June 30. Their long-term plans have yet to be finalized. But most certainly the community will be a better place for their having been here. And the leadership skills he imparts to his students will follow them wherever they go as the next generation of leaders take their position on the public platform.

“One can easily judge the character of a person by the way they treat people who can do nothing for them in return.”

Kentucky’s pretrial drug program could offer help for some,…