Kentucky’s pretrial drug program could offer help for some, but its scope is limited 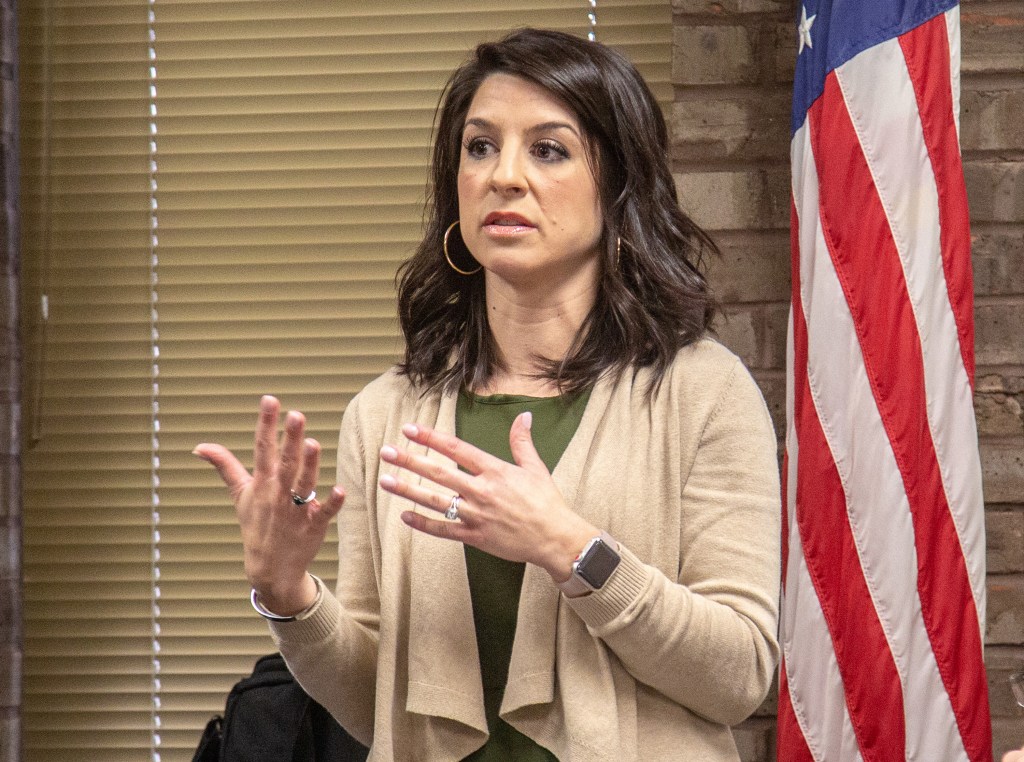 Paige Lutz, program administrator for the Department of Corrections' Pretrial Substance Abuse Program, briefs local criminal justice leaders about the availability of the PSAP as an option for some defendants during a recent meeting of the Criminal Justice Coordinating Council. (Photo by Ben Kleppinger)

Some people dealing with drug addiction find help through treatment programs that are made available after they’ve been found guilty of a crime. Others may make their way into treatment without becoming involved in the criminal justice system.

But there’s also a chance at treatment available for people who find themselves in the gray area in between — people who have been arrested and charged with crimes, but are still considered innocent until proven guilty.

These pretrial defendants can be eligible for Kentucky’s pretrial substance abuse program, or PSAP. It’s a treatment program run behind bars, inside local jails across the state.

Boyle and Mercer counties have a substance-abuse program for state inmates in their local jail, which is qualified to accept defendants participating in the state PSAP. But they are also among the majority of Kentucky counties that do not utilize the PSAP option.

Out of the state’s 120 counties, there are 15 that regularly refer defendants to the PSAP, according to Lisa Lamb, director of communications for the Department of Corrections.

Non-violent, non-sex-offense defendants who have allegedly committed a drug crime or can show they have a drug-abuse problem can participate in the minimum six-month treatment program, according to Paige Lutz, PSAP program administrator for the Department of Corrections. Completing the program can potentially help a defendant avoid a felony on their record, depending on what the judge and prosecutor agree to — but there’s no guarantee participation will affect the outcome of a case, Lutz explained.

The PSAP has been available for around a decade — it was created by a 2009 bill and implemented by the DOC in 2010, according to Lamb.

A tool with limited scope

Boyle County Jailer Brian Wofford said he supports the PSAP as an additional tool in the toolbox for criminal justice officials. His jail’s substance-abuse program for state inmates would be able to accept local defendants who qualify — and when those defendants are moved from the county side to the state side of the jail, there would also be a cost-savings involved for local government, he said.

The state covers the daily cost of each inmate participating in the PSAP, as well as the $9 daily charge for the substance-abuse program itself, Wofford explained, meaning they’re essentially taken off the local government’s dime while in the program.

“Instead of just laying there for six months, they’re going to be getting treatment, which is hopefully fixing that core issue so they stop coming back to jail,” Wofford said. “… I think it’s a win-win for everybody.”

Wofford acknowledged going through treatment in jail instead of in the community is not going to be right for everybody, but said it could be right for some — especially people for whom community-based treatment programs outside jail have not been successful.

Danville public defender Jessica Buck said she has had clients in other jurisdictions for whom the PSAP was helpful. But she cautioned against thinking the program should be a “first-line option” or a magic solution to drug addiction problems.

“I do think it is a good program for a certain type of defendant. I certainly wouldn’t want it to be used as the first option we go to, since it is six months in custody,” Buck said. “That is a long time for someone to spend behind bars without having had the opportunity to do in-patient or out-patient community-based treatment.”

Buck said the circuit and district judges for Boyle and Mercer counties are also better than most around the state at considering and allowing defendants out of jail to go to community-based treatment programs. One of those programs is the Shepherd’s House intensive outpatient treatment program, which provides counseling, job training and more for former inmates, who are released from the local jail while they participate.

“I would hate to see PSAP change that, because I think it’s for two different types of defendants,” Buck said. “… I don’t see it as a first-line option, especially in a community that has the Shepherd’s House program that has been so successful.”

Veronica Hunt is an administrative branch manager for the Department of Corrections. She said providing drug treatment programming for people while they are in jail can be beneficial for some people because they’re unable to go AWOL.

“If they’re in a jail setting, they can’t leave, so they’re more likely to stay in the treatment,” she said.

Hunt said many different players in the criminal justice system might help identify defendants for the PSAP, including judges; state and local prosecutors; pretrial officers; and probation and parole officers.

According to information about PSAP from the Department of Corrections, once a judge and prosecutor agree that a defendant could enter the PSAP, an assessment of the defendant is conducted by one of the state’s substance abuse programs — one of which is in the Boyle County Detention Center.

If the assessment determines the defendant would be appropriate for the PSAP, then the defendant, judge, prosecutor and defense attorney all must agree to send the defendant into the PSAP for a minimum of six months.

Defendants are returned to their local jail when they graduate or if they fail to complete the program, Hunt said.

In 2019, a total of 212 clients graduated from the PSAP across the state, while 64 “were either terminated or withdrew for various reasons,” according to DOC spokesperson Lamb. Another 71 clients who began in the PSAP in 2019 are still in it this year.

Lamb said there is “absolutely” more space in the PSAP for counties that want to begin using it.

“The Department of Corrections will continue to provide education to any jurisdiction that expresses interest in implementing PSAP,” she said.

Local prosecutors raised questions about how the PSAP could work here during a presentation about the program at a Criminal Justice Coordinating Council meeting earlier this month.

Mercer County Attorney Ted Dean pointed out there is a presumption of probation and release for many defendants, meaning they would have to agree to remain in jail when they could be out — something he said he has a hard time believing many people would agree to.

Commonwealth’s Attorney Richie Bottoms said the local circuit court is “now more receptive to bonds” that allow defendants out of jail pretrial, meaning many more can now afford their bonds.

“I see potential resistance from people who would rather just get out of jail,” Bottoms said.

Roger Fox with the Shepherd’s House program said as someone who has dealt with his own drug problems, he’s been in the shoes of the defendants Bottoms and Dean talked about, and knows how they think.

Boyle County Attorney Chris Herron said he wouldn’t want use of the PSAP to affect his grant-funded “rocket docket” program, which speeds up the time from arrest to sentencing for some defendants.

Wofford said the PSAP has been available and remains available simply as an option — it doesn’t have to be used and doesn’t have to get in the way of any other programs or initiatives that are already helping address the problem.

“But if you find someone who’s been back multiple times over the years, there’s a pattern here to correct — this could be a better option,” Wofford said. “I just think it gives you all more options.”