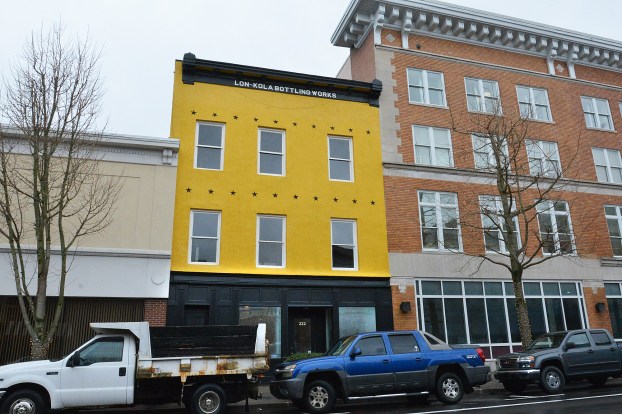 The building located at 222 W. Main St., is nearly finished being renovated by owner Tim Montgomery. (Photo by Robin Hart)

A lawsuit filed against the City of Danville more than five years ago by a local downtown property investor went to trial on Wednesday. But since the judge declared a mistrial because of a hung jury, the case will have to go back to court again in the spring.

The case in question stems from 2013, when Tim Montgomery purchased the long-time vacant historic building located at 222 W. Main Street, with the intention of restoring the exterior and all three interior floors and leasing the property to renters, according to the complaint filed in June of 2014.

The lawsuit states that the City of Danville and KU designed electrical lines to be buried during the construction of the city parking garage in 2007. KU ran lines underground and hooked them up to a station under the Whitaker Bank building at 218 W. Main St. (now occupied by Kentucky Trust), which supplied electricity to that building and to 222 W. Main St.

However, the city and KU ran the line without obtaining an easement.

According to the complaint, “Whitaker Bank unilaterally made the decision to cut the electrical line from its building to the building (now) owned by Timothy Montgomery,” who purchased it in 2013.

The complaint states that because of the city’s, KU’s and the bank’s negligence, the plaintiff “has incurred damages in the form of diminution in the value of his property, lost rents and income.”

In another brief filed by Montgomery on Jan. 15, he states that when he “found out that he did not have electricity, he began working with KU, the city of Danville, and Kentucky Trust (former Whitaker Bank) to obtain an easement. This litigation ensued. Ultimately, Plaintiff was able to secure an easement with Kentucky Trust in April of 2018.”

It goes on to read, “The issue before the court is what damages were sustained by the plaintiff as a result of not having electricity to his building from 2013 until April of 2018.”

According to the jury’s first instruction, it was to determine if “the City of Danville failed to exercise ordinary care when it caused the electrical lines to be buried in 2007” and if that failure caused Montgomery to lose rental income.

At least nine jurors had to agree on the decision of the claim. However, after several hours of deliberations with no agreement, the judge declared a mistrial. The case will be heard May 18-20.

222 W. Main St. was once known as the Lon-Kola Building and was constructed in about 1911, according to a Danville Architectural Heritage Board administrative review written by Danville Historic Preservation Coordinator Joni House in 2019. It’s also listed on the National Register of Historic Places in the city’s commercial district.

Michael Sheene, 56, of Danville, has been indicted for the murder of Lawrence Jamison, who died four months after Sheene... read more