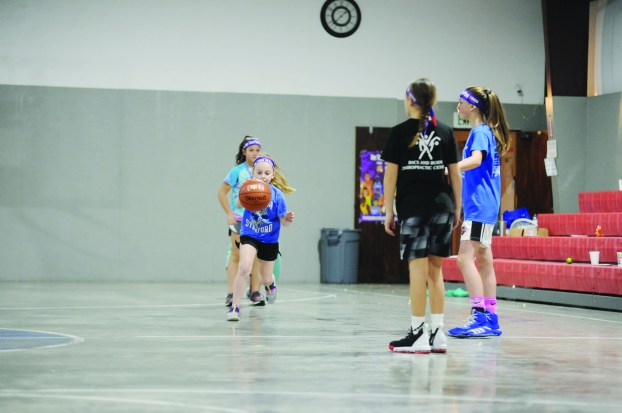 Allie Baker weaves through her teammates in a ball handling drill during a Her Time to Play practice. (Photo Derek Brightwell)

When Cliff and Sarah Berry’s NuBreed Academy partnered with the Jr.NBA, one of the programs that they were most excited about was the Her Time to Play initiative which is designed to introduce the game of basketball to girls at a young age.

As the first year of the free program winds down, Sarah thinks that it’s been a success so far.

“What we hear from their parents is that this is the best thing they’ve had for them,” she said. “A lot of them, their confidence has gone up because of it — we talk a lot about self-confidence and other issues.”

Despite limited notice, Berry says that she had around 50 girls — ages 7-14 — sign up for the program’s inaugural year which made her a little nervous because she wasn’t sure they would be able to handle that many. But after year one, she’s already thinking of ways to increase the number for next year.

“When we do it next year, I’ll probably do it on the weekends just so more girls can show up,” she said. “There’s a lot going on during the week and a lot of the girls that signed up for it play up in high school so they’re playing on these nights. A lot of the ones who wanted to come couldn’t.”

Currently, they meet at the NuBreed Academy facility in Junction City on Monday nights at 6:00 p.m.

What the Berrys have wanted to accomplish with NuBreed is to expand the game of basketball in Boyle and the surrounding counties. The Her Time to Play program helps do that for girls basketball.

In the first year, they’ve seen a mix of girls from the Boyle and Danville school systems as well as Casey County and “a majority” from Lincoln County. Berry believes that the development from a young age greatly contributes to Lincoln County High School’s successful programs.

“A lot of those kids trained with us anyway,” she said about Lincoln County girls. “I’d say a majority of them are Lincoln and you can tell because they start at a young age and that’s why their programs are so successful — boys and girls.”

In addition to teaching the girls the game of basketball and improving their self-confidence, the Her Time to Play program also has built a community among girls who already have gotten to know each other as opponents on the court.

“When one of them has to miss, the other girls will be like ‘Oh I wish she was here.’ So it’s developing a sisterhood among them, too,” Berry said. “A lot of them already knew each other but now they’re connecting. They’ve played against each other so now they’re kind of seeing the person behind the basketball player.”

Besides growing the game for young girls, the initiative is also a push to increase the number of women coaches in the game of basketball. That directly impacted Sarah Berry who said that she wasn’t sure she had what it took to be a coach before this.

“I’ve gained more confidence in myself. I didn’t feel like — my husband knows everything about basketball and he’d always encourage me and tell me I could coach,” she said. “I don’t know that I felt I can but I feel more comfortable now and I think that’s the goal for the coaches in this.”

Berry is joined by Shelby Smith and Beth Boyle as the overseers of the program. Just like the group of girls they coach, the three represent different counties in the area. Boyle is the parks and rec director of Lincoln County and Smith coaches Garrard County Middle School’s girls team. The three of them volunteer their time for the free program “because it’s in the best interest of the kids in the area.”

‘Team effort’ required for Ads in All A second round

After Wednesday’s win over Collegiate set up a second round match against Glasgow, Danville coach Judie Mason immediately requested some... read more