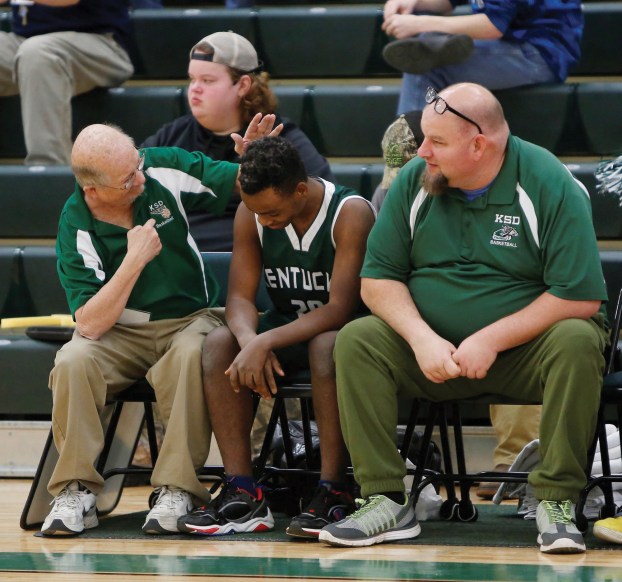 A trip to the Mason-Dixon Tournament is a one of the highlights of the season for basketball players at Kentucky School for the Deaf, but this year the party is at their house.

KSD has rolled out the green carpet for about 200 players, cheerleaders, coaches and other visitors who have come to the Danville campus for 68th annual boys basketball championship of the Mason-Dixon Schools for the Deaf Athletic Association.

Nine teams from schools for the deaf across the South are competing in the tournament, which is being played at KSD for the first time since 2009.

KSD’s young team was the first team to be eliminated from championship contention, as the Colonels lost 65-20 to South Carolina School for the Deaf and Blind in the opening game Thursday at Thomas Hall.

But while the competition is important, the tournament might have even greater value as an event in which participants can immerse themselves in deaf culture.

“It’s a great experience for our kids. They have the opportunity to meet a ton of deaf kids from other states – kids like them – and make friends,” KSD coach Mike Yance said through an interpreter.

Yance knows what he’s talking about. He has been involved with the Mason-Dixon Tournament for some 25 years, having experienced it as a player at Virginia School for the Deaf and Blind and as a coach at North Carolina School for the Deaf before coming to KSD, where he is in his 13th season as the Colonels’ coach.

“I really just fell in love with that experience, being able to play in the tournament, getting to meet other deaf friends, and now our kids get that opportunity,” he said. “Going from a player to a coach, it’s always good to see the kids have that same opportunity that I had. It’s good for them to make friends and to be able to socialize with other kids.”

The four-day event kicked off Wednesday night with an opening ceremony, and it culminates with the championship game Saturday night. In between there are 13 games, a free-throw and 3-point shooting competition, a cheerleading competition and nightly social activities.

“It’s not just a basketball game, it’s a cultural event,” KSD principal Toyah Robey said. “These events, these are some of the only times that our kids all get to be together in one location.”

Much of KSD’s basketball schedule consists of games against schools with hearing students, but Yance said communicating with other players and coaches – and even the officials – is easier at the Mason-Dixon.

“So often we play against public schools with hearing students, so it’s a great opportunity to use the same mode of communication. And we have deaf refs, so it’s easy communication with them as well,” he said.

KSD has won two Mason-Dixon titles – in 1985 and 1988 – and has finished second five times. The most recent runner-up finish was at home in 2009, Yance’s second season as coach.

“I thought I wouldn’t be coaching (when we hosted again), and here I am,” he said.

On Thursday, a KSD team that started two freshmen, a sophomore and two seniors was no match for South Carolina. John Collins scored 10 points and Micah Tucker scored four for the Colonels, who trailed 30-11 at halftime before their scoring picked up in the second half.

“Alabama’s coach came up to me and said that he was surprised, that they had made improvements since we played in the Arkansas classic (two weeks earlier),” Yance said. “I’ll tell the team that later, I haven’t gotten a chance to tell them, but they are making strides slowly but surely.

“I told them don’t worry about the losses, the important thing is that they’re getting better. You played hard, you put in our best effort, and if you’ve got an open shot, shoot it. In the second half, they started putting in more buckets. The mistakes are fine, play through your mistakes.”

KSD (0-8) is led by its two seniors: Collins, who entered the tourney as the team’s top scorer at 9.6 points per game, and Jordan Dorn, the top rebounder at 4.3 boards per game.

“John has tried his best, he’s played really hard. Even compared to a year ago over the course of the time he’s been here at KSD he’s made a lot of improvement. And he has always been about what’s the best for the team,” Yance said. “Jordan is definitely one of my quietest players. He’s not quite as aggressive or very vocal on the court … but he’s been very patient for a long time to get his time on the court, and he’s a good kid.”

Yance will be recognized for his leadership during Saturday’s awards ceremony. He will receive a distinguished service award from the conference.

Yance and his players are missing out on a road trip this week, but that’s just fine with the coach.

Robey said it’s an honor for KSD to host the tournament, though it requires months of planning and long hours of work by staff members and volunteers this week.

“We’re very excited and honored to host it. Our staff’s been working really hard to make sure everything is ready,” she said. “It’s a big event, I’m so proud of our staff, everybody’s really come together (with attention to) detail, and our focus is hospitality.”

KSD played North Carolina in the consolation round Friday afternoon at 3:30 p.m.

Alyssa Wray finds her voice on the stage

When you see Boyle County senior Alyssa Wray on the basketball court, there’s no question that she belongs there. Standing... read more