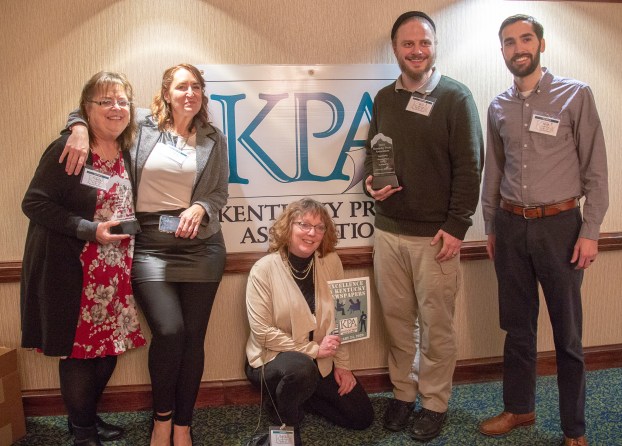 The Advocate-Messenger has been named the second-best mid-sized daily newspaper in the state by the Kentucky Press Association.

The paper’s staff received the award Friday at the annual KPA awards banquet, held at the Hilton in downtown Lexington.

The Advocate-Messenger came in second to The State Journal in Frankfort in the overall general excellence category. The Commonwealth Journal in Somerset placed third in the division.

“As one of the smaller dailies in the mid-sized division, I think placing among the top three in the state speaks to how hard the Advocate’s staff works to cover everything — and cover it well — in Danville and Boyle County,” Editor Ben Kleppinger said. “This award was truly a team effort and we wouldn’t have earned it without each and every person who contributed in our newsroom for the past year.”

Among the paper’s 12 individual awards were a pair of first-place honors. One was for coverage of the fatal pipeline explosion that rocked the Moreland community near the Boyle-Lincoln county line on Aug. 1. 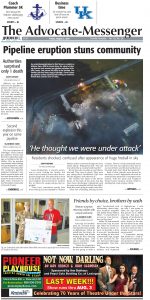 The front page of The Advocate-Messenger from Aug. 2, 2019, featured multiple stories about a pipeline explosion the day before. The coverage earned reporters Robin Hart and Bobbie Curd a first-place award for Best Breaking News Coverage from the Kentucky Press Association. (Advocate-Messenger archives)

Reporters Bobbie Curd and Robin Hart won first place in the Best Breaking News Coverage category for the numerous stories they wrote the day of the explosion, detailing everything from the moments after the explosion and what was being done to assist victims to how authorities reacted and what the next steps in an investigation would be.

“Very thorough coverage of the tragedy,” the judges wrote. “No question that the amount of work done on this story earned its top placement.”

Hart, Curd and Nancy Leedy, editor of the Advocate’s sister publication The Interior Journal, also won second place in the Best On-Going/Extended Coverage Story category for their numerous reports on the fallout from the pipeline explosion over the following months.

“This series beautifully captures the damage the explosion did to individuals and the community,” the judges wrote. “The stress that the displacement of families whose homes were destroyed or damaged placed on area service organizations was excellently portrayed, as was the reaction of officials at the company that owned the pipeline.”

Former Advocate-Messenger Sports Editor Matt Overing claimed the paper’s other first-place honor in the Best Sports Feature Story category. Overing won for his feature in late November 2018 on Chuck Smith and his son, Brandon Smith, who were both coaching undefeated high-school football teams into the playoffs that year.

The judges were impressed by the Smiths’ achievements and wrote that Overing’s feature was a “great tribute to their ability to coach high-school kids and do a remarkable job at it.”

Other awards earned by The Advocate-Messenger were: