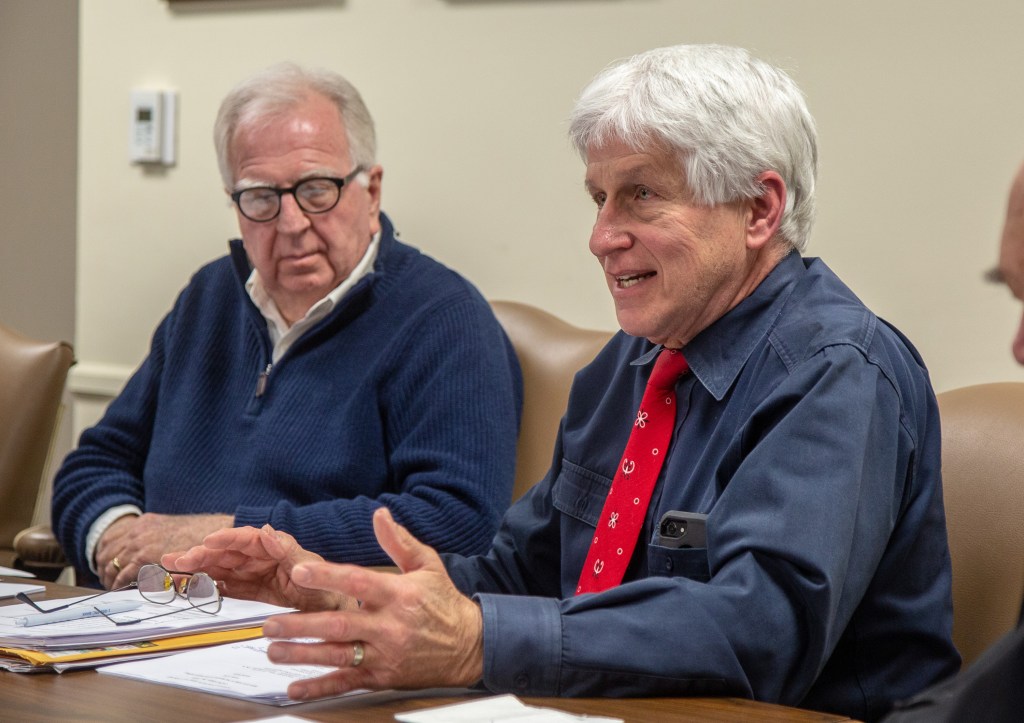 Boyle County Magistrate Tom Ellis talks about his plan to ask the state attorney general to intervene and force a change in water and sewer rates for Perryville and Junction City during Tuesday's fiscal court meeting. (Photo by Ben Kleppinger)

Some Boyle County magistrates say they plan to seek help from the Kentucky Attorney General’s Office in their fight to force Danville to lower utility rates for water and sewer customers in the outlying areas of Boyle County.

Magistrate Tom Ellis said he is leading the effort; Magistrate Jason Cullen is participating and Magistrate Ronnie Short may, as well.

Cullen and Ellis said Tuesday they don’t think Danville is treating residents in Perryville and Junction City fairly because water/sewer bills in those cities are far more expensive than the bills for customers in Danville.

Cullen said at a recent “Pulse of the People” public forum in Ellis’ District One, one local resident said his water bill is around $300 a month, of which around $60 is for water and “about triple that is for sewer.”

“His question is, if I’ve got water coming in, how is it coming out three times as heavy or more?” Cullen said. “That’s a little head-scratcher there. But Luckily Magistrate Ellis is still on the hunt for this.”

A $60 water bill in Perryville therefore represents usage of around 1,300 cubic feet of water in a month; the sewer bill for the same amount of water would be in the vicinity of $150.

Cullen said based on what he learned when he attended Monday night’s Danville City Commission meeting, water and sewer bills are “a main source of revenue for Danville.”

“On top of that, they spent over $100,000 on a new fountain for our square here last night,” Cullen added, referencing the city commission’s discussion Monday of a potential upgrade to the fountain in Weisiger Park. “So they’ve got extra revenue, it seems.”

“It’s actually a bit more lenient, tenichally, with the water fund — if we wanted to spend something on conservation, or something like that. But we don’t, we never do, and we wouldn’t” spend water funds on the fountain, said Michele Gosser, Danville’s chief financial officer, Tuesday afternoon. “We only use it for water systems.”

Ellis asked Cullen to state again how a significant portion of Danville’s revenue comes from its water and sewer bills, in order to emphasize the magistrates’ point, but Cullen declined.

“Would you repeat what you said about the disproportionate … ?” Ellis asked.

“That’s fine,” Cullen said. “… I appreciate Rick (Serres) and the commissioners out there but their idea of budgeting is very different.”

Ellis said he believes the current water and sewer rates are a barrier to economic development in the areas of Boyle County outside of Danville. He said the state AG’s office has a Rate Intervention Division, which “can intervene on lights, water and sewer if there are exorbitant rates.”

That division is where Ellis said he plans on taking his complaints about the water rates, along with evidence in the form of photos of constituents’ water and sewer bills.

Perryville water customers first began to complain in large numbers about their water and sewer bills after a significant rate increase went into effect in December 2017.

Ellis speculated Tuesday that Danville officials “might have thought we moth-balled” opposition to the increases, “but it’s coming out” again.

Magistrate Phil Sammons said he wished the other magistrates luck in their endeavor, but he specifically remembers how the rate increases were tied at the time they were made to repairs and improvements to the water and sewer systems for outlying areas such as Perryville.

“Don’t get me wrong — I’m for you,” Sammons said. “But I don’t think there’s a whole lot you can do with the way it’s setup, because this has got to be paid for. Somebody has got to pay for it.”

Ellis said he feels the lack of “parity” between rates for Danville customers and rates for Perryville and Junction City is egregious enough on its face that it shouldn’t be allowed.

“It’s a level of parity that we would hope to achieve to gain some fairness vs. what is absolutely paralyzing our two communities,” he said.

Judge-Executive Howard Hunt tried to wrap the discussion up.

“I have a lot of empathy for this situation and the people who are suffering from this, but this is not the place to debate whether or not it has value going forward.”

Sammons said he also gets calls from people outside his Danville district who are complaining that they can’t pay for medicine they need because of how high their water and sewer bills are.

“Thank you for mentioning that,” Ellis said.

Perryville residents have been voicing displeasure with their water and sewer bills with some frequency ever since the 2017 increase. In June 2019, Danville utilities engineer Earl Coffey told Perryville City Council members high sewer bills there are a result of rising costs to operate Perryville’s sewer plant and having a relatively small number of customers on Perryville’s sewer system.

After installing pumps and aerators to meet state regulations and maintain the sewer plant’s permit, electricity costs jumped to more than $52,000 annually, Coffey told council members at the time. In all, there have been more than $70,000 in additional annual costs to keep Perryville’s sewer plant operating, and those costs can only be spread over Perryville’s approximately 450 customers — the only ones who use that sewer plant, Coffey said at the time.