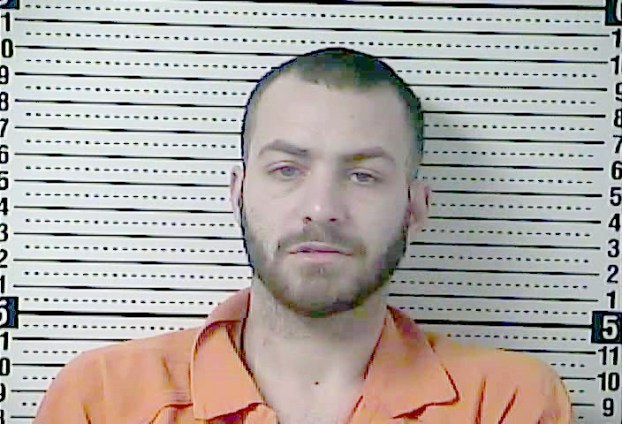 Boyle County deputies arrested a man late Sunday night who allegedly led a two-county police pursuit that at one time exceeded 100 miles per hour, while keeping a passenger in the vehicle against her will.

After the pursuit that began in Junction City ended in the driveway of a Hustonville home, Dustin Stephens, 30, was charged with first-degree fleeing or evading police in a motor vehicle, first-degree wanton endangerment, first-degree unlawful imprisonment, speeding more than 25 MPH over the limit, tampering with physical evidence, second-degree possession of a controlled substance, reckless driving and disregarding a stop sign, according to the sheriff’s office.

On Sunday, the Boyle County Sheriff’s Office had been put on on the lookout for a blue Chevy Impala from Mercer County, which was thought to be connected to a theft investigation in Harrodsburg, according to the sheriff’s office.

Boyle County Deputy T.J. Wren spotted a vehicle matching the Mercer County description traveling south on U.S. 127 in Junction City at 76 miles per hour, according to a news release.

The pursuit eventually wound up back on U.S. 127 South, at which point the fleeing vehicle reached speeds “in excess of 100 MPH … before turning onto Houston Point W in Hustonville,” according to the release. “The pursuit finally came to an end in a driveway on Holtzclaw Lane in Hustonville, where deputies Cloud and Abbott caught up. After a brief scuffle and a Taser deployment, the driver, identified as Dustin Stephens, was arrested.”

A passenger who had been in the vehicle during the pursuit told deputies she had attempted to get out multiple times but Stephens wouldn’t let her. Deputies also locate some of the reportedly stolen items from the Harrodsburg theft case, according to the release.

Stephens is listed as a Russell County resident by the Boyle County Detention Center. He was booked into the jail shortly after midnight on Monday; he was being held on a $20,000 cash bond Tuesday morning.

The Advocate-Messenger has been named the second-best mid-sized daily newspaper in the state by the Kentucky Press Association. The paper’s... read more