Mason, McCulley root for each other every game but two 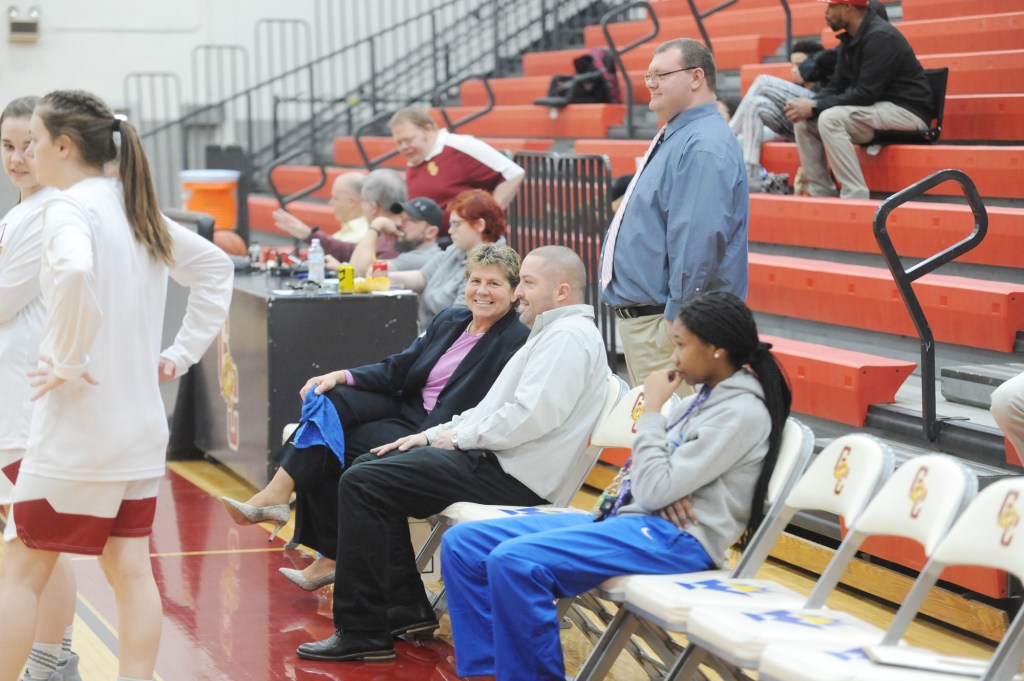 Judie Mason and Jimmie McCulley share a moment on the Danville bench before their teams faced off Monday night. (Photo Derek Brightwell)

Ten games into his first year as Garrard County’s girls basketball head coach, he had already matched the team’s win total the year before.

But perhaps the most special game he had on his calendar for his first year was Monday night’s meeting with district rival Danville.

Because it was the first time he would face off against his mentor — Danville coach Judie Mason.

“She’s taught me everything I know. I hope to be as successful as she is,” an emotional McCulley said after the game.

“He’s one of my good friends,” Mason said about the coach she’s worked with since he was a student teacher for her at Boyle County. “He’s a lot of the reason we’re as good as we are because he and coach (Brian) Huffman have been with me since the first day I took over at Danville. They helped me build the program.”

McCulley coached with Mason for nine years — including the 2014 team that reached the Sweet 16 in the State Tournament.

Mason knows that a good team is built on good assistants and wants all of hers to reach the same level McCulley has.

“I tell my assistant coaches — I want them to be head coaches. I think I’ve got one of the best assistant coaches in the state right here in Tryston Ford. He’s played at the college level,” she said about her current assistant coach. “I’m only as good as my assistant coaches and I’m so proud of Jimmie because when I took over at Danville it was a struggle. I mean, they won three or four games the year before. We had to start from the bottom at the middle school. He’ll do the same here. I respect him a whole lot. He’ll do it the right way here.”

McCulley was equally as ready to praise his former head coach and still mentor and is modelling his current team after that mold.

“That’s what we’re building towards. She’s one of the best coaches in the state,” he said. “I’m not just saying that because I worked for her. I wouldn’t be in this position if it weren’t for her.”

Before the game — while the teams were warming up — McCulley was sitting in a familiar spot: on Danville’s bench next to Mason. The pair were laughing and catching up.

“We just talk about games that we’ve previously played. We talked about the All A and how I thought she had a good chance to win that,” McCulley said.

He also said that they talk almost every day and before every game, she wishes him good luck. Every game, except for when they play each other, of course.

“She sent me a text today saying ‘I can’t wish you good luck, but I’ll see you tonight.’ So I sent back the same thing,” he said.

Mason is still teaching McCulley. He said that he’ll bounce ideas off of her about upcoming opponents and that she’ll always give him her “honest opinion.”

“That’s the kind of relationship we have,” McCulley said. “She knows that I will go to battle for her any day of the week. She knows I will fight someone for her and I think she would as well.”

It’s easy to see the respect that both coaches have for one another, and how close they grew over the years. After a game where Mason’s Admirals ran away with a win over the Golden Lions, McCulley saw it only as a challenge for his team to reach the same level as hers. And he’ll be her biggest fan. Well…

“Other than two games a year — and you see me get emotional because I wouldn’t be in this position if it wasn’t for her,” McCulley said. “I love her to death, I do.”