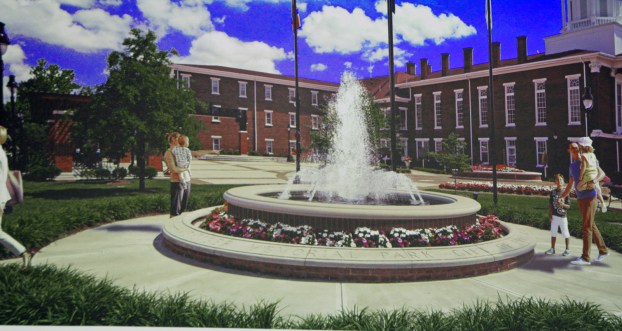 A rendering by Brandstetter Carroll shows what the firm says the upgraded design to the Weisiger Park fountain will provide in effects. The firm provided a free-of-charge redesign of the fountain, due to its "underwhelming" performance, but now the city will need to pay for the work required to achieve it, which could cost upwards of $100,000.

Architectural firm Brandstetter Carroll came through on its promised redesign of the Weisiger Park fountain for the City of Danville. Now, it’s up to the city to pay the bill if it wants the improved fountain — a bill that could cost $100,000 or more, as a rough estimate.

One woman questioned city commissioners Monday night about spending so much on a fountain upgrade, when she sees so many people who don’t know where their next meal is coming from.

Monica Sumner with Brandstetter Carroll presented the fountain rendering to Danville City Commission Monday night, which showed a much larger bowl and a taller water spray, including controlled lights, which could be changed for events.

The city approached the firm to provide a better design, after former City Manager Ron Scott said a group of 15 residents had signed a petition and raised money toward the effort of replacing the current fountain with a bronze, swan-head fountain currently in Lexington.

The commission let Brandstetter Carroll, which designed the current fountain, know about its dissatisfaction with the “underwhelming” effects of the fountain. The firm, which has completed many projects in Danville, agreed to provide a new, improved design free of charge. 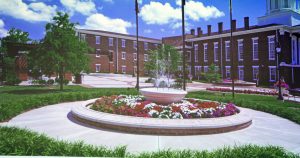 Brandstetter Carroll showed a slide of what the Weisiger Park fountain looks like currently.

Sumner went through a quick slide presentation, showing the current effects of the fountain compared to the new design. The upgrade will include removing the bowl and installing a larger one that’s 12 feet in diameter. It will require a “pit” installed in the grassy area to the left, similar to the water curtain fountain, where the controls of the lights and pumps will be located.

She said dirt can be excavated for the larger ring to be inserted, which will match the other designs in the park. Sumner said there will be less room for planting, “however there is a small band that can remain” for flowers. The top of the water flume will be about seven and a half feet tall, and surrounded by some smaller jets. A short video was shown explaining “how the water will animate.”

“So that’s a thumbs up, then?” Sumner asked.

Mayor Mike Perros said he was “pleased to hear” about the illumination plan, which Sumner said is “really necessary, especially for night.”

Commissioner J.H. Atkins, who seemed a bit hesitant about the move, asked about the installation timeframe.

“We’re going to begin working on that with Mr. Coffey,” Sumner said, referring to City Municipal Engineer Earl Coffey. She said she believed the plan was still for Coffey to have “city forces to do the work, which is totally possible.”

Atkins asked if this meant there are savings in having staff do the work.

Essentially, Sumner said, the city would be purchasing “sort of plug-and-play” equipment, which the city’s Public Works Department can install.

Commissioner Rick Serres verified that the controls will be underground, “so we won’t have to try and hide those things.” He said he appreciated the hard work the firm has put into the redesign.

The fountain was part of the main features in the newly renovated park in 2017. The park renovation cost $594,000, according to an official announcement when the park was dedicated.

Perros wanted “a bit of a hard date” about when the fountain will be fixed.

Coffey said the first step for staff will be “confirming that you all support this approach … Probably give it a couple of weeks to air … do some background research and probably place it on the agenda for the next commission meeting.” He said he will get with City Engineer John Cassel and Public Works Director Rick Henry to shore up some details and numbers.

Coffey said staff has confidence they can put it in, but the city will have to contract with an electrician and a plumber to do some finetuning.

The equipment will take about eight weeks to come in, Sumner said.

“I personally would like to see it done and cleaned up by Brass Band,” Perros said.

City Commissioner Kevin Caudill asked Coffey what staff needed from the commission, as far as a motion, or if the presentation was just general information.

“It depends on how comfortable you are. We believe that the pump will cost in the neighborhood of … $40,000. Logically we believe with self-performing the demolition, and buying some additional materials, like concrete, you’re going to end up somewhere with an additional $40,000 and change, don’t have a precise estimate,” Coffey said.

Tuesday, Coffey said staff would be seeking competitive pricing for the pump.

“We’d have to bring that back to the commission for approval, that will be the first step … Then we have to build the concrete and the circle.”

Coffey told the commission if it would like to authorize them to begin immediately, they can start a bid document. Perros decided the issue should be turned over to new City Manager David Milliron, “and let him work this problem through.”

Later in the meeting, Danville resident Melissa Norman approached the commission about the move. She introduced herself as a social work student who goes to Eastern Kentucky University, who was attending a meeting as a requirement in one of her classes. Norman said she felt it necessary to speak up about what she sees as a problem.

“As a social work student, I’m about social justice and helping others,” she said. “I understand the beautification of our city; I’m a home-improvement junky … But also, $100,000 at the very least, would make a huge difference on things like homelessness.”

Norman said she did part of her practicum at the Danville-Boyle County Housing Authority. “And they don’t just help people with homes; we would find resources for food, resources to help them pay their bills. It’s a nice thing to walk down Main Street, but you go anywhere else” in the city, like housing units or lower income areas, she said, “and there’s people struggling every day and they don’t know where their next meal is coming from. That’s the only issue I have with that.”

Some Boyle County magistrates say they plan to seek help from the Kentucky Attorney General’s Office in their fight to... read more