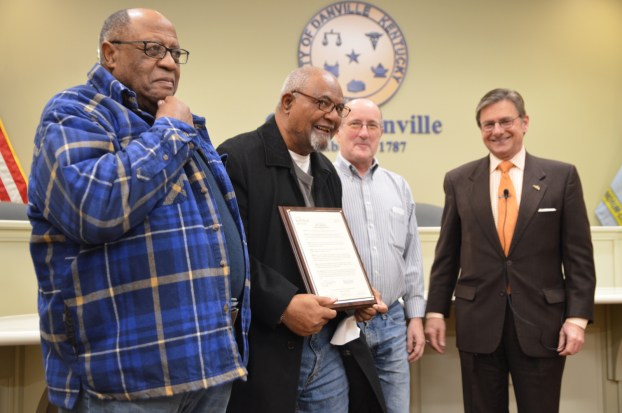 Three men accepted a proclamation from the City of Danville that designates the month of February as Black History Month. James Hunn, Charles Gray and Mike Dennis were given a round of applause Monday night at the city commission meeting after Mayor Mike Perros presented it to them.

The 2020 theme of Black History Month, as set by the Association for the Study of African American Life and History (ASALH), is “African Americans and the Vote.”

“The theme speaks … to the ongoing struggle on the part of both black men and black women for the right to vote,” according to ASALH.

Danville’s proclamation speaks to how, even before the Civil War, black men petitioned their legislatures and Congress in order to be recognized.

It also points to the work of black suffragists, not only within the larger women’s movement, but within the larger black voting rights movement. “Through voting-rights campaigns and legal suits from the turn of the 20th century to the mid-1960s, African Americans made their voices heard as to the importance of the vote,” the proclamation reads.

The proclamation states that “the theme of the vote should also include the rise of black elected and appointed officials at the local and national levels, campaigns for equal rights legislation, as well as the role of blacks in traditional and alternative political parties.”

After Perros read the proclamation, he handed the plaque to Hunn, who said, “I’m glad you all got that done before February.” Hunn has been vocal resident in the past about the commission being late to issue proclamations to celebrate Black History Month.

In other business, the commission unanimously approved: