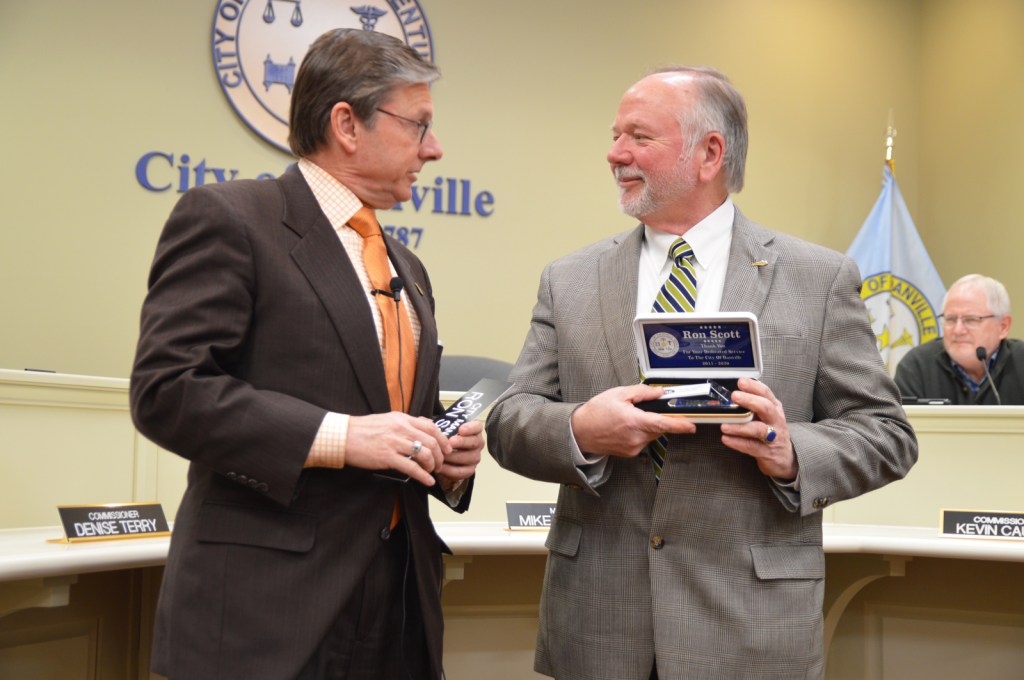 Retiring City Manager Ron Scott accepts his name plate and personlized knife Mayor Mike Perros presented him with Monday night as he was honored for his nine years of service to the city. (Bobbie Curd photo)

As Ron Scott was honored Monday night by Danville City Commission, many made reference to the “choppy waters” he took on as city manager, when he came on nine years ago, with one commissioner referring to it as “juggling chainsaws.” Scott is retiring after nine years with the city; his last day is Friday.

Mayor Mike Perros presented Scott with the customary, personalized collector’s knife at the front of the city hall public meeting room, as well as with his name plate that would sit before him during meetings.

“I mean, what do you say here?” Perros began, standing beside Scott. He said that to say Scott has been a “fantastic city manager is obviously an understatement.”

“To say Ron has been dedicated and given tremendous energy to the successful performance of his job is an understatement,” Perros continued, adding that Scott has always been an advisor to him and the four commissioners.

“Sir, this city owes you a tremendous amount of gratitude, because at the time you came in, the waters were choppy. And you calmed the waters very well, and that has not been an easy thing,” Perros said. “As a sailor yourself, when the water’s choppy, you wind up getting a little wet yourself. You’re in calm seas now, and I personally wish you nothing but the best, and I know the rest of the people here with me feel the same way.”

Scott was given a standing ovation, and began to head over to the podium to speak, but was stopped by Commissioner Denise Terry, who said the commission had a gift for him.

As Scott asked what it was, Perros jokingly said, “It’s a clock, Ron …”

Perros informed the crowd, “In case you all didn’t know, Ron is an expert in fixing clocks. So he’s got about 77 clocks laying around the house.”

Scott unveiled a custom-made lamp, which Terry explained her father makes from old telephone insulators. The lamp gifted to Scott was made with wood from “all different kinds of wood from your farms. Ron’s wife, Janice, had garbage cans full of insulators from telephone poles … those are two … insulators from your barn, as well,” she said about the custom-built lamp.

Terry wanted to say a few words about the retiring city manager.

“Ron and I didn’t get to spend a lot of one-on-one time together for probably a couple of months. We actually had a spontaneous lunch one day, very last minute. After lunch, I thought, ‘I think this guy’s going to be OK.’”

She said, “Like the mayor said, the waters run a little choppy, and you’ve helped us to ride the ship and kept us on a steady path. I appreciate everything you’ve done.”

Commissioner Kevin Caudill also commented on how difficult things were when Scott came on board almost a decade ago. “As people have mentioned, you came in under some difficult circumstances, and managed to juggle those chainsaws very well and got us headed in the right direction and kept us that way, and kept us out of trouble.”

Caudill said, “Money’s been in short supply, you’ve seen us through that, thus far. Now it’s up to

Dave to take that task,” referring to new City Manager David Milliron. “We appreciate everything you’ve done, the friend you’ve been and the team spirit we’ve got to enjoy since you’ve been here.”

Commissioner J.H. Atkins said, “I just want to say thanks,” and handed the mic to City Attorney Stephen Dexter.

Dexter said Scott’s time at the city has been “nothing short of exemplary,” and that he has shown the “fortitude of an assertive leader.” Continuing with the sailing metaphors, he offered that Scott has “always chartered your voyage by the stars, and not by the waters or the choppiness around you — and that is to be commended — and not listen to noise, but to pursue the excellence you’ve achieved here.”

Dexter offered a “very impressive punch list” of items completed during Scott’s tenure. “A cable franchise that was decades’ old, negotiated. A revamp of 911 services that will serve this community for decades. A reorganization of parks and recreation that will be transformative. And a series of clean audits and financial stability that this city has not experienced in decades. That is all under your leadership; we are humbly thankful for that. … You’re a gentleman and a scholar, as I’ve always said, and I appreciate your time.”

Scott became emotional as he delivered some of his parting comments, but began with a laugh. “After that build-up, I should just go sit down.” He said it has been a joy to work with the city employees and commission.

“You know, the tone is set at the top. The top is really the commission and the city manager, but the work gets done by the city employees.” Scott said the city is “blessed to have this community of very dedicated employees that go above and beyond the call in doing the work for all of us who live in the community.”

He said public service is a great calling, and he hopes younger generations will discover that.

“I say that because I started at it 45 years ago; I actually have 35 in local government, and it’s been a great experience,” Scott said, getting a little choked up.

He said even though it sometimes takes a long time in government to achieve something, those achievements can only happen with the cooperation of the city commission and staff. “The manager is but a cheerleader, or a focal-point, between the staff and city commission. It requires a great deal of cooperation, coordination and discussion …”

Scott said he is grateful to have had the experience he has with the city.

“Janice and I aren’t going anywhere. You’ll see us about town. Who knows. I might serve on a voluntary committee … I look forward to seeing each and all of you as we go forward together.”

A retirement reception will be held for Ron Scott 5-6:30 p.m. tonight (Thursday, Jan. 30) at the Art Center of the Bluegrass, 401 W. Main St., Danville. Refreshments will be on-hand, and the public is welcome. Retiring Danville Fire Chief Ken Pflug will also be honored.