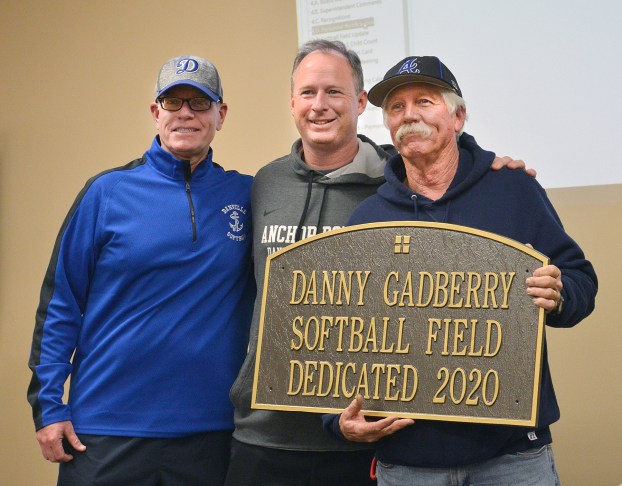 Danville's softball Coach Tim Breitenbach and baseball Coach Paul Morris stand next to Danny Gadberry who had just been told that the new softball field was named in his honor Monday night at the regular meeting of the Danville Board of Education. (Photo by Robin Hart)

Leading up to the announcement, Director of Facilities Christy Denny told the board that the maintenance and grounds crews “go above and beyond” their regular duties in and around the schools’ buildings. Denny said “because of these guys” the district has been able to save money on many projects, including the construction of the softball field.

“They put the foul poles up. Put up the scoreboard.” And a few weeks ago, they were in a 4-foot-deep ditch fixing a plumbing black flow problem, in the rain, Denny said. 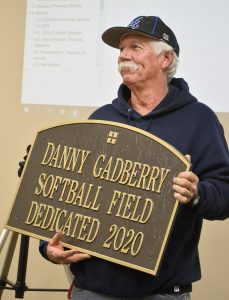 Danny Gadberry, Danville maintenance and grounds crew technician, hold the plaque which shows the name of Danville’s new softball field. Gadberry learned that the field was named in his honor during the regular board of education meeting Monday night. (Photo by Robin Hart)

Gadberry is a building and grounds maintenance technician and is “the king of all groundskeeping, in the state, possibly nation, world,” Denny said laughing. Gadberry not only did the softball field’s seeding and fertilizing, he saw the need for and built a brick dust track in the dugout and an area for practice pitching. “And he picked up 10,000 rocks, every day, from the infield.”

Gadberry also built customized dugout benches for the home team that he had seen in another district. “You should see what he built. … They’re amazing,” Denny said.

During the construction project, Gadberry “basically kept the whole construction crew in line,” and he fixed things before the contractors had a chance to as they finished up, Denny said.

When making the announcement, Denny told Gadberry, “This is your life.”

He is a 1971 Danville High School grad and began working at Danville schools in 1991. In 2002, he received the Kentucky School for the Deaf Distinguished Service Award for work on their fields; in 2007, “Danville schools dubbed him The Ultimate Groundskeeper,” Denny said.

In 2009, Gadberry was given the Allen Burns Memorial First Mate award; in 2015, he was inducted into the Danville Athletic Hall of Fame; and in 2020, he “received the honor of having the softball field named Danny Gadberry Softball Field.”

Danville Athletic Director Lisa Fisher said she has worked with Gadberry for more than 20 years. “He is an Admiral. He stands for all that we want our athletes to stand for. He is the root of all of success as Admirals.”

“Danny, thank you for everything — for your loyalty, for your dedication, four your hard work, for always being an Admiral,” Fisher said.

Following an eruption of applause and a standing ovation, Fisher handed Gadberry the screws for the sign. “I’m going to give these to Danny because nobody else could put it up — but Danny can,” Fisher said.

Board chair Steve Becker said, “On behalf of the board, we are excited to have this complex named after you, and of course, all the work that you’ve done through the years has not been unnoticed. Congratulations.”

With a chuckle, he added, “We look forward to watching you put up your own sign.”

In another special presentation, Superintendent Dr. Tammy McDonald gave the district an original watercolor of the new Board of Education building that she recently painted.

She created her painting in the same style of A. Jack May’s watercolors of all of Danville’s school buildings that hang in the foyer at the Board of Education office, which is located next to Danville High School.

“I was so impressed with it. Thank you so much,” Becker said. 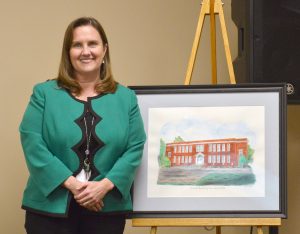 Danville Schools Superintendent stands next to the watercolor painting of the new Board of Education Building that she painted and donated to the district on Monday night.

“I’ve been here a year and a half and I cannot say enough about how the community and the teachers and the employees and the board — just the support that I’ve received,” McDonald said. “Not only just within the job, but just as a new citizen of Danville. So, I want to say thank you and this is my gift back to the district.”

Three men accepted a proclamation from the City of Danville that designates the month of February as Black History Month.... read more