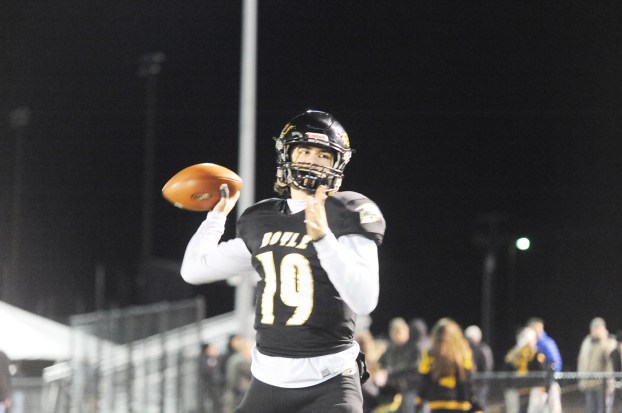 Lanter leaves Boyle as its most prolific passer. He'll stay in Danville for college and play for Centre. (Photo Derek Brightwell)

Reed Lanter had never been to a Centre College football game until last season and never would have believed one day he might go to Centre.

“But as time went by and I started to get around all of the coaches, all of the players and hang out at the facilities it was starting to get more and more obvious that it is the place for me,” said the Boyle County senior quarterback who decided last week he would play his college football with the Colonels.

Lanter had a lot of options from Division II, Division III and NAIA schools along with some preferred walk-on offers to Division I teams. He was even in contact with defending Division III national champion North Central College out of Chicago.

“My greatest strength on the field is that I win football games. Not many quarterbacks can say they have a better record than 41-3 as a starter,” Lanter said. “But having the best coaching staff in the state and having some pretty awesome teammates helps tremendously.”

He credited former Boyle coach Chuck Smith and former offensive coordinator Chris Pardue — who both resigned after the Rebels lost in the state title game in December — for preparing him for what lies ahead.

“They had a really high standard for my teammates and me. Our practices were sometimes more intense than the games on Fridays,” Lanter said. “I think that’s where the teams ‘calm, cool and collected’ persona came from.”

“I have gotten very close to both of them because they have recruited me for so long. My parents taught me to have priorities that I should base my life around — faith, family, friends, education and football in that order,” Lanter said.

“Both of those coaches have made it clear that those are their priorities, too. It’s great to know I have coaches that value the same things as I do.”

However, picking Centre was not just about football.

“Academics played a pretty big role in my decision. I enjoy the thought of being a successful/productive person in today’s society and I know that Centre College is the best option to set me up for that success in the future,” he said.

Still, he knows he’s leaving behind some special memories and teammates from his high school years.

“I will miss playing with and in front of my childhood best friends every Friday night,” Lanter said. “It’s a tough pill to swallow knowing it’s your last game playing with the people you grew up with. If I could, I’d do it all over again because there is truly no greater feeling than those Friday night lights.”