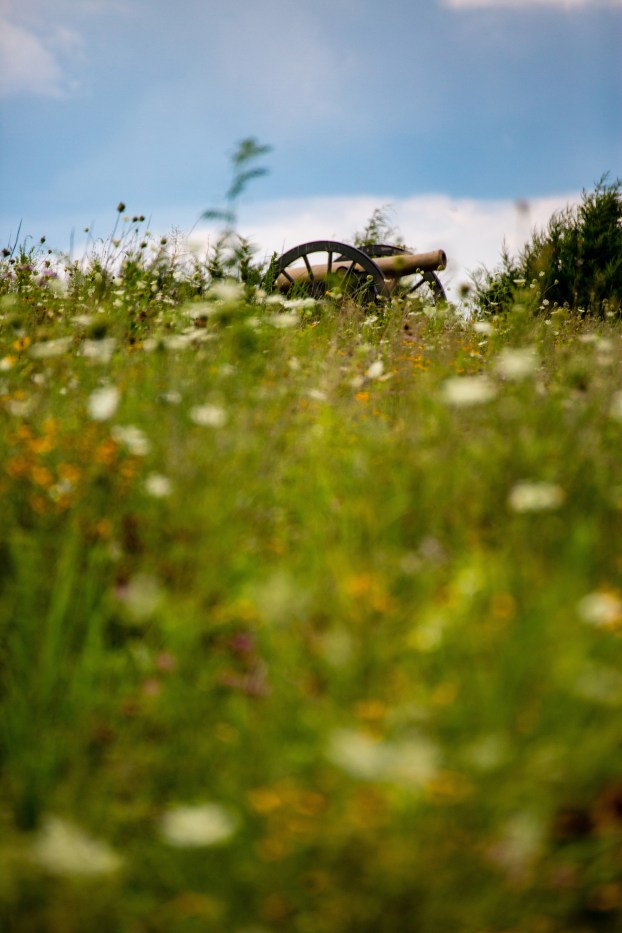 Native grasses and plants added as part of a project funded by Kentucky Fish and Wildlife grow at Perryville Battlefield State Historic Site in 2018. (File photo by Ben Kleppinger)

A bald eagle — the national bird — may have chosen Perryville Battlefield State Historic Site as its home in which to raise a family.

About two weeks ago, park visitors and area residents began reporting that they were seeing a bald eagle in the park, said Joni House, who is a member of the Friends of Perryville Battlefield organization and lives near the park. Now, there seem to be two eagles.

“I’m guessing they’re a pair,” she said. “This is the first time in my entire life that I’ve seen a bald eagle out in the wild.”

She said bald eagles are fairly common in Western Kentucky, where there are lots of lakes. But it’s a bit unusual to see them on farm land. She’s guessing that the pair could have been attracted to the area by Doctor’s Creek and Chaplin River, which flow through the park. “They like to nest around water. … They like to go fishing.”

In honor of the bird (or birds) roosting at the park, the Friends of Perryville Battlefield is hosting a friendly contest for best photo of the eagle. The prize is $50 and the book “Perryville Under Fire: The Aftermath of Kentucky’s Largest Civil War Battle,” by Stuart W. Sanders.

The organization is also taking suggestions for names for the eagles on its Facebook page. Names must be related to Perryville in some way, but can be light-hearted with a play on words, House said. The person with the winning name will also receive $50 and Sander’s book.

The contests “are just for fun” and to raise awareness for the battlefield, House said. “We don’t want people to disrespect the wildlife.”

But they’re encouraging park visitors to come out and “enjoy nature and learn some history,” she said. “Be prepared to see some very cool things.”

There are mink and bobcats in the park, as well as a variety of other birds of prey, she said. “Now there’s something else very cool, to see a pair of bald eagles.”

In the winter, the battlefield “is beautiful, to see the trees and the sun coming down through the sycamores,” she said.

Bald eagles are huge birds, so visitors could be most likely to see them perched on the tops of really big trees, she added. Also, morning and later afternoon may be the best times to spot them, she said.

House said visitors should definitely use binoculars or a telephoto camera lens.

“They won’t tolerate” people getting close, she said. “We don’t want them to be harassed by getting too close.”

House said her research showed that a female bald eagle is about 25% larger than the male and they mate for life. They typically start looking for a place to nest in mid February, she added.

The Friends of Perryville Battlefield have worked for several years and invested hundreds of thousands of dollars to expand the park and convert it back to its natural habitat, House said. “I am extremely proud that all that habitat work has helped to return our national symbol to Kentucky’s most hallowed ground.”

To enter photos and/or name suggestions, go to Friends of Perryville Battlefield State Historic Site Facebook page. The deadline is Feb. 14 and the winners will be announced Feb. 17.

Boyle County has delayed formation of a committee that would recommend improvements to Constitution Square Park until mid-February. Some magistrates... read more