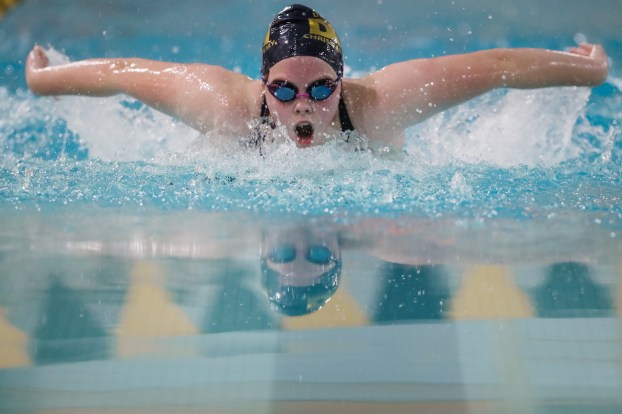 The Boyle County, Lincoln County and Danville swimming and diving teams celebrated their seniors on Wednesday night in the teams’ last regular season meet of the year at Centre College’s Boles Natatorium.

The Rebels were the victorious team out of the five schools that competed. Boyle finished with 352 combined points — 185 from the girls team and 167 from the boys — while Lincoln County finished second with 87. Danville finished third with a combined 76 points while Garrard County and Danville Christian Academy each earned eight points. Garrard only had one boy competing while DCA had a single girl.

Boyle junior Campbell Coyle continued his assault on the Rebels’ record books by breaking the school record for the 200-yard freestyle with a time of 1:47.24. The previous school record was set in 2003 by Ben McDonald.

Boyle finished in first in 18 of the 24 events — although in some they were the only team competing, or faced only one member of an opposing school.

Nancy Haddad took first in the 200-yard freestyle followed by teammates Sophia Fogle and Whitney Bean. Campbell Coyle’s record setting performance was followed by two of his teammates — Farthing and Alex Lockhart — in the 200 free.

Riley Cerqueira took first in the 50-yard freestyle finishing just under 26 seconds while Gilbert and Riley’s younger sister, Maggie Cerqueira came in second and third. Hannah Bischoff of Danville finished a tenth of a second behind Cerqueira for fourth.

Boyle’s duo of Bean and Clark Coyle took their respective 500-yard freestyles. The grueling event only had a total of seven competitors — two girls and five boys. Garrard County’s Cole Hardwick came in second in the boys while Boyle’s Tiffany Couch was the other girl who competed.

Nancy Haddad and Creed Farthing took first in the 100-yard backstroke for Boyle County. Cora Gilbert and Campbell Coyle took the 100-yard breaststroke for the Rebels as well. And Boyle’s strong relay teams — Hoffman, Bean, Nancy Haddad and Fogle for the girls and Farthing, Alex Lockhart, Clark Coyle and Campbell Coyle for the boys — closed out the swimming with wins in the 400-yard freestyle relay.

In what was technically considered the events 9 and 10, but really was the final event of the day, Boyle’s Sophie Arnold and Danville’s Wilcher took first place in the diving competition.