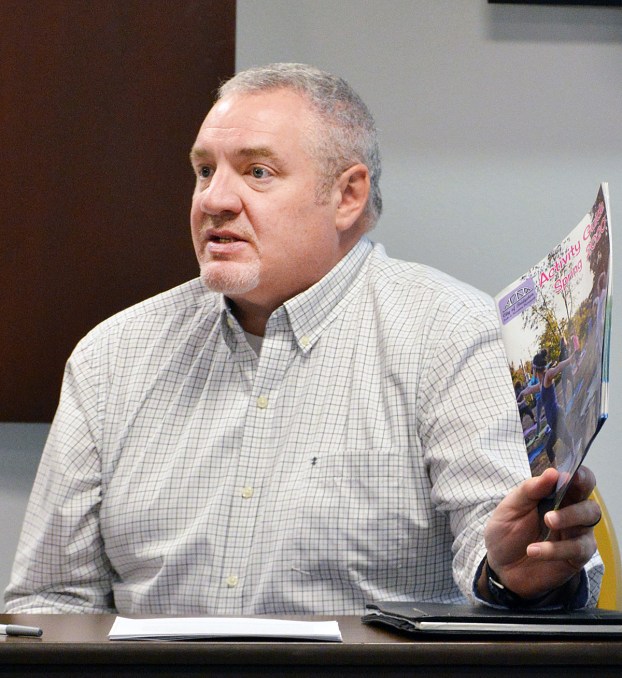 The Danville-Boyle County Parks and Recreation Department and the Convention and Visitors Bureau are forging a marketing relationship that’s designed to promote the area to a variety of residents and tourists.

The first project being coordinated is the production of a booklet that features all of the county’s parks, recreation facilities, programing options and trails. It will also include a pull-out map showing their locations, said Parks and Rec Director John Bell, as he addressed the CVB during its regular meeting this week.

Residents can hold onto the booklet for a quick reference to the different programs being offered throughout the year. It will also be a nice addition to the relocation packets that are given out to people interested in moving to Danville and Boyle County, Bell said. The booklets will be given to businesses, realtors, industries and local medical facilities to be used in their recruiting efforts.

“Anybody who’s promoting the community is who needs it,” Bell said.

He also thinks the booklets should be placed in the lobbies at local motels for guests to browse through in order to find something to do while they’re in town on business or visiting. Maybe they see there’s a dog park nearby. Or maybe “little Timmy” who is staying at the motel during a baseball tournament loves history and his parents see that Perryville Battlefield is only a few minutes away, Bell explained.

CVB Executive Director Jennifer Kirchner said the booklets will also be useful when they have a booth at trade shows.

“The booklet is the first step in our marketing relationship,” she said.

The CVB will pay for the first printing of the booklet, Kirchner said, but probably won’t continue after this year.

“None of us have a huge staff or an unlimited budget,” Kirchner said. “… There’s just a lot of marketing connections we have and options on autopilot that we can do to help them out.”

After the production of the booklet, “Then we will dig a little deeper into sports tourism,” she added. “Hopefully in three years, there will be more facilities, like an aquatics center.”

When families and youth teams are in town competing in tournaments, “They play for an hour on the field and then they’re just here, but they want to do stuff. People need something to do,” Kirchner said.

Sports tourism can “really have a substantial economic impact,” she said.

This summer, every baseball and softball teams playing in tournaments here will be given 15 two-day passes to the Bunny Davis Pool by Parks and Rec, Bell said.

The hope is they might stick around on Sunday night so they can go to the pool.

Once news starts to spread about the free pool passes included in the packets that tournament directors send to the teams, maybe some of them will even come to Danville a day early, Bell said.

“Parks and Rec should be involved in not just rolling out a ball,” he said. “It’s just an aspect. Parks and Rec needs to be incorporated throughout the community” and work with various groups, businesses and nonprofits. It’s a web that goes over the entire community.”

Bell said it was his “plan, a goal, a mission … to get outside of that park (Millennium) to provide opportunities for residents, visitors and guests of our community, and attract those people into the community for our events, for our programs.”

He said Parks and Rec is here to “make Danville and Boyle County a better place to live, work and play everyday.”

Danville City Commissioner Rick Serres, who also attended the meeting, told the group that a disc golf tournament is scheduled for October in Danville. It will bring about 60 people into town for the weekend and they’ll need restaurants and lodging.

“You start weaving all of those little events together, the whole identity of our community continues to rise and change. … It all comes together,” Kirchner said.

A bald eagle — the national bird — may have chosen Perryville Battlefield State Historic Site as its home... read more