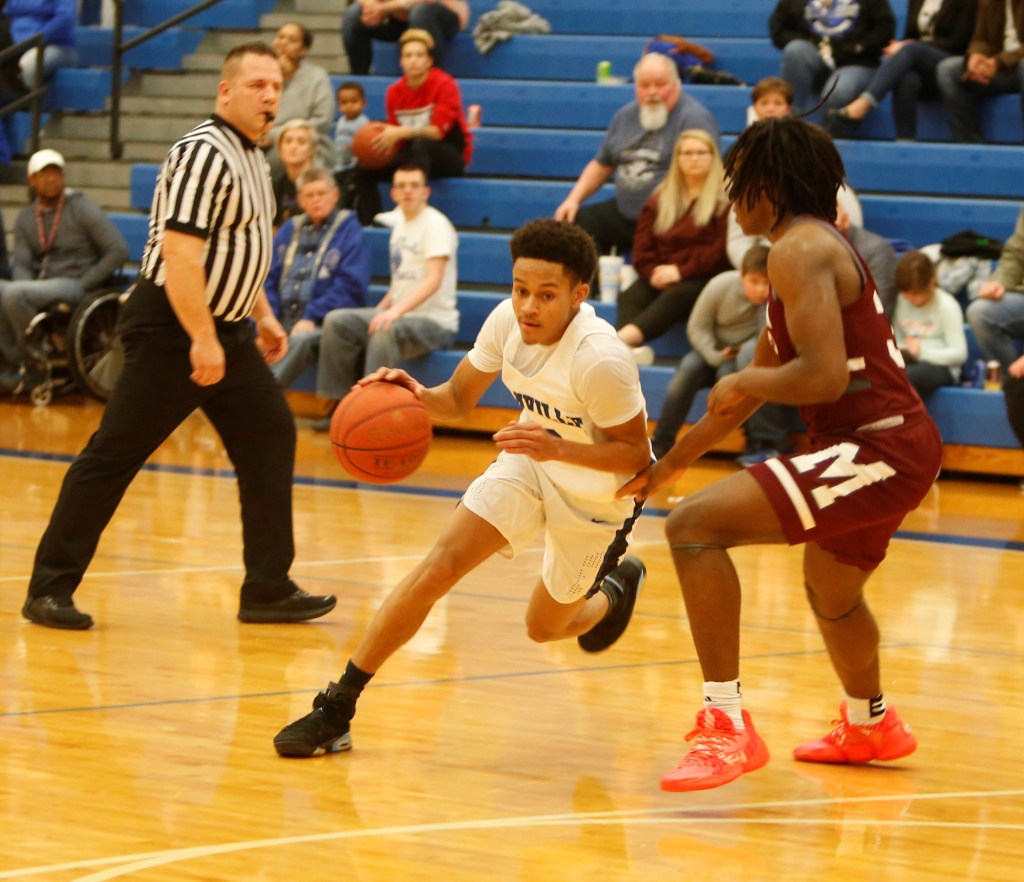 Trey Dawson of Danville drives along the perimeter against Marion County’s Keaton Spalding during the third quarter of the Admirals’ 63-55 loss Friday. Dawson led Danville with 15 points. (Photo Mike Marsee)

It was all coming so easy for Danville. Perhaps too easy.

The Danville boys had everything going their way for a short while Friday night, but only a few minutes later it was all going terribly wrong.

Marion County started making its way back from a 15-point deficit during the second quarter and finished the job in the second half, pulling away for a 63-55 victory.

The Admirals’ loss followed a first quarter in which they raced up and down the floor seemingly at will, scoring in transition both at the basket and behind the 3-point line as they opened a 15-8 lead that would grow to 21-9 by the end of the period and 24-9 early in the second quarter.

“They took some of that easy stuff away from us, and we didn’t respond,” Danville coach Ed McKinney said. “It might have come a little too easy early. It lulls you into a false sense of security.”

Host Danville (14-7) managed to stay on top after struggling through the second quarter, but the Admirals couldn’t survive a second half in which everything that was going right in the first quarter went terribly wrong. They were outscored 54-31 over the final 22 minutes and outrebounded 29-13 over the final three periods as they suffered their third straight loss after winning 13 of 14 games.

McKinney said the Admirals took their eye off the ball in the two defeats this week – to Garrard County on Monday and to Marion on Friday.

“You’re just in that grind part of the season. If I knew (what happened) I’d change it,” he said. “This is two games in a row here where we’ve just kind of lost our intensity. We’ve got to figure it out.”

The Admirals will have to do that on the fly. They return to the court tonight in Franklin County’s Gary Moore Classic for a game against Western Hills that was just added to the schedule, and they have 45th District games Tuesday against Garrard and next Friday at Boyle County.

The first sign that Danville might not have been able to sustain its hot start came midway through the second quarter, when Marion (15-7) strung three straight baskets together to pull within 28-21. But the red flag went up early in the second half when the Admirals squandered back-to-back scoring opportunities.

“I thought early in the half we just fumbled a couple of plays away. The first two or three minutes there we made a couple of mistakes with the ball,” McKinney said. “In these games you need those, but they scored off those. … They just took advantage of our miscues and they get some intensity and momentum and they’re playing downhill.”

Marion scored eight of the first 10 points in the third quarter – six came from John Adams – to pull within 34-33. Danville regained a six-point lead after a layup by Trey Dawson and a 3-point basket by Dante Hayden, who scored 15 and 14 points, respectively, but that was all the momentum the Admirals could muster.

Jamison Epps’ putback and layups by Adams and Keaton Spalding allowed the Knights to tie the game at 39-all, and a hook shot by Epps gave them their first lead at 41-40.

Two 3-pointers by Ethan Cooper put the Admirals on top once more at 46-45 with 7:13 remaining in the fourth quarter, but Marion scored 13 unanswered points while Danville went scoreless for almost three minutes.

Epps, a 6-5 senior who ranks second in the state in rebounds at 12.8 per game, had six points during that run. The youngest son of former Marion and University of Kentucky star Anthony Epps, he had 11 points and 11 rebounds in the second half and finished with 20 points and 21 rebounds.

“When he decides to go to work and you’re not intense, he’s going to get everything because he’s big enough and athletic enough to dominate the game,” McKinney said.

“They just took it to us on both ends,” McKinney said.