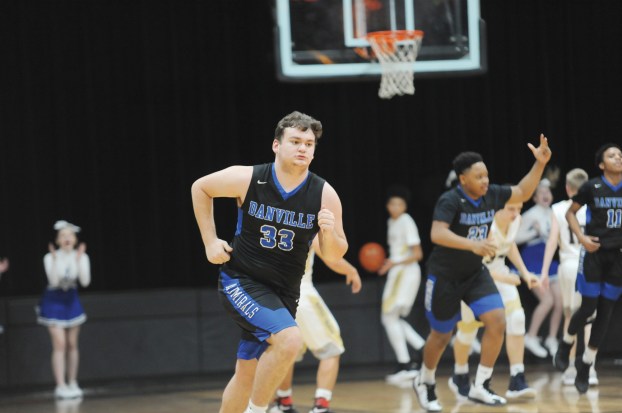 Corey Zeznanski is a leader from the sidelines

Perhaps no player I’ve spotlighted this year has better fit the idea I had in my head when I decided to start this weekly feature than Danville’s Corey Zeznanski.

You might not know that name, but, according to coach Ed McKinney, Zeznanski is one of the most important pieces to the Admiral basketball team.

“Corey is both a huge part of our team and any success we have,” he said. “Building a sense of team may be the most important ingredient in having a successful high school basketball program and Corey does more to help build that ‘teamness’ than any player I have ever coached.”

And that is why McKinney wanted to highlight him.

Zeznanski doesn’t get in the game a lot — he’s appeared in nine games this season and gotten off 21 shot attempts — and that’s fine with him, as long as the team is winning.

“I’ve always been a team first guy,” he said. “I can play the whole game and we lose and I don’t care or I can not play at all and we win and I’m perfectly fine. As long as we get the win, I’m not worried about playing time.”

But when he does get in and lets a shot fly, the whole bench and student section erupts when the shot falls.

“It feels really nice just to see my teammates cheer and even when I’m not in the game, my teammates still respect me,” he said. “They’ll just let me know that I’m doing my part in practice to help the team get better. So it means a lot that I know they’ve got my back.”

It’s that team-first mentality, McKinney says, that really sets him apart from most kids.

“He’s just a unique kid. You just don’t find kids like him every day,” the head coach said. “He’s truly selfless. He’s always thinking about others before himself. We have a lot of good kids on this team, but the way he handles himself and goes about his business. He doesn’t get a lot of playing time, but the way he practices, and just treats our other kids. He’s truly special.

“He loves his teammates and wants to see them succeed more than anything,” he added. “For people who play sports, and don’t get in a lot, there’s a tendency to think ‘I hope the guy in front of me messes up and maybe I can get in.’ But that’s not Corey. He roots for everyone with all of his energy and it doesn’t feel forced. It’s so genuine. I don’t think he comes to the games thinking he has to do that — it’s just who he is. He just doesn’t think about himself a lot.”

But that doesn’t mean that he doesn’t remember his moments of glory. In a JV game his freshman year, he hit a halfcourt buzzerbeater to win the game.

“The coach drew up the play so I can get it, turn around and shoot it,” he recalled. “My teammates trusted me as a freshman to shoot it. My teammates went crazy when it went in. They tackled me, everybody jumping off the bench. It was just a great feeling.”

Zeznanski — and that is pronounced more or less how it’s spelled — is all about fostering a team atmosphere. Before every home game, he goes out to eat with sophomore Aden Slone and freshman Ethan Cooper — two players who were not on the team last year — and tries to get the entire team to come with them. On away games, though, his routine is a little simpler — “Something to Prove” by Lil Baby.

It isn’t just being part of the bench mob when Danville makes a big run in a critical game. It isn’t just being a spark of energy when he’s on the floor. It’s little things that Zeznanski does that makes him special to coach McKinney.

“Oh there are so many,” McKinney says about his favorite story of Zeznanski. “I hope I’m not going to embarrass him with this, but after every game, win or lose, I always get a text from him. It’s always about the game and it’s always something positive. That’s just special right there. The way he works and the way he practices — you just can’t describe it unless you’re around him all the time. He goes about it in a very mature way. He’s so mature beyond his years.”

That maturity is evident when you get the chance to talk to Zeznanski — who’s already got a plan to get his HVAC license and start a company after college. It’s seen in his advice to kids who are getting ready to begin their own high school journeys.

“You need to focus on school and make sure your school work is done first. If you’re on the team and you’re not playing a lot, the most important thing is just to know what your role is. Be there for your teammates, have their back.”

There’s not one Admiral who doesn’t know that Zeznanski has their back.

The Boyle County, Lincoln County and Danville swimming and diving teams celebrated their seniors on Wednesday night in the teams’... read more