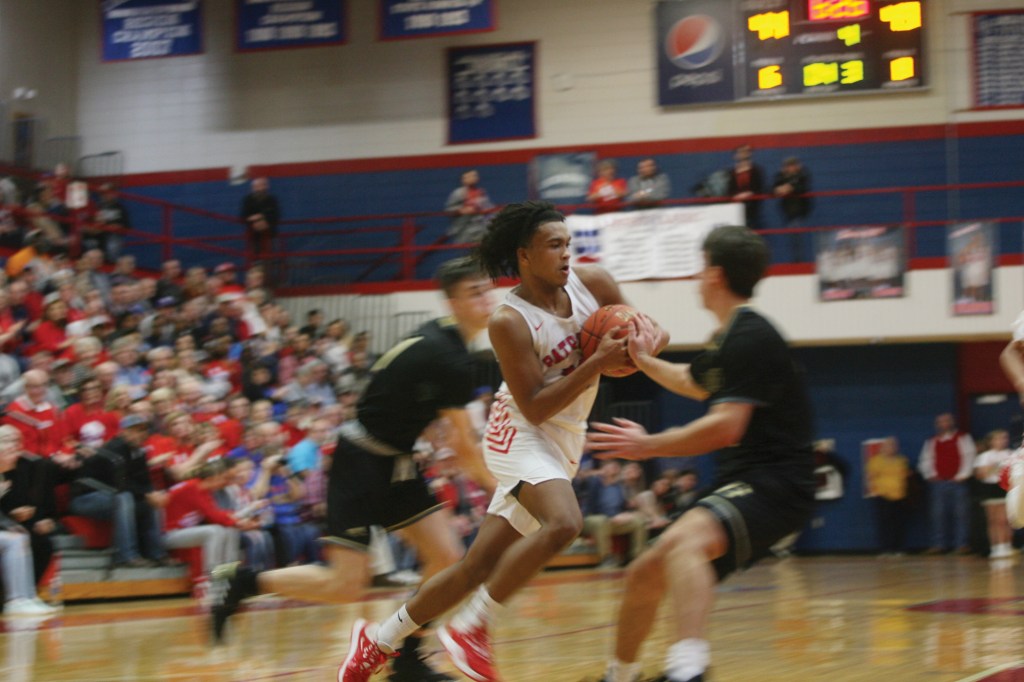 The win column might look the same as it did the last time Lincoln County and Boyle County met this year in a district doubleheader, but the path to get there for the boys was quite different.

The last time the two teams met, the Patriots exploded and beat Boyle by 30 points. This time, the game was still in question deep in the fourth quarter before Lincoln closed the door to win 68-60.

“We knew it wouldn’t be (another blowout),” Lincoln coach Jeff Jackson said. “They’ve got a really good team and are really well coached. This is a great rivalry and one game to the next don’t mean anything, records don’t mean anything. This is a district game and there’s just so much respect — for what they do and I think it goes both ways. But when you step between the lines, it’s a battle.

“I’m proud of our kids. We told them it was going to be tough — football game intensity and it was. We made the plays necessary to get it done.”

In the first half, Lincoln center Riley Bodner was too much for Boyle to handle — pulling down seven rebounds and scoring 10 points. But foul trouble kept him limited in the second half before he fouled out in the fourth.

Still, the Patriots outrebounded the Rebels by 18, including 15 offensive rebounds.

Too many extra shots at the goal. Every statistic — we out shot them percentage wise but we let them get more shots and that comes down to rebounding,” Boyle coach Dennie Webb said.

“We had some shots off those rebounds but we couldn’t put it back in the basket,” Jackson said, laughing. “I thought Bryston Alcorn did a really good job of running the ball down and getting rebounds.”

Alcorn finished with 12 rebounds — seven on the offensive end — and eight points.

But when it was crunch time, both teams turned to their star sophomores — Jaxon Smith for Lincoln and Luke Imfeld for Boyle.

Smith finished with a game high 23 points while Imfeld was close behind with 20. In the fourth quarter, it seemed like every play was made by one of those two.

“You just let them play,” Webb said. “That’s two really good sophomores and they both had it going for a little while. We were trying to get Luke the ball in certain situations and they did a nice job on him defensively. (Elijah) Frye does a nice job on defense. It was fun to watch them go back and forth a little bit but we got to get stops.”

“Two pretty good players. They’re great players and I like watching Jaxon a little more,” Jackson said. Imfeld is really good and we did some good things on him — Elijah did some great work on him when he came back in, kept him from getting the ball.”

Despite the result, Webb knows that this season is about growing and adjusting to a new system — and can be encouraged by the measuring stick in the Lincoln rematch. Still, he also knows that losing always stings worse than winning.

“Anytime you lose one like this it’s hard. It’s a big rivalry game for us and everybody wants that win,” he said. “I told them in there that it’s disappointing but we’ve got everything in front of us. Everything’s new for us — I’m new, what we’re trying to do is new. We’re getting there but it’s taking some time.

“We’re figuring it out and that’s what I tried to get across tonight. Nobody’s down on them. They fought and competed. We’ve just got to keep grinding and keep building and keep growing. I think they’re a cohesive group and they always work hard. They’ll rally but we’ve got to keep going.”

In the opener of the day, the Lady Pats handed Boyle its sixth straight loss, 62-51.

But in the first quarter, the Rebels came out on fire, jumping out to an 8-0 lead before a 14-1 run put Lincoln up and they didn’t look back.

“(Boyle) came out ready to play — hit us in the mouth early. I’m really proud of how my girls responded,” Lincoln coach Cassandra McWhorter said. “I told them before, somebody jumps on us 6-0, 7-0, 8-0 — if it had gotten to 8-0, I’d have called a TO. I wanted them to learn to play through adversity when their backs are against the wall and it’s still in a reachable amount — especially early in the game and the atmosphere it is with it being a district game.”

The first quarter troubles were compounded for Lincoln when star senior Trinity Shearer went down with an ankle injury and wasn’t able to return for the game.

But the Patriots got key play from players who needed to step up in Shearer’s absence.

“We had all-around different people step up,” McWhorter said. “Chloe (Ralston) is coming back off an ankle sprain from the last time we played Boyle. She hit some huge threes, especially early to stretch that lead out.

“Alyvia Taylor who doesn’t get a lot of varsity clock but she’s consistently — in practice and in JV games — her basketball IQ is so high. I knew her time was coming and her number was called tonight and she stepped up and did a great job. All around the locker room people stepped up and made plays and that’s what team basketball is about.”

One bright spot for Boyle on the night, and for the last month, has been the emergence of Alyssa Wray. In the fourth quarter, Wray almost took the game over and led the Rebels back to a win.

“In the last eight or 10 games, Alyssa has really asserted herself as the primary focus of our offense,” Boyle coach Ryan Wiersma said. “Everybody’s taking Keely Bowling away. When they don’t have the extra defenders to help on Alyssa, she’s done a great job of making herself available and finishing at the rim. She’s also done a great job at the free throw line.”

“She’s hard to handle,” McWhorter said about the Boyle senior. “(Emily) Estes’ injury — she’s a freshman but a big body you can put in there against Wray. Lydia (Rice), Savannah (Robbins) and (Hayleigh) Ellison did everything they could with her inside. But she’s gradually improving and becoming a better player. She was tough inside for us tonight and had a really good game.”

Despite the record, Wiersma is encouraged by the progress he’s seeing in his first year on the job.

“We’ve done some things to be in some games that they haven’t been in the last few years,” he said. “So we’re focusing on the positives and there’s a lot of positives we can take away from tonight. We’ll learn from the things we didn’t do well and how to do them better when we’re in these situations again.”

Corey Zeznanski is a leader from the sidelines