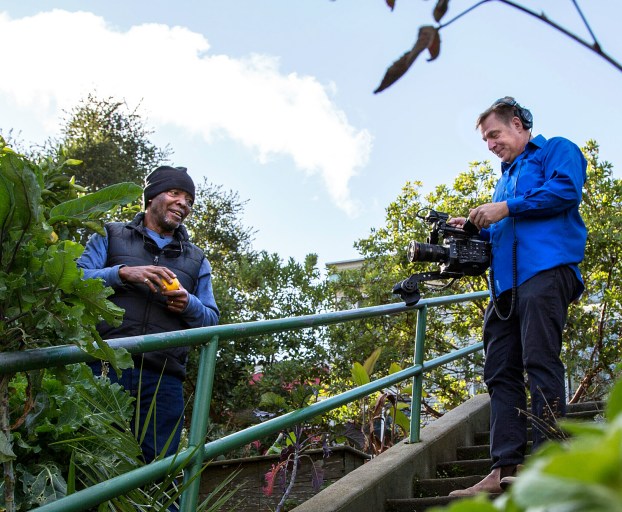 Mission Films invited James Ross of Danville back to San Francisco to be interviewed for a documentary film about the Quesada Gardens Initiative. Ross was one of the founders of the program, which now encompasses flower and vegetable gardens, public art and community gathering spaces, all led by the residents themselves. Since returning to his hometown of Danville in 2010, Ross has helped establish five community gardens here, often with the help of the Garden Club of Danville. (Photo submitted)

In 1935 the train station was one of the major entrances to downtown Danville, welcoming dozens, if not hundreds, of passengers a day. That’s why the newly formed Garden Club of Danville planted a hedge of rose bushes at the station. They also planted 15 sugar maples on South Fourth Street and masses of annuals at the other town entrances. Since that beginning 85 years ago, members of the club have been working to beautify the town.

We get out there with shovels and clippers, planting and caring for public gardens at the McDowell House and Constitution Square. The club sponsors popular garden tours every other year and informative programs are presented at monthly meetings. Members, both beginners and experts, serve on committees, volunteer for projects, give demonstrations, create flower arrangements for public events, take field trips, and have a good time together.

Want to learn about organic gardening, native plants, bees, butterflies, trees, or flower arranging? We can help. Wherever you find gardening projects in Danville, you’ll likely find the women and men of the Garden Club.

One of the club’s busiest members is James Ross, co-founder of five community gardens in Danville. This year he is being featured in a new documentary film by Mission Films of California. When the documentary is completed in February, it will be introduced at six film festivals throughout the country and offered to cable outlets such as Netflix. The film is about a blighted neighborhood in San Francisco that was transformed by a group of residents who decided to begin gardening in the median strip of Quesada Boulevard. Ross was one of those residents. Before returning to his hometown of Danville in 2010, Ross lived for 33 years in San Francisco with his wife and children. 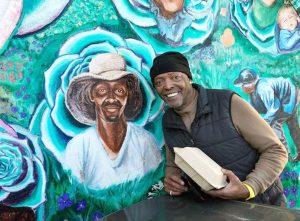 James Ross of Danville poses by a mural picturing his Aunt Sarah at Quesada Gardens in San Francisco. In 2003, Ross and his aunt were among the co-founders of this community garden that transformed a blighted neighborhood and is still thriving. Ross will be featured in a documentary film about the founding of the garden.

Mission Films recently invited Ross back to California to be interviewed about the beginnings of the project called The Quesada Gardens Initiative. He spent a week there telling his story to the filmmakers. Before 2002, public spaces along Quesada Boulevard were distinguished by dead grass, garbage, violent crime, and a thriving drug trade. Then, one woman planted some collard greens and a few flowers in a bare spot and neighbors took notice. According to Ross, people who didn’t know their neighbors and had been afraid to come outside began venturing out for conversation and a little gardening. In 2003 Ross and others co-founded the Quesada Gardens Initiative, which has grown over the years to encompass much more than gardens. The neighborhood is now transformed with gardens, public art, and a thriving spirit of community with a network of gathering spaces, all led by the residents themselves.

Free healthy food was only one benefit. Ross saw the power of gardens to bring people together and improve neighborhoods. He brought this community gardening concept to Danville when he moved back. He joined the Garden Club of Danville and began networking to find a location and volunteers for Danville’s first community garden in a vacant lot off South Second Street. That garden moved to Jennie Rogers School and was active until the school closed. The Garden Club contributed funds and volunteers from the start. Charles Meshako and the late Terry Taylor were other men in the club who pitched in to help, along with many of the women.

In the past 10 years, Ross has helped establish five community gardens in Danville. Two of them are still active. Batewood Homes, a public housing project on South Second Street has a thriving community garden, thanks to ongoing help from Ross and many volunteers. Grace Gardens at First Christian Church is an organic garden which provides fruits and vegetables for those in need and for church members. He had a hand in that garden, too. There has always been an emphasis on including children in the gardens, teaching them about nature and healthy diets.

Ross commented that, “It’s a lot of work. You must really want to do this. Community gardens require teams and leaders and volunteers to organize projects, handle publicity and scheduling, and apply for grants to cover the costs.”

If you feel inspired to contribute time or money, the rewards are great. Whether you work best with a trowel or a telephone, there could be a job for you. Spring will be here before you know it. Becoming part of a community garden team may just be the inspiration you’ve been waiting for. When the movie about Quesada Gardens is released, we’ll let you know where you can watch Ross, our own movie star.

To contact Ross and learn more about Danville’s community gardens, or to volunteer, email him at spreadingcompost@gmail.com. To learn more about the Garden Club, see www.thegardenclubofdanville.org.

Although the DanTran bus system has been around for 12 years, many in the community aren’t aware of exactly what... read more