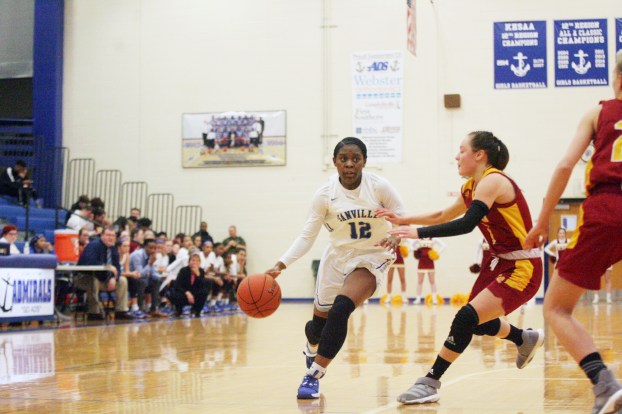 Tyliah Bradshaw led the Ads in scoring with 16 off the bench. (Photo Derek Brightwell)

In the first rematch of a district game, the Lady Admirals completed their first sweep of the season, knocking off Garrard County 75-51 to move to 17-6 on the year and 4-0 in district play.

“We played them a week ago and I was concerned about a little bit of a letdown, but I thought we came out in the first quarter and played hard and set the tempo,” Danville coach Judie Mason said.

Danville started out on fire — outscoring the Lions 26-16 in the first period after Tyliah Bradshaw hit a buzzer beating three to give her eight points in the period.

Garrard played better in the second period, but still trailed by 11 heading into the half. But in the third quarter, the Ads took control of the game on the back of an ramped up press.

“We went from a zone press to man-to-man and I think it confused them,” Mason said.

“First half we handled it a lot better. I think we had 10 turnovers in the first half, but in the second they ramped up the pressure,” Garrard coach Jimmie McCulley agreed. “They’re a very good team at what they do and they cause you to make mistakes.”

The press was the difference the last time the two teams met — a 55-31 victory for the Ads at Garrard — and McCulley was encouraged to see his team improve, but couldn’t sustain it for 32 minutes.

“They impose their will on you. If you have five people coming at you for 18 to 32 minutes, it’s going to wear on you,” he said. “That’s what they do, they wear you down — they’re big, physical, athletic and well coached. That’s their style and it’s really the style for them. That’s why they’re the region favorites.”

It was the first and third periods that made the difference for the Ads Tuesday night. Garrard outscored Danville 27-25 in the second and fourth quarters, but were outscored 50-24 in the odd numbered quarters.

Mason also was pleased with the way her team won. In Monday’s game at Tates Creek, Cam Preston led the team with 23 points followed by Lara Akers’ 19 and Desiree Tandy with 15. On Tuesday, Tyliah Bradshaw had 16 to lead the team followed by Ahyana Burnett’s 15 and Akers’ 14.

“That’s the beauty of this team and that’s what I try to tell them. I don’t have a single player out there who’s a great individual player, but when we work collectively — and in two nights we have six different players in double figures,” Mason said. “That’s what makes our team good is that they can’t key on one person.”

Having Bradshaw come in off the bench with the ability to lead her team in scoring obviously is encouraging for Mason, but also benefits the team in a less obvious way.

“It also gives Ahyana a break not having to run the point. It lets us move Ahyana to the two and she can feed the post,” Mason said about her backcourt tandem. “Tyliah can see the floor because she looks up a whole lot. So when I’ve got Tyliah and Ahyana together, I like to play Tyliah at the point because she gets the ball up the court better.”

And as far as Burnett goes, Mason commended her effort in not just Tuesday night’s 15 point performance, but Monday’s two point game as well.

“I told Ahyana — she had two points last night and it was one of her better floor games,” she said. “We beat a good Tates Creek team with Ahyana only having two points. Tonight she has 15. We are a pretty daggone good team when we play together.”

McCulley was encouraged with his team’s improvement from the meeting a week ago that had the running clock midway into the third quarter.

“We improved dramatically. The scoreboard doesn’t show it, but we fought for 32 minutes. Last game, we were big eyed and intimidated and tonight we weren’t intimidated — we took it to them,” he said. “You know, we have some unforced turnovers here and there and some missed a few free throws and it snowballed. I’m proud of their effort and I couldn’t ask anything more of them.”

Danville now sits at a perfect 4-0 in the district with two more games to go. Friday night they are set up for the rivalry game at Boyle County and then travel to Lincoln County on Valentine’s Day. But Mason hasn’t even thought about those games yet.

“I’m not worried about that, I just want to get better every game,” she said. “You know me, I never look ahead — I didn’t even look ahead to Glasgow (in the All-A). We have to win Friday night. I haven’t even looked at Boyle County yet, all I was looking at was Garrard.”

Garrard County travels to Lincoln on Friday for the first game in a double header.

If you had any questions about how Danville would respond to its overtime loss at Garrard County a week ago,... read more