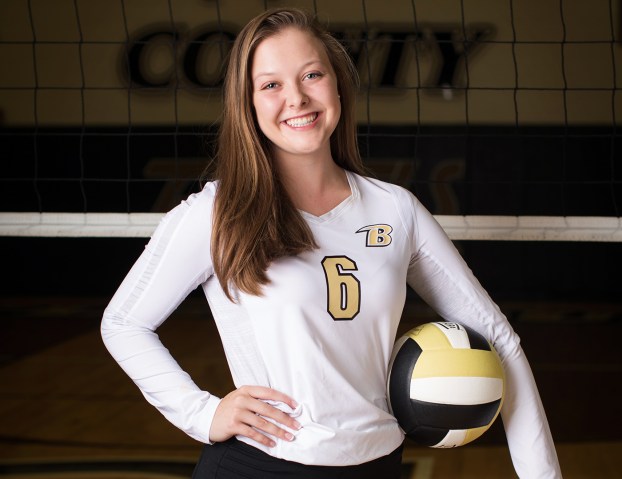 As captain of the volleyball team, Sabree Norris serves as an inspirational leader for her teammates. (Photo by Christy Lee Photography)

From Our Schools: Sabree Norris hopes her servant leadership inspires others

Many people search for inspiration from outward sources; one Boyle County student’s inspiration definitely comes from within.

Senior Sabree Norris’ Twitter bio certainly exemplifies this idea. By “trying to serve as an inspiring beam of light,” she strives to set an example for people around her and to be the best version of herself.

Norris spreads her strong servant leadership throughout numerous school and community activities. Currently, she is the community service coordinator for the National Honors Society, where she heartwarmingly initiated an activity called, “No One Sits Alone Day”.

For the Kiwanis Club International, she serves as the secretary and is responsible for creating web page bulletins. She is also an eight-year children’s ministry volunteer at Southland Christian Church.

Being the captain of the volleyball team, she was a three-time repeater on the Kentucky High School Athletic Association All-State Academic team, and as a highly ranked Advanced Placement and honors student, Norris was selected to represent Boyle County as our Heisman High School Athletic Scholar.

Norris’ love for helping others and being involved began in church.

“I have basically been serving in the Sunday school environment since I was big enough to pick up a kid on my own,” she said. “I remember that my parents, and my brother, and I decided that it was really important to serve as a family. It is so much fun to share one of the greatest love stories (Jesus) of all time.”

However, simply helping others is not enough for Norris. She feels a need to mentor and build up the next generation, and does so by taking advantage of leadership opportunities in many aspects of her life.

“I was the only senior on the volleyball team, and I was really thankful for that opportunity to be able to lead and play alongside some really amazing girls,” she said.

Her motivation to remain involved and connected comes from community influences.

“I am really thankful to say that I am quite easily inspired, especially by the educators in our community.”

While “leader” is not a title Norris would necessarily give to herself, she is glad that others would consider her one.

“I think being a leader is just something that I’ve stepped into. I think a really good characteristic of a leader is not necessarily thinking that you deserve to be one.”

Along with leadership, extreme kindness comes naturally to Norris. Serving and pouring into others makes up the average day for her.

“It’s really important to give back to anyone around me no matter what. I know that even if I’m not necessarily in a position of power to do a lot, I can always be kind and give.” 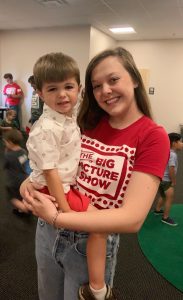 Close friend and fellow senior Morgan Wilson has never known Norris to be anything but kind. “My nickname for Sabree has always been ‘Sunshine’ because that’s exactly what she is,” Wilson said. “Sabree immediately lights up any room she walks in with her contagious smile. She is the most optimistic person I have ever met, and her positive attitude rubs off on everyone she meets.”

Undoubtedly, these qualities will benefit her journey as she enters the education field. Currently, she works alongside English teacher Katie Tiller as an aide at the high school, and with Kendra Goodpaster’s Child Services class at Woodlawn Elementary. She enjoys the experiences and opportunities to network.

“I think that these skills will definitely help me when I get older because I want to be an elementary school teacher,” Norris said.

Finding additional time to work with students, Norris has been volunteering for two years in the after-school program at Woodlawn Elementary, where she coaches students in math, science, reading and writing — and helps them create crafts and projects.

These positive experiences have certainly helped her grow as a person. But like any normal teenager, Norris has still had to deal with her share of disappointments. One in particular became a blessing in disguise.

“During my junior year, I was one of the only students that wasn’t accepted into the Governor’s Scholars Program and it really depleted my confidence,” she said. “But, I came to learn that it was all part of a bigger plan. Because I didn’t go to GSP, I actually got to go to a church camp and mentor middle school students on Western Kentucky’s campus, which is where I fell in love with the university.”

Soon after her enjoyable experience on campus, she applied to the school’s honors college and was later accepted. Norris is excited to begin her pursuit of both a bachelor’s and master’s degree in elementary education.

A career dedicated to helping children seems perfectly fitting for her.

“I feel like kids are naturally drawn to me,” she said. “I don’t know if it’s because I’m slightly goofy or a little bit tall, but I really like to say that kids honestly already gravitate towards me. I think that being a teacher is one of the most selfless professions right now, and I’m so thankful that they sacrifice so much of their time and give so much effort on our behalf.”

Likewise, Norris continually makes sacrifices to lift up others, placing their needs before her own. Humility and gratitude admirably make up her framework.

“I wouldn’t be anyone if it wasn’t for the people that poured into my heart all of these 18 years.”

Danville Admirals newest anchor is a real one, surplused by Navy