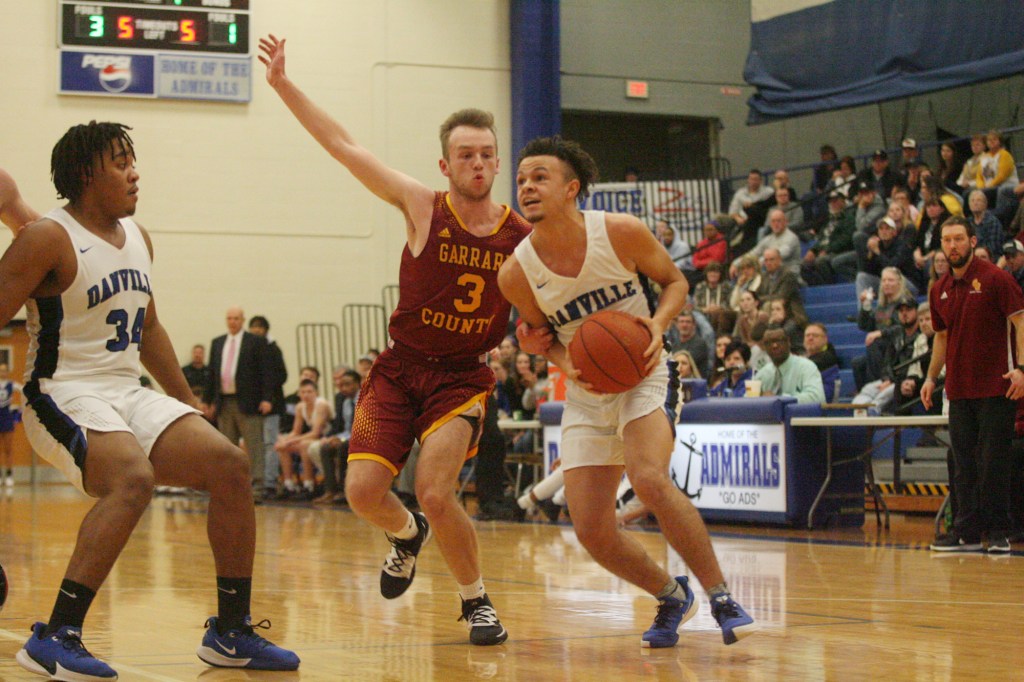 If you had any questions about how Danville would respond to its overtime loss at Garrard County a week ago, the Ads answered that question in the first quarter of their 67-54 win.

Danville’s press was ferocious, its attack was aggressive — maybe too aggressive as they picked up two charges before they scored a point — and it resulted in a 27-14 lead at the end of the first.

Aden Slone scored 17 of those points, but Trey Dawson got a block and then followed the missed shot on the break for an offensive rebound and a tip score and then got another put back when Dante Hayden got a steal to lead the break. Darrain Bell recovered his own miss off a fast break shot for another basket and Slone capped the run with a steal and a bucket of his own.

Just like that, it was 20-10 and Garrard was reeling and needing a time out.

“We knew they were going to be ready to play,” Garrard coach Ryan Young said, saying that what disappointed him most was the effort on the boards. “They had 14 offensive rebounds for the game. You give up that many against them it’ll be a long night.

“We won the rebounding game the first time. They crashed really hard and I feel like our guys did a poor job taking that challenge tonight.”

For Young, the big first quarter deficit was exactly what he didn’t want to repeat from his team’s overtime win a week earlier.

“We knew they’d come out hot. We tried to not duplicate the same thing we did in the first game and dig a hole,” he said. “We knew the environment was going to be rowdy, especially after some of the things that took place the first game. Hopefully we take it as a growing experience and learn from it and move on and do better.”

For Danville, the key to the game would be how they stop Garrard star Brayden Sebastian. In the first meeting, he had 47 points, most of which came in the fourth quarter and overtime when he took the game over.

“Some of that is just you hope he misses shots. He gets shots — some he’s going to make, some he’s going to miss — you just hope you can rush him a bit,” Danville coach Ed McKinney said of his strategy on stopping the star. “He’s so good, you’re lucky when he misses. We got a little more pressure on him tonight. We were more aware of where he is. Of course, when he gets 40 every night, you should be aware of where he is. That doesn’t take much coaching. Everyone in the gym should be trying to give help on him.”

Another improvement from the last meeting for Danville was the free throw shooting. They missed 14 in the fourth quarter and overtime last week and while they only had 12 attempts Tuesday night, they converted nine of them.

“We didn’t have a lot of them, but we made them late when we needed to have them. Over there we made none when we needed them,” McKinney said. “You miss 14 in the fourth and overtime, you’re not going to win a lot of games that way.”

Despite the hot start, McKinney said that he still sees his team’s tendency to let up with a big lead.

“We’ve had a hard time — the Marion game we’re up maybe double figures, Somerset in the All-A we’re up 26-16 — when we have a lead, we’ve had a hard time making plays,” he said, referencing two losses. “Good teams take those 12-15 leads and make it 25. We’ve got to work on that because we’ve had a lot of opportunities to put our foot down and we’ve just let them go.”

Still, he’s happy to come out of this one with the win.

“We’re happy to get any win in the district — they’re all tough to get,” he said. “Overall we played well — they take some things away from you. Some guys are going to have a good game offensively. We’ve got a lot of guys who can score, so they’ll take some things away from you. You can’t force it. You’ve got to let what happens work for you and we did a good job of that tonight.”

Danville goes to Boyle County on Friday for their next game, meanwhile Garrard will be tipping off at Lincoln County around the same time.