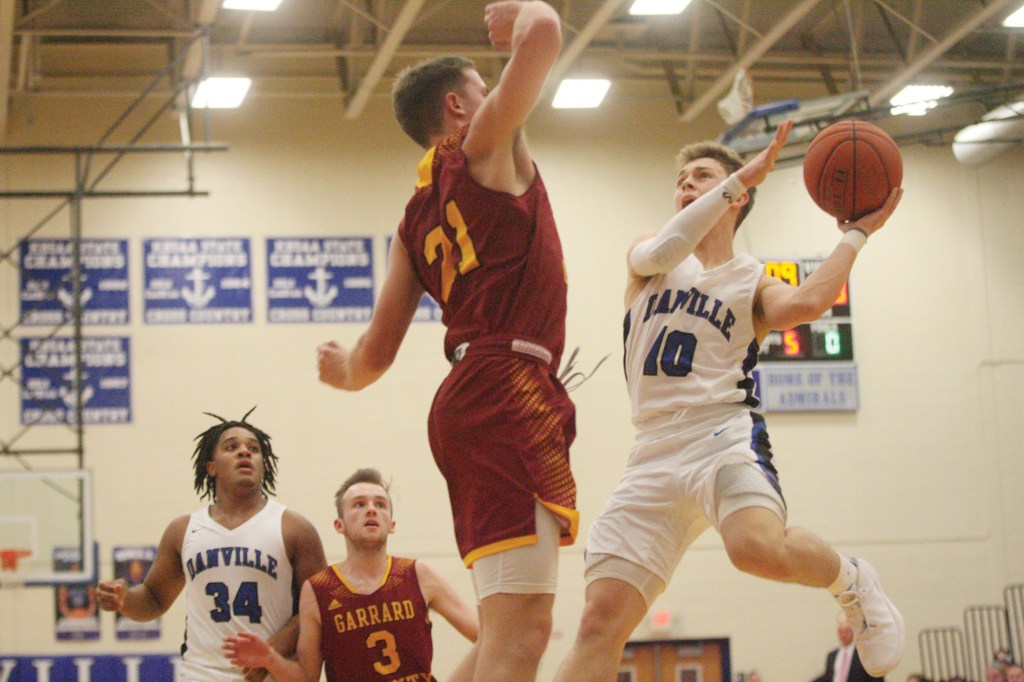 Aden Slone matched up with Garrard star Brayden Sebastian (21) for much of Tuesday night's game and outplayed him. (Photo Derek Brightwell)

Before the Danville and Garrard County girls game tipped off, sophomore Aden Slone was shooting threes in a dress shirt and bowtie. And he wasn’t missing. He joked that if he kept shooting like that, he’d wear the bowtie in the game.

He must’ve worn it — at least in the first quarter.

He came out on fire — scoring 10 of Danville’s first 12 points, including a set of back-to-back dagger threes. He finished with 17 points in the first quarter.

“He’s hard to guard when he’s hitting the three because he gets to the rim and finishes so well. He’s tough to cover,” Danville coach Ed McKinney said of his guard.

Slone would finish with a game high 26 points.

Slone was also distributing the ball at an elite level. Finding the open man when the entire Garrard team closed in around him in the paint or making outrageous no-look one handed passes from the top of the key. That’s the kind of guard Slone wants to be.

“He wants to get everybody involved and play the point guard role. But you’ve got to take what they give you,” McKinney said. “He wants to be a set up guy first and we talk about if you’re going to be a good set up guy — if you want to be the guy who quarterbacks — then you have to be able to score. He made some really great passes tonight.”

It became clear to Garrard County coach Ryan Young that Slone was the guy to stop for the Admirals on Tuesday night, and he tried several different looks to do that.

“Going into it, you try to switch up your ball screen coverages. We tried some length on him with Brayden (Sebastian) and more quickness with (Montavin Quisenberry),” he said. “But when he’s coming over half court and pulling it from 25, that’s tough. Credit to him, he’s a great point guard.”

It wasn’t just with the ball that Slone drew the matchup of Garrard star — and one of the region’s top players — Sebastian. He was matched up with the much bigger Sebastian on defense as well, and was a crucial part in slowing him down.

For Slone, the explosion of points had to feel good — coming off a game where he only scored three in a win over Western Hills and the last meeting at Garrard County where he missed four free throws in a row late in the game.

After Tuesday’s win, though, he was all smiles and just ready for the rematch with his old team — Boyle County — on Friday night.