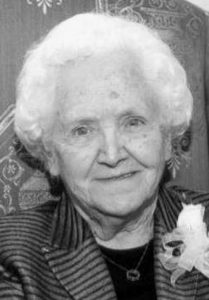 Christine “Teenie” Tudor, 95, of Danville, passed away February 4, 2020 in Danville, Kentucky. She was born on April 8, 1924 in Hazard, Kentucky to the late William Press and Mary Ellen Morris Haney. Teenie was preceded in death by her loving husband, Nelson Tudor.

At age 18, Teenie left Hazard and moved to Cincinnati, found a job, and lived on her own. She later moved to Louisville where she met Nelson and became a military wife for over 20 years. The family settled in Danville after Nelson retired. Teenie was a member of Lexington Avenue Baptist Church and an avid bowler well into her 70’s. But Teenie’s primary love was her family and her family adored her.

Funeral services will be 3PM Friday, February 7, 2020 at Preston Pruitt Spurlin Funeral Home. Burial will follow in Danville Memorial Gardens. Visitation will be Friday from 1PM until service time.