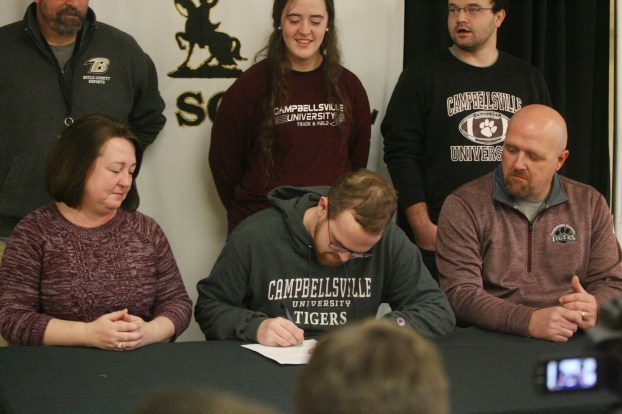 Coffman to attend CU as videographer

In what might be a first for National Signing Day, Boyle County football videographer Braydon Coffman signed his letter of intent to attend Campbellsville University.

The Boyle County football film set up — both on the field and at practice — was one of the most advanced of any high school team in the state, and Coffman was a big part of that advantage the Rebels had on Friday nights.

“You talk about a lot of time — and these guys get no credit at all — but they put in so much time,” former Boyle football coach Chuck Smith said. “Braydon came to practice every single day, films practice and by the time we get out of practice and are ready to watch some film, it’s already been uploaded and the coaches can watch that day’s practice. That is a huge benefit for our football program. There’s no other program in the state that can say they do that.”

“It takes a lot of dedication for somebody to come out and film, run the drone out in practice and deal with all the technology that we use and upload that to Hudl for for the coaches to have access to,” video coordinator Damon Laymon said. “Like coach Smith said, it’s really more of a job and Braydon rose to the occasion.”

“We don’t have a tape measure here, but we can probably get Braydon to fly a drone in here and land it wherever you need it,” he said to a room full of laughter. “It’s quite a bit of work, what he does.”

Coffman has been with the Boyle football program for five years, since he was an eighth grader.

“He loved the football team and wanted to be a part of it. For five years, he busted his butt,” Laymon said. “Any day you’d see the players out there and the coaches out there, he’d be out there too.”

“Braydon led the crew of about five or six guys — Boyle County is really going to miss him and it’s going to be to Campbellsville’s advantage,” Smith added. “They’re getting a quality young man as well. He’s very well raised.”

One of Campbellsville’s coaches already knows the benefit that Coffman brings. Coach Chris Pardue recently filled the position of offensive coordinator after retiring from the same post at Boyle County this winter.

“Good luck to you over there Braydon,” Smith said. “I know you and coach Pardue are going to change the culture of Campbellsville football.”

Reiley Colwick will be joining his quarterback Reed Lanter at Centre College next fall after signing his letter of intent... read more