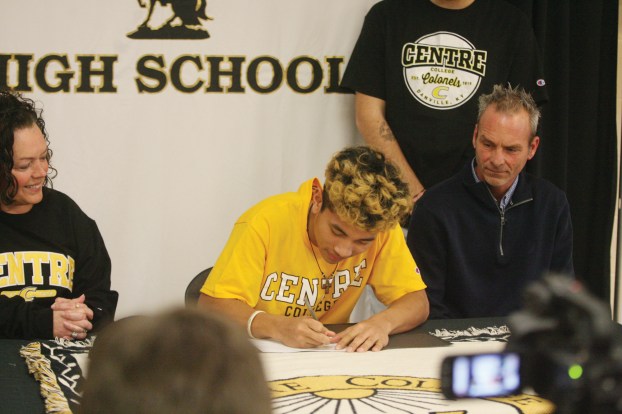 Reiley Colwick will be joining his quarterback Reed Lanter at Centre College next fall after signing his letter of intent on Wednesday’s National Signing Day.

“It’s an honor to talk about Reiley because he’s one of the best football players we’ve had on our football team for a long time. He’s an impact player,” former coach Chuck Smith said about the receiver.

Colwick closed out his career at Boyle County with 2,039 yards receiving and 17 touchdowns. But he saved his best effort for the last game of his career.

In the state championship, he caught a team best 13 balls for 127 yards and a touchdown. It felt like every time the Rebels needed a key play made, they went to Colwick.

“I always called him the unsung hero — I never thought he got the credit that he deserved with his play and performance and quality on the field,” Smith said about the receiver.

Centre College had been looking at Colwick since 2017 when he was a part of Boyle County’s state championship team as a sophomore and it was clear that he was a priority for them. One of the biggest reasons for that was his toughness — evidenced by him playing with a broken hand for several games last season.

“I don’t know what Reiley sees when he looks in the mirror — but I believe it’s 6-foot-2, 215 because he’s one of the toughest guys on our football team,” Smith said. “He never backed down from anybody and never will. I know he’ll take that with him to Centre College and I believe he’ll be an immediate impact player for them. Because he’s that kind of quality player and person as well.”

After a lot of deliberation about where he was going to continue his football career in college, Darrian Bell signed... read more