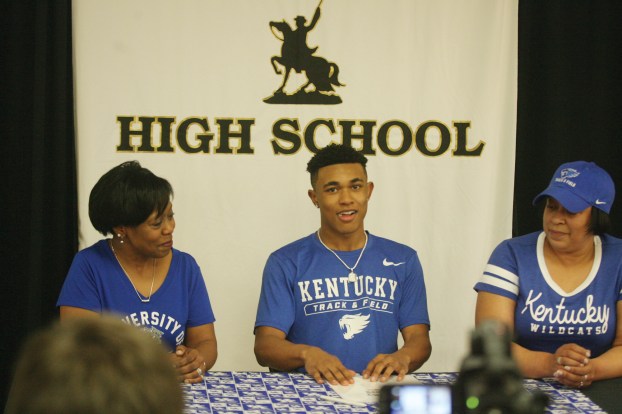 On Wednesday’s National Signing Day, Boyle County track and field star made it official as he signed his letter of intent to go to the University of Kentucky.

“I had choices. It was between UK, Cincinnati, Georgetown, Campbellsville,” Kinley said about the recruiting process. “But UK just felt like the best fit. I just felt it in my gut.”

Former Boyle track and field coach Brent Wagner attempted to list all of Kinley’s accomplishments that led to his signing with the SEC school.

He is one of three Rebels to run the 100-meter in under 10.2 seconds. He was part of Boyle’s back-to-back state champions in 2018 and 2019. He was part of the 4×100-meter relay teams that won the state championship in consecutive years. He holds the school record in the triple jump (48 ft 2.25 inches — or almost the width of a basketball court). He finished eighth nationally in the long jump at the New Balance Indoor Nationals in New York and finished second in the triple jump and first in the long jump at the Junior Olympic Nationals in North Carolina this summer.

“We are looking at a national champion and All-American in Marquise Kinley,” Wagner said.

“It’s beautiful is what it really is,” Kinley said about having all of his career accomplishments listed out loud. “I’ve really put my all into this and work as hard as I can. It all pays off in the end when you put in the work.”

He had to bring a visual aid — a tape measure held with the assistance of Kinley’s track and field teammate Gray Rahbany — to show how far Kinley’s best long jump mark was. It was 24 feet, 4 inches.

“Honestly it’s hard to put it into words. It’s more of a feeling,” Kinley said about that jump. “When you take that jump and you know it’s going to be a really good jump. You’ve just got to focus and know your distance and what your marks are. If you hit your marks, it all should be good. As soon as landed — I’d jumped 24 feet flat previously so I didn’t know if it was as far as that, but once it said 24.4, I was just like ‘yeah.’”

Wagner said that in 2018, before Boyle’s first of their two straight titles, an alumnus approached him asking about jumpers.

“You know the guys who do the long jump in the Olympics who when they jump it looks like they’re running on air? That’s Marquise Kinley,” Wagner recalls telling him. “Then he watched Marquise jump and when I tried to talk to him about the rest of the jumpers, he wasn’t listening to me — he was just watching Marquise jump.”

Wagner said that the thing he’ll remember most about Kinley isn’t just the stellar performances, but his work ethic.

For Kinley, the chance to continue his track and field career at the University of Kentucky is a fulfillment of a lifelong dream.

“I’ve always dreamed of going to a big school like that. I’m glad Kentucky chose me so I could continue to do what I’ve been doing in high school.”

After a lot of deliberation about where he was going to continue his football career in college, Darrian Bell signed... read more