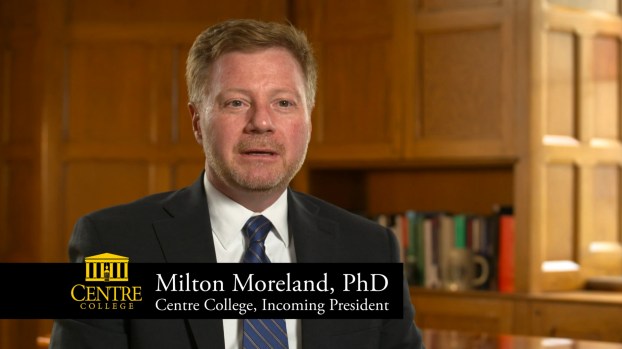 When Centre College announced its next president, Milton Moreland, Wednesday morning, it introduced Moreland to the community with a welcome video, available to watch online now.

The video features some of Moreland’s thoughts about Centre, as well as thoughts from many leaders in the Centre community about why they like the pick for the successor to current President John Roush, who is retiring June 30, after 22 years leading the college.

“Inclusion for Centre is so important because every student at Centre, every faculty member at Centre needs to know that Centre is their home,” Moreland says in the video. “It is a place that welcomes them, that provides a space for them to think and grapple with the world. It provides a space for them to really take on the challenges and the rigor of a Centre education, but have support.” 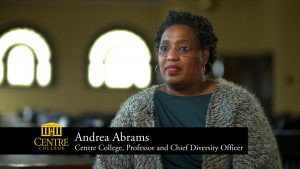 Andrea Abrams, chief diversity officer for Centre, says Moreland’s leadership on “issues of diversity and inclusion” made her comfortable with him and “excited by him.”

“He has been very proactive in his other positions about working towards diversity and inclusion beyond the words — actually using policy,” Abrams says in the video.

“He gets it,” Snyder says during the video. “He’s really been on a forefront at other universities and colleges of diversifying the staff and diversifying the student body and understands that with diversification comes the need for new resources, that everyone needs different support. And he has demonstrated — at least to me and to the (presidential search) committee — that he’s really competent in that area and is able to do that.”

Moreland is coming to Centre from Rhodes College, where he is provost and vice president of academic affairs. The video features comments from Rhodes College President Marjorie Hass, who says he is as comfortable attending a basketball game as he is working in a board room.

I think what comes across when you interact with Milton is his integrity and his passion,” Hass says. “He is an outstanding listener and he enjoys being involved with all of the different kinds of constituencies on a college campus.”

Moreland also takes the opportunity to brag on Centre’s accomplishments to date during the video.

“Centre is literally one of the top colleges in the nation and  certainly as a residential liberal arts college for 200 years, has established an amazing tradition of producing some of the finest scholars and teachers, artists, thought leaders, people who drive our economy. It’s an incredible alumni base,” Moreland says in the video “… we appreciate so much what the foundation is there and we are excited to help build on that foundation and grow Centre into a ongoing amazing college for all students.”

Wilson says, “I think (Moreland) has the opportunity to help us at Centre grow and develop into a place where we have increasing influence in our communities and in our state and in the country, in the world.”

The Centre community will have its first opportunity to meet President-elect Moreland and his family at an All-Campus Assembly in Newlin Hall at the Norton Center for the Arts on Thursday, February 6 at 7 p.m., which will be followed by a public reception.