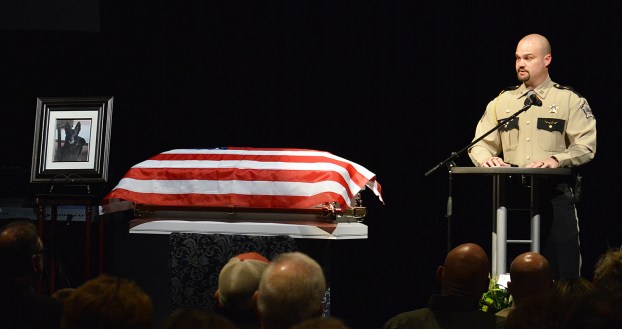 The Boyle County Sheriff’s Office could have a new K9 officer working with Deputy Casey McCoy as soon as April if plans go smoothly.

McCoy lost his previous K9 partner Niki when she died from injuries sustained in a two-vehicle wreck on Dec. 31. McCoy and Niki were on duty but not responding to a call when McCoy’s vehicle was involved in a wreck on the Danville bypass, in front of Cattleman’s Steakhouse. McCoy received stitches to his hand but Niki was taken to the Animal Hospital of Danville, just across the highway from where the accident occurred, where she later died due to her injuries from the crash.

“Casey wasn’t sure if he wanted another dog initially, because it was so hard,” Sheriff Derek Robbins said. “… But once you’re a K9 handler, it’s in your blood and it’s just what you do. So he’s excited to start a different journey with another dog.

“Niki was irreplaceable, but this will help, for sure.”

McCoy will be traveling to Florida probably next week to meet with dogs that could be his next partner at the company that the sheriff’s office has called on multiple times for trained K9 officers. It will be important to pick out a dog that can interact with McCoy’s family well, Robbins said.

“You want a specific temperament because he has children, he has a wife,” Robbins explained. “And (the dog) becomes part of your family, so you don’t necessarily want a dog that’s not social.”

Once a dog is picked out, McCoy will return to Florida sometime in March to complete a training course with his new partner that could last up to six weeks. If everything goes well, McCoy and his new partner will be “ready for the road” in April, Robbins said.

Acquiring a new K9 officer isn’t cheap. Robbins said the price for the dog alone is $13,500 — which is $500 cheaper than usual because the company is giving the sheriff’s office a discount for being a repeat customer.

On top of that, there’s food and lodging costs for McCoy during the six weeks of training, which can bump the total cost up to around $17,000 or $18,000, Robbins said.

But the sheriff’s office is getting some help from insurance through the Kentucky Association of Counties, because it did have Niki insured. Robbin said KACo likely won’t pay the full cost of the new dog, but his office’s coverage will likely provide for the bulk of the cost.

Some local community members have also offered financial assistance without being asked to do so, Robbins added.

“They had people offering and they called and said, ‘Hey, if you’ll open an account, we’ve got money for you,” he said. “It was just people wanting to help. So that’s been pretty cool. It’s been pretty difficult — we’ve never gone through anything like this. So we appreciate the community pitching in to help.”

Robbin said while the sheriff’s office is down by a dog currently, it hasn’t affected deputies’ ability to respond to calls.

“There’s just maybe not as much proactivity,” he said, explaining how K9 officers are still available whenever needed, but there are fewer times when K9 officers are going out and actively searching for drugs, for example. “It hasn’t really hampered our ability to respond … our response is still the same.”

Danville is getting its own craft burger joint, which could be open as soon as April. Beau and Nicole Cacciatore,... read more