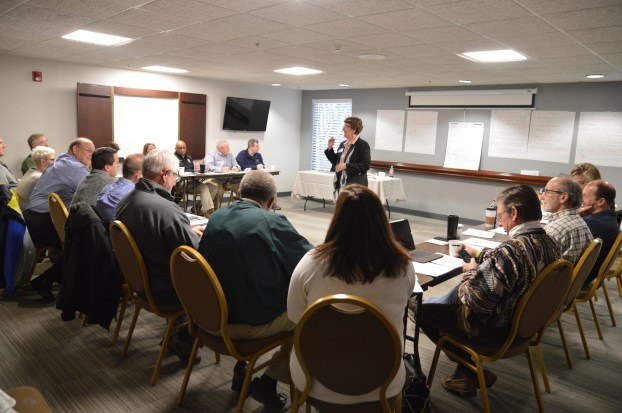 Department heads from the City of Danville, along with city commissioners, met Thursday to discuss upcoming initiatives in order to prepare for budget season. Randi Frank, center, of Slavin Management Consultants, was the facilitator. (Bobbie Curd photo)

Editor’s note: This is the first of a series on goals and objectives city leaders met to discuss during the annual City of Danville retreat.

Danville department heads and city officials met Thursday to discuss a lengthy list of goals to work toward — all a part of the city’s annual retreat, gearing up for the annual budget season.

But this year, new City Manager David Milliron switched things up a bit: The session was facilitated by human resources consultant Randi Frank of Slavin Management Consultants, the firm that led the search in finding both Milliron and new HR Director Randy Boyd.

Milliron, who was officially sworn in on Jan. 15 and is quickly becoming known for his hands-on management style with team-building exercises at weekly department-head meetings, wanted to start the session with each employee introducing themselves and offering a “unique fact” no one knows about them. The four-hour meeting began with some light-hearted open talk and laughter. City Attorney Stephen Dexter offered that he’s played piano since a child and is on keyboards for a band; Municipal Utility Engineer Earl Coffey said he’s flown both a plane and a helicopter.

Commissioner Kevin Caudill said he is a guitarist, “and apparently not good enough to be in Stephen’s daggone band …”

Mayor Mike Perros said since this is Danville, “everybody knows pretty much everything about everybody,” but added he’s been an avid drummer since he was 5. “And like Kevin, I guess I’m not good enough to join the band either.”

Dexter jokingly replied, “We run with a different crowd, Mayor.”

Economic Development Partnership President/CEO Jody Lassiter said he got an honorable mention at a county fair when he was 5-years-old, “with a runt Hampshire hog I raised, named Arnold.”

Milliron said he was a former investigative journalist for 20 years, having worked as a “Department of Defense Pentagon press correspondent,” and was trained on how to get the news out in the case of a nuclear disaster, which he still hasn’t exactly figured out.

IT Director Nick Warren surprised many who didn’t know he’s worked for the city since he was 17, while Commissioner Denise Terry said she and Warren worked together as teens at Baskin Robbins before he began working for Danville.

911 Communications Director Rebecca Hafley started with the city when she was 18, and Police Chief Tony Gray is on his 25th year. These lengthy tenures are more common than not among the department heads, and it was easy to see the amount of experience and knowledge gathered around the table.

Milliron set up the retreat as more of a brainstorming session to tap into employees’ and officials’ ideas of where the city needs to improve, including wish lists, as well as more immediate goals.

Ideas for change or new initiatives were written on posters at the front of the meeting room, with some that were presubmitted by commissioners and fleshed out. At the end of the meeting, commissioners were asked to rank each item based on importance to them. Milliron said the next step is putting together the list of objectives in a cohesive manner for more feedback. 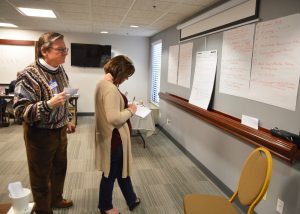 “Then, once consensus is reached, we will put forth for the commission to adopt,” he said.

There were 11 initiatives that came up as priorities, with a rough synopsis of each. Economic development was a point for many, with “restructure the EDP” being one of the biggest vote-getters.

Some said there needed to be a city-controlled point of contact for business development, as well as the more effective incentives for commercial development. Hiring a “promoter and deal-maker to sell the city” was also listed, along with a one-stop economic development process.

Frank said a city contact and deal-maker “are basically the same kind of person,” and that in her experience, “a lot of city managers become the economic development director.”

Commissioner Rick Serres said he’d like to hear from Lassiter.

“I don’t know specifically what the background (is) for some of those suggestions,” Lassiter said.

He said the EDP has been having conversations about where future industrial development would go, “because we can see a date certain in the future where we would utilize all of the land in the current industrial park.”

Current conversations with the city, county and Boyle County Industrial Foundation have revolved around how that will be financed and addressed, he said.

Lassiter said in a day’s work, he does interface with so many staff at the city that he would be supportive “of a one-stop ombudsman that basically smooths the wrinkles … Perhaps if there is an ombudsman role. I kind of function in that way as cover for the city and put (things) together behind the scenes, so the client doesn’t see all of the sausage-making, as to how we’re trying to smooth out the red tape and deal with the regulatory issues, and that includes P&Z,” Lassiter said. 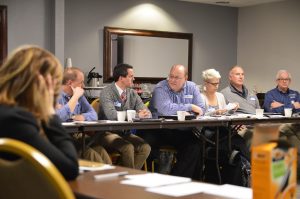 Milliron said the commission has to figure out if they want to “change things up or alter things” so that the EDP has clear direction on what the governing body wants, whether that’s a point of contact on staff or a different relationship.

“The city has to be in the driver’s seat because they’re the one contracting the services, if you will,” he said. “(I’m) not throwing that out there to upset the apple cart, but it’s the commission — their policy, their money …”

Frank asked about keeping the additional contact person on city staff on the list. Milliron said that’s a discussion for the commission. “I believe that one member of the commission put that up there. As I always tell folks, I work for whoever gives me three votes, and move forward and so, that’s where the consensus comes from. It doesn’t really come from staff …”

Other top vote-getters included some major projects, such as finishing the streetscape for Main Street, developing plans for an aquatic center and much-needed community center, and assessing local transportation needs, including for tourists, cyclists and walkability factors for citizens.

Some other priorities included integrating public relations into the city, including more communication with the public coming out of city hall, making citizens more aware of services. Other PR issues included some type of branding, and an improved website.

Several were focused on employee issues, such as the retention and recruitment of staff, with an emphasis on police and fire, and streamlining the hiring process. Within that area, a review of the city’s full compensation plan, including a realignment of salary schedules and health insurance, and updating the employee handbook were also discussed.

More than one person said “improving morale” with current city employees was a major concern.

“The morale, the issue — yeah, it’s there,” Milliron said. “I’m not going to hide behind it and say, ‘We don’t have a morale problem.’ Of course we do. What place doesn’t? It’s just what level of where the morale is. So we’re going to change it up here …”

Terry said commissioners used to get some type of information about resignations, but that isn’t happening anymore. “I think the mindset behind that was, well, what are we going to do about that?” She said commissioners get the recommendations of who’s coming in, but she feels they also need to know who’s going out.

“Because I did not know we had lost so many 911 and police officers. I did not know that we were almost to a critical level in both departments,” she said.

Terry said information should be relayed to the commission about why people are leaving, such as if they are going to different departments or different jobs all together.

Terry went on to discuss some restructuring of some departments, and how some things needed to be looked at, as far as who reported to who; “I’m not sure that we did that quite the way we should have …”

City Attorney Dexter said from an administrative standpoint, “and to keep everybody in their right place,” it’s critical that the city manager advises on those structural ideas, and that organizational charts are part of his responsibility as manager.

“The commission itself should not have … a role in setting the chart,” he said. But commissioners can voice concerns about it.

Frank reminded the commission that one of the things spoken about during the recruitment and interviewing process for a city manager was having them review the organizational setup of the city.

Terry said, “When I saw ‘we,” I mean with the city manager.”

Dexter said it’s important for the new city manager to be able to look at the setup for some amount of time, “without the influx of any true influence.”

“You hired him to provide expertise and a new set of eyes that will be lost if not left alone to make his own evaluations of the state of affairs.”

He said the commission needs to let Milliron get his feet wet, even though they can all look at the organization structure, “and say, first of all that’s not the way it’s operating, and second … it’s not efficient. But David needs to internalize that and make recommendations.”

Milliron said the management team knows “I’m asking a lot of questions,” and some of them felt a bit nervous about it, but he’s only trying to figure out how things work here. He said he’s not making any drastic changes off the bat, but he’s open to suggestions “… until I’m convinced that there’s a better, more efficient way to do it. But I challenge them (department heads) to find that and come back to me first. It’s not my job to tell them how to do their job more efficient and effectively.” 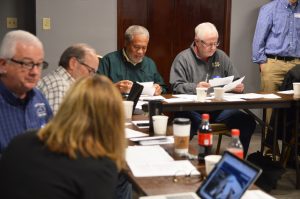 City Commissioners J.H. Atkins, left, and Kevin Caudill work on rating the most important goals and objectives on a compiled list during the city’s annual retreat held Thursday. Atkins insisted on employee morale staying on the goals list because of events from 2019. (Bobbie Curd photo)

Later in the meeting, Commissioner J.H. Atkins said 2020 will be a very important year for him, “because 2019 was not a very productive year, when it comes to staff morale. I’m not going to let us go through 2020 … without us focusing on staff morale. We had a whole bunch of stuff happen last year, and we have a whole bunch of new faces coming in this year.”

He said he didn’t want anyone to lose the focus on employee morale. “We have got to do something about that.”

Milliron also added at one point that if there remains a morale issue with employees, it’s the responsibility of the city manager.

“Then you should fire your city manager,” he said.

Snow cancels school and makes roadways dangerous, but also offers fun for some

The weather forecast for Danville and Boyle County for Friday predicted between one and four inches of snow accumulation, according... read more