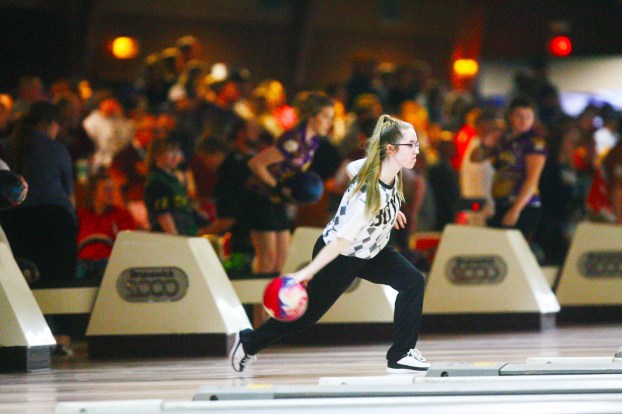 Emily Readnour says that she's accomplished all her goals in her senior year. (Photo Derek Brightwell)

Senior Spotlight: Readnour proud of her achievements, ready for future

As I was leaving Louisville’s Executive Strike and Spare Lanes following Thursday’s KHSAA State Championship bowling tournament for individual bowlers, Boyle senior Emily Readnour’s mother stopped me to tell me how proud she was of her daughter.

And she should be.

Readnour finished as the runner up in the regional competition and earned a stop in the final eight at the state tournament.

“This season has been pretty good. I’m not trying to be cocky or anything,” she said looking at her eighth place medal. “I think I made all five All-Tournament teams this season. I got eighth in state, runner-up in region. I accomplished all my goals, so I’ve been pretty happy.”

Readnor has always been a competitive person. Before focusing on bowling at the high school level, she ran cross country as well as playing basketball and softball. Now that she’s a full-time bowler, she’s been able to improve a lot on the lanes.

And she still has that competitive drive — it’s still her favorite thing about the sport.

Readnour’s older brother was on the team, and when she went to a practice with her mom and sister, one of Boyle’s coaches noticed her and recruited her. She was in seventh grade and has been bowling ever since.

On that day, Readnour said she shot “a 90 or something.” That’s pretty good for a seventh grader, but now her standards have gotten just a little higher. Her highest game? “Just a 256.” Her average entering Thursday’s play was a 193 — and that’s gone up after her performance.

When she found out that she qualified for the semifinals she ran up to her coach Jed Roth and excitedly told him the news. She couldn’t hide her smile, and was literally jumping with joy and excitement.

Afterwards, she was still excited and smiling until it dawned on her that her bowling career at Boyle County was ending. But that doesn’t mean she’s not going to be bowling at the next level.

“Hopefully Campbellsville. I’m still touring some colleges and visiting but I think Campbellsville is going to be my choice,” she said.

Beyond bowling, Readnour keeps it simple. Her favorite thing to do? “Probably sleep,” she said, laughing.

But in the classroom, she gets a little more complex. Her favorite subjects are chemistry and biology and after college, she wants to pursue a job teaching biology in high school.

“I had biology my sophomore year and towards the end of the year I started to think that I really wanted to do this,” she said. “I had chemistry my junior year and yeah, I clicked with her. I could tell her anything. It really helps.”

But Readnour credits bowling for helping her get to this point in her life. And her advice to kids about to begin their own high school careers is both simple and solid.

“Find something that you will love to keep you going and to keep motivation,” she said after thinking the question over for a while. “For me, it was definitely bowling. If it wasn’t for bowling, I probably would’ve been homeschooled, really. You just have to find something to motivate you and keep you happy.”