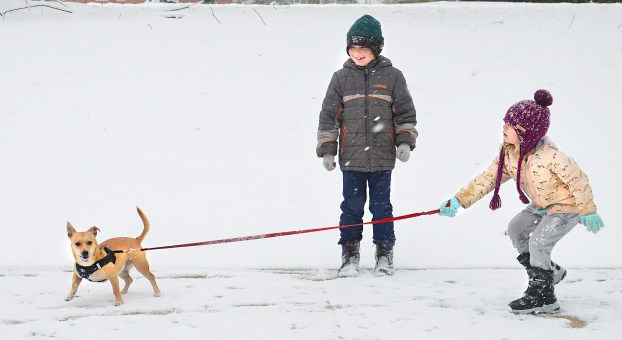 June Cocanougher tries to hold on to her family's dog, Monkey, as her brother, Eli watches in front of Toliver Intermediate School Friday morning. The sibblings were walking in the snow with their mom, Leigh, and were heading to the playground. (Photo by Robin Hart)

Snow cancels school and makes roadways dangerous, but also offers fun for some

The weather forecast for Danville and Boyle County for Friday predicted between one and four inches of snow accumulation, according to Boyle County Emergency Management Services Director Mike Wilder. “And we got it.”

Wilder said the Danville area snow measured about two inches and in the west end of the county “maybe a little more,” Wilder said. But someone in the Forkland area reported just under three inches. 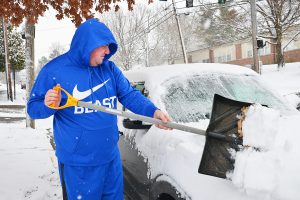 Todd Claunch shovels snow off of his wife’s vehicle that was parked in front of their home on East Main Street Thursday morning. (Photo by Robin Hart)

Even though salt trucks were out Thursday night preparing streets and roads before the snowfall began, early Friday morning “was really a dicey situation” because the temperature dropped and the wet roads froze, Wilder said.

At least four cars spun off the highway, which blocked the southbound lanes for a while.

But many drivers continued to speed by anyway as emergency crews were helping vehicles out of ditches.

“People just need to slow down,” he said. 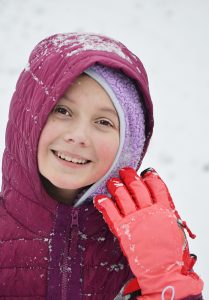 Mae Pierce smiles after sledding down and climbing back up the hill at the practice football field behind Danville High School early Friday morning. Mae was the first person on the hill Friday and said it was the first time this winter that she’s been able to sled. (Photo by Robin Hart) 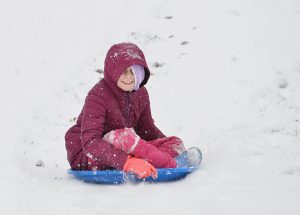 The city and county schools cancelled classes so Mae Pierce was the first sledder down the hill at Danville High School football practice field. By 8:30 Friday morning, Mae had already taken several trips down the hill on her bright blue sled. With a big smile on her face, Mae said it was the first time this winter she’d been able to go sledding.

According to the National Weather Service, Saturday’s chance of snow is 40% with a high of 30 and low of 24. Sunday is supposed to warm up, with a high of 51.