The Rev. John Edmund Wood was pastor of First Baptist Church at Second and Walnut streets for 31 years. While in Danville, he also was active in community, state and national affairs.

“He was one of the great outstanding leaders of his race in the nation,” according to information in his obituary on Dec. 16, 1929.

He served for seven years at the National Baptist Convention of America, the ruling organization of all the Baptist churches for black people. He was moderator for the state association convention in 1922.

Wood was also active in the Republican Party, and in 1912 was a delegate-at large from Kentucky to the National Republican Convention in Chicago, when Howard Taft was nominated for president.

Wood opened the convention with prayer — an honor never accorded before to a black person.

“He was a public speaker of remarkable ability and power,” according to the article.

Locally, Wood was a member of the Danville City Council for many years and always exhibited a progressive spirit. He ran in 1923 and promised to work for better roads and police protection.

“He stood for the highest ideals in the conduct of municipal affairs and occupied his position with humility, force and uprightness.”

Wood also was editor of the “Torchlight” newspaper in Danville, and was a member and active in the grand Lodge Knights of Pythias.

Wood  and his wife, Emma B., and children were living in Danville in 1910 through 1930, according to the Boyle County Census.

His mother, Fannie Wood, also lived in their household in 1910.

When he died, their children listed were Margaret Virginia Wood, a student in Washington City; and Frances Wood and Lola Soders, both of Chicago.

He also had a brother, F.M. Wood, a professor in Louisville, who was president of the Kentucky Association for Teachers.

Marguerite was a musician 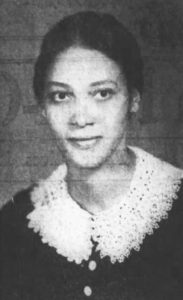 Wood’s youngest daughter, Marguerite Virginia, studied music and worked in a church while in New York.

She spoke at a Republican mass meeting at First Baptist Church, Second and Walnut streets, in September 1935. Admission was 10 cents and 5 cents.

Her program for the meeting consisted of ballads, classics and spirituals. She also appeared in a recital at First Baptist Church In 1935.

In addition to her work at the Abyssinian Church in New York, Marguerite continued to study music at Columbia University. She also compiled her own compositions.

She presented her music in almost every state in the Union, and in Mexico and Canada.

Marguerite, a contralto, was presented in June 1936 in a testimonial recital by Abyssinian Baptist Church in New York.

She studied during the summer of 1936 in Salzburg, Austria, and toured Vienna, a great music center of the world.

She had been director of music and club activities among the girls at Abyssinian Baptist Church and was granted a leave of absence to study voice in Europe.

By JERRY SAMPSON Personal Effects Question: Dear Jerry, I was going through some of my late father’s books and I... read more