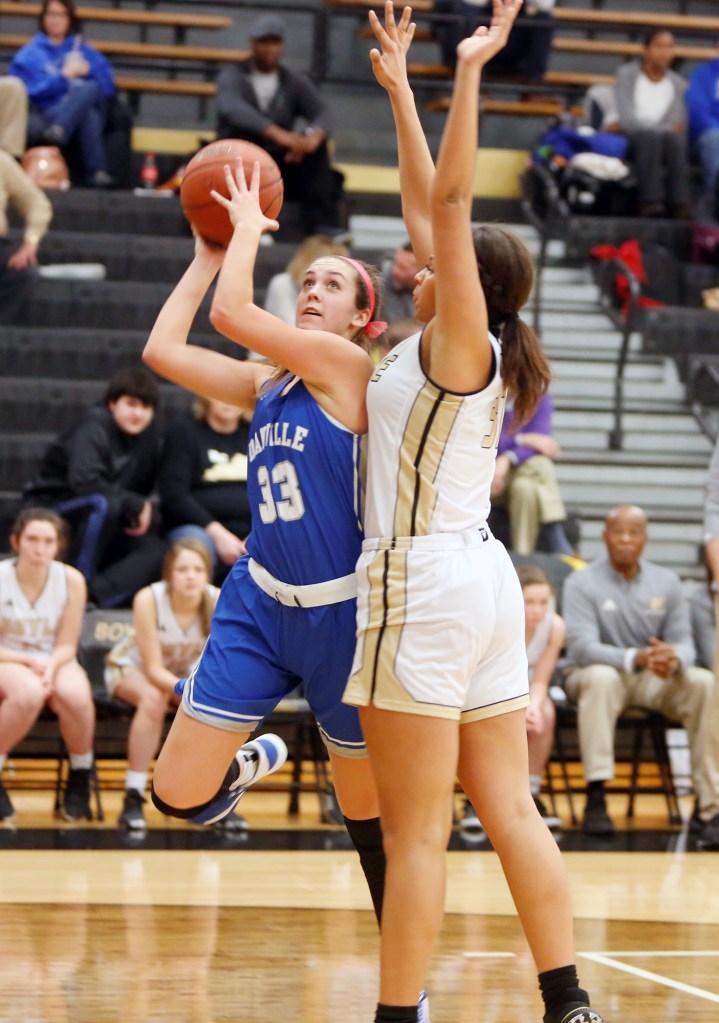 Judie Mason is no math teacher, but she has easily figured out that when it comes to the Danville girls, the whole is greater than the sum of their parts.

The Danville coach said her players work much better together than as individuals, and she saw both of those things manifested in the Lady Admirals’ 54-36 victory over Boyle County on Friday night.

The Lady Admirals’ strength in the first half proved to be far greater than their weakness in the second, as they got off to a hot start and opened a large lead in the second quarter that the Lady Rebels couldn’t put a dent in.

“We moved the ball, we listened to the scouting report (in the first half), and in the second half we were more individuals than we were a team,” Mason said. “We’re a really good team; we’re not really good individually. I don’t know that anybody on my team would make all-state or all-region, but I think we’re one of the better teams when we play well together.”

Visiting Danville (18-6, 5-0 45th District) proved that right from the opening tip Friday in a win over Boyle (7-16, 1-5) that, coupled with Lincoln County’s 56-52 loss to Garrard County on Friday night, secured for the Lady Admirals the No. 1 seed for the 45th District Tournament later this month. The Lady Admirals can complete a sweep of their district opponents with a win next Friday at Lincoln.

Lara Akers scored 15 points and Desiree Tandy added 11 to lead Danville, which scored the first eight points of the game before Boyle could even get up a shot.

“We got off to a bad start and didn’t recover. We just didn’t bounce back the way we want,” Boyle coach Ryan Wiersma said.

The Lady Admirals led 23-9 early in the second quarter and 28-14 at halftime, and they were up by as many as 25 points in the third quarter en route to their fifth straight win over their crosstown rivals before Boyle closed the gap in the fourth quarter.

“I thought we played hard the whole game, I just didn’t think we played smart the second half. But when you’re up that much teenagers do relax,” Mason said.

Boyle suffered its fourth straight loss, but Wiersma was encouraged by the way the Lady Rebels finished the game – they outscored Danville 8-4 over the final four minutes – and by some of the things they did in the second half.

Peyton Bugg led Boyle with 13 points, including eight in the fourth quarter. Wiersma said the Lady Rebels also got a boost late in the game from reserve Zoey Robbins.

“It’s a good way to move forward (to tonight’s game against Mercer County),” Wiersma said. “We’ve played so well recently; we just haven’t come out with any wins. But our level of play has been a lot higher than it was tonight, and we’ve just got to get back to doing the things that made us successful the last four or five games, that kept us in those games.”

Danville got 12 offensive rebounds in the first half and outrebounded Boyle 27-12 over the first two periods, but the Lady Rebels held a 21-11 edge on the boards in the second half.

Camryn Preston had a game-high nine rebounds and Madison Terrell added eight for the Lady Admirals; Emily Glasscock and Alyssa Wray had six boards each for the Lady Rebels.

Boyle puts it all together against Danville