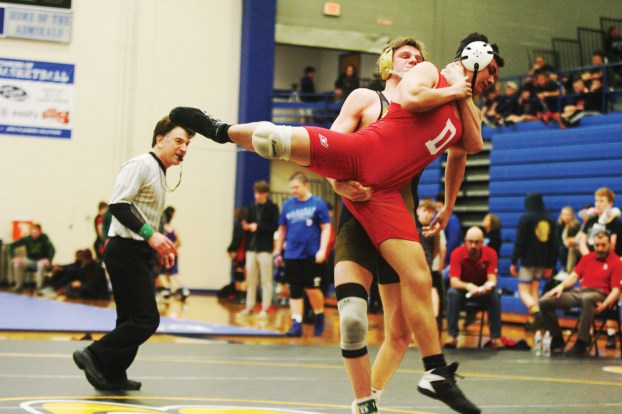 It was a hectic, emotional and proud evening for the Danville and Boyle County wrestling programs. But mostly, it was a successful one.

Boyle County walked out of Danville High School on Saturday with two regional championships and a total of three wrestlers to the state tournament in Lexington this weekend. Danville wasn’t able to bring home the top spot in the region, but had two runners up and also will be sending a total of three to Lexington.

“It was a good showing for us because we’re a very young team,” Boyle wrestling coach Seth Lucas said. “We have one senior and one junior. The rest are sophomores, freshmen and eighth graders. It was a great showing for those older guys.

“I don’t know the last time — since I’ve been here we haven’t had two region champs in the same year,” Lucas added. “It’s really big for those guys — especially to do it here in Boyle County. You’ve got the home crowd and all that. I’m really proud of those two — all the work they did in the off-season and during the season, being leaders on and off the mat.”

“Putting three in the state tournament was a big plus for us,” Danville coach Joey Sallee said.

Senior Jacob Robbins in the 170 weight class and junior Ben Rush in 182 took the top spot in the region for the Rebels. It’s Rush’s second straight regional win.

“I’m extremely proud of (Jacob) because I know he’s been working super hard. He’s got a good draw at the state tournament,” Lucas said. “He looked so dominant. Kids couldn’t take him down, they couldn’t even get at his legs. He just looks tough right now — physically and mentally he looks in good shape.

“(Ben’s) a big ol’ brute but man he’s got it going. I’d like to see more offense out of him next week. But I can’t really argue with it,” he added. “He kept up on offense, and kept attacking. He dominated in his last match — didn’t give up a point. Got takedowns, took bottom on the escape and then got another takedown. They were both so dominant the whole weekend. All of their matches the whole tournament, there wasn’t even a close match.”

For Danville, coming up short in the championship match could hardly be called a disappointment. Senior Morgan Sallee has been dealing with a shoulder injury all year, and looked to be in pain after winning the semifinal match. 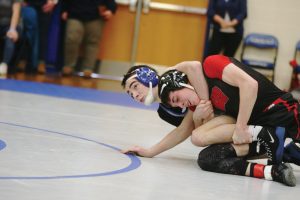 “I wanted to forfeit the finals, but he refused,” coach Sallee said. “Things were going well, he got in an awkward position, and tweaked the shoulder so I called the match. He will be ready to go next week. The shoulder is an on-going problem, so we just deal with it as best we can.”

Kadin McWilliams got the finals in 182 in just his second year wrestling.

“Kadin McWilliams is another success… He is an under-sized 182 pounder,” Sallee said. “We have to make sure he eats so he weighs enough to qualify for 182. He was so hard on himself after losing in the finals Saturday night. His goal this season was to make it to the state tournament, and he achieved it. Now he has to go make some noise in Lexington.”

Danville and Boyle were matched against each other in an emotional and high stakes consolation semifinal match to qualify for state.

Mical Chappell of Danville and Evan Browning of Boyle faced off against each other in a rematch from earlier in the year. Browning got the better of Chappell in that one, but it was the Admiral who was able to outlast his opponent and earn a spot in the state tournament.

“The consolation semifinals were big for Micah,” Sallee said. “This past weekend is without a doubt the best that I have seen him wrestle all year. I shed a few tears after that match. You get attached to kids. When they hurt you hurt, and when they succeed it chokes you up. Micah has been with us since the 6th grade. He quit at one point last season, but he came back and has worked extremely hard to get where he is at.”

Boyle was able to earn its third state qualifier at the 220 pound class thanks to sophomore Nate Rush.

“I’m so proud of Nate,” Lucas said. “He won matches we thought he could win. He pinned a guy that he hadn’t pinned all year in the second round. Last time he wrestled that guy, it went to OT and Nate pinned him. That shows the improvements he’s made all year — wrestling with Jacob and Ben and those guys that really know what they’re doing. You can see it his wrestling.”

After the win to qualify for state, Rush was all smiles, sticking his tongue out as his arm was raised. That’s the attitude Lucas says the he brings to the team every day.

“That’s just his mentality. He’s a tough kid and he keeps the mood light,” he said, referencing his celebration. “Even if he loses, he’s on to the next one.”

Despite the success at the top of the card for both the Admirals and Rebels, both coaches acknowledged that they have young teams that took some lumps.

“We had some things that did not go our way in a couple of matches, but the kids kept their heads up. We matured quite a bit over a two day period,” Sallee said. “I was impressed with several of the younger kids, especially our two big guys- Jaxsin Clontz at heavyweight and Chris Grier at 220.”

“The younger guys need to learn to win those tough matches like those older guys do. That comes with time,” Lucas said. “I mean, they wrestled great and I’m proud of them. I know a lot of them are upset with their performances, but it’s all a learning process. If you learn it now and learn it young, you won’t have to learn about it later in your career. You can fix it now.”

Lucas also said that it’s important for his young team to see the work that goes into qualifying for the state tournament.

“They see what those older guys do in the off-season and it really helps,” he said. “Those guys don’t take a break — they’ll finish up state here and they’re instantly training for the off-season tournament and those younger guys see them working and they’ll say ‘I want to be better than him…’

“It’s really easy to coach these guys because they’re all self-motivated, their parents are so supportive. It’s great that the younger guys get to see that. They’re setting the example and raising the standard each year.”

For Chappell and McWilliams, this coming weekend will be their first trip to the state tournament. Sallee says that it’s important for them to keep focused and not let the moment get to them.

“It can be overwhelming, so you have to relax, focus on having a solid week of practice, and then take it one match at a time,” he said. The only mat that matters is the one you are wrestling on.”

Judie Mason is no math teacher, but she has easily figured out that when it comes to the Danville girls,... read more