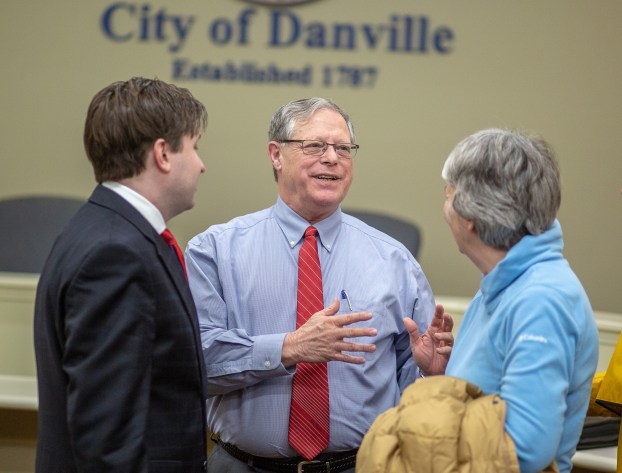 Boyle’s legislators down to help with Danville’s downtown safety

Safety in downtown Danville was a main topic of conversation during a “legislative coffee” town hall meeting at city hall Monday morning.

The public forum with Danville’s legislators — Rep. Daniel Elliott (R-Danville) and Sen. Rick Girdler (R-Somerset) — touched on many topics of local, state and national importance. But pedestrian safety in the heart of downtown kept cropping back up as a concern of local residents throughout the approximately 90-minute event.

Elliott and Girdler also met before the public event to discuss downtown safety issues with city leaders and six representatives of the local group Citizens United for Pedestrian Safety in Downtown Danville, or CUPIDD for short.

Girdler said residents’ desires for improvement could hopefully take priority if it will take money from Frankfort to make it happen. That’s because when it comes to what Kentucky spends money on, “safety is first; economic development is second,” he said. 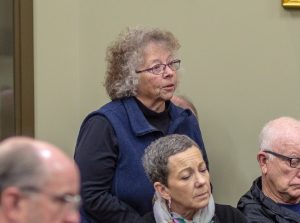 Virginia Eklund was the first resident to touch on the issue during the public forum. She said Lana Sue Cleveland, the woman hit and killed while crossing the street at Third and Main October, had been her friend.

The wreck that killed Cleveland and injured her friend, Shan S. Kihlman, reignited the current efforts to make downtown Danville safer for pedestrians.

“We need your support with the Department of Transportation,” Eklund told Elliott and Girdler. “I don’t think that this is necessarily a budget issue.”

Mary Robin Spoonamore, a leader of CUPIDD, thanked Elliott and Girdler for meeting with the group and agreeing to tackle an issue that “desperately needs attention.” 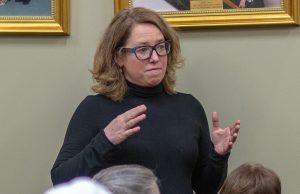 Spoonamore told Elliott and Girdler during the meeting that residents need their help to push “an out-of-the-box approach” for downtown Danville with Kentucky Transportation Secretary Jim Gray. She also noted full funding has yet to be secured for Danville’s planned streetscape project on Main Street between Second and Fourth streets, which would overhaul sidewalks, curbs, lights and more.

“We don’t need people being maimed or killed or hurt on any streets, anywhere,” Girdler said.

The state senator also recounted how on one of his first visits to Danville, he had inadvertently turned the wrong way down one of the one-way streets downtown.

Elliott said he appreciates the work done locally on the issue and noted he contacted the Transportation Cabinet soon after the fatal pedestrian wreck last year, asking state officials to come to Danville and reassess the intersection at Third and Main streets.

“I think they have done that, but it does appear any changes that have been made have been very minimal in nature,” Elliott said. “That is concerning to Sen. Girdler and I.”

Elliott said he has also made Secretary Gray aware of the problem.

“We value citizen input and the group you have put together has made a difference on this issue,” Elliott said. 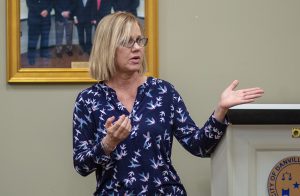 Another resident, Niki Kinkade, spoke later in the meeting about her family’s experiences. She works downtown at the Art Center of the Bluegrass, her husband works at Centre College and her whole family lives downtown, she explained.

“We are downtown folks and we are nervous about moving around as pedestrians,” she said.

Kinkade said her husband has been hit while biking and she has seen three different people get hit by cars, as well as numerous vehicle vs. vehicle wrecks.

Boyle County Magistrate Jason Cullen also addressed the problem. He said when he initially began pushing for safety improvements, the response he got back from the state was along the lines of “we traditionally don’t do that for this type of road.” 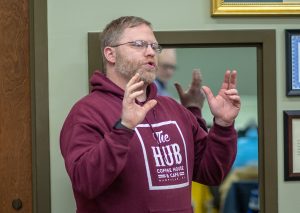 “That’s where we need you to kind of intervene and say, ‘This is not a traditional situation,'” Cullen said. “People are losing their lives. People are getting hit. There’s accidents happening. So we need to take a non-traditional look on how to make the citizens of Boyle County safe in that intersection.”

Cullen, who owns the Hub Coffee House and Café on the southeast corner of the Third and Main intersection, said he sees “the close calls all the time.”

“I jay-walk instead because it’s safer,” Cullen said. “… And honestly, it goes all the way down to Second Street. We need looks all the way (down Main Street) … it’s a beautiful town that we have and when we’re trying to invite more people downtown, we need to make it as safe as possible.”

Boyle County Magistrate Tom Ellis suggested Danville could add a crosswalk with flashing lights in the middle of a block, instead of at an intersection. He said he saw a crosswalk like that in Winchester many years ago and believes it could help make crossing Main Street safer. 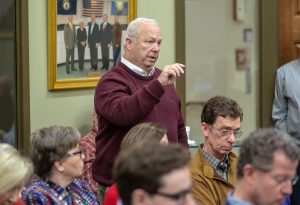 Boyle County Judge-Executive Howard Hunt said Danville and Boyle County leaders have already been working on the street safety and lighting issue, including by meeting with state officials, such as Kelly Baker with the Transportation Cabinet.

There are some ideas in the works, such as directional lighting mounted along Main Street to illuminate the “furthest, darkest” areas where pedestrians have to walk.

“It’s not like it’s being ignored whatsoever,” Hunt said. “… Main Street is abysmally dark with the lights along the sidewalks. A streetscape would improve on that greatly. So I’m working with Mayor (Mike) Perros to help bring those things into a greater focus.”

Girdler said he and Elliott were on-board to help in whatever way they could.

“We’re game for whatever you all want … I’m willing to do whatever it takes,” he said. “… Daniel — he’s got a pulse on Danville better than I do. I’m willing … to go to battle or go to whatever we’ve got to do.”

The front page of the Sunday, Feb. 11, 1990, edition of The Advocate-Messenger contained two stories that greatly impacted Danville,... read more